Sugar isn’t always sweet to German cockroaches, especially to the ones that avoid roach baits.

In a study published May 24 in the journal Science, North Carolina State University entomologists show the neural mechanism behind the aversion to glucose, the simple sugar that is a popular ingredient in roach-bait poison. Glucose sets off bitter receptors in roach taste buds, causing roaches to avoid foods that bring on this taste-bud reaction. This aversion has a genetic basis and it eventually spreads to offspring, resulting in increasingly large groups of cockroaches that reject glucose and any baits made with it.

The head of a male German cockroach, showing the four major external chemosensory paired appendages. The antennae extend upward (black compound eyes behind them), the longer maxillary palps and shorter labial palps extend downward, and the paired paraglossae are on either side of the mouth. Each appendage contains many sensory hairs, some of which function in gustation. A tastant is delivered to the mouth in a dyed (blue) drop of water. 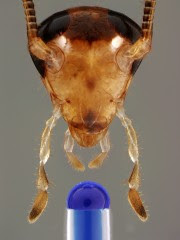 In normal German cockroaches, glucose elicits activity in sugar gustatory receptor neurons, which react when exposed to sugars like glucose and fructose – components of corn syrup, a common roach-bait ingredient. Generally, roaches have a sweet tooth for these sugars.

“We don’t know if glucose actually tastes bitter to glucose-averse roaches, but we do know that glucose triggers the bitter receptor neurons that would be triggered by caffeine or other bitter compounds,” says Dr. Coby Schal, the Blanton J. Whitmire Distinguished Professor of Entomology at NC State and the corresponding author of the paper. “That causes the glucose-averse roach to close its mouth and run away from glucose in tests.”

In the study, the researchers conducted tests on the roach tongue, the paired mouth appendages called paraglossae. The tests showed the unexpected electrophysiological reactions that glucose stimulates both sugar and bitter receptor neurons, confirming behavioral tests that showed roaches quickly fleeing from glucose when presented with it.

But it’s not just a sugar aversion. Roaches exposed to fructose were happy to partake of its sweetness.

Glucose-averse roaches that were forced to taste glucose refused to ingest the sugar, akin to a child who spits out her bitter-tasting food. Normal cockroaches, meanwhile, were happy to eat glucose. Researchers learned this by combining the glucose with food coloring and watching it get ingested or rejected by the normal or glucose-averse roaches, respectively.

Study co-author Dr. Jules Silverman, the Charles G. Wright Distinguished Professor of Entomology at NC State, discovered glucose aversion and described its inheritance pattern more than 20 years ago. “It is extremely gratifying that we now understand the neural mechanism that underlies this unusual, yet adaptive, behavior,” he said.

There is a cost, however, to cockroaches with glucose aversion. In the absence of glucose-toxicant mixtures, glucose-averse cockroaches grow more slowly than normal roaches in laboratory settings where there are no nutritional stresses. “Now we want to understand how this trait persists in nature, where the food supply is probably limited,” Silverman said. “Cockroaches have to adapt to a varied and unreliable food supply, and glucose-aversion places an additional restriction on obtaining adequate nutrition.”

Schal says that the pest-control arms race has mostly been about pests gaining resistance to the insecticides themselves. This paper, however, shows an arms race that includes behavioral resistance to certain types of food – in this case, glucose.

“Most times, genetic changes, or mutations, cause the loss of function,” Schal says. “In this case, the mutation resulted in the gain of a new function – triggering bitter receptors when glucose is introduced. This gives the cockroach a new behavior which is incredibly adaptive. These roaches just got ahead of us in the arms race.”

Ayako Wada-Katsumata, an NC State senior research scholar, performed most of the experiments and is the first author of the paper. She is now investigating whether roaches can learn to associate glucose with specific odors and thus use their memory to ignore baits that contain glucose. The research was supported by the National Science Foundation, the U.S. Department of Housing and Urban Development, and the Blanton J. Whitmire Endowment at NC State.