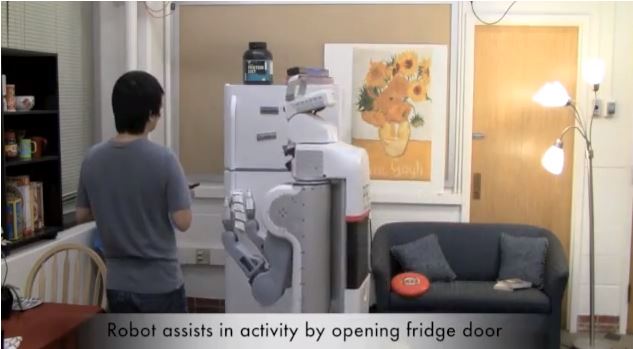 Understanding when and where to pour a beer or knowing when to offer assistance opening a refrigerator door can be difficult for a robot because of the many variables it encounters while assessing the situation. A team from Cornell has created a solution.

Gazing intently with a Microsoft Kinect 3-D camera and using a database of 3D videos, the Cornell robot identifies the activities it sees, considers what uses are possible with the objects in the scene and determines how those uses fit with the activities. It then generates a set of possible continuations into the future – such as eating, drinking, cleaning, putting away – and finally chooses the most probable. As the action continues, the robot constantly updates and refines its predictions.

"We extract the general principles of how people behave," said Ashutosh Saxena, Cornell professor of computer science and co-author of a new study tied to the research. "Drinking coffee is a big activity, but there are several parts to it." The robot builds a "vocabulary" of such small parts that it can put together in various ways to recognize a variety of big activities, he explained.

Saxena will join Cornell graduate student Hema S. Koppula as they present their research at the International Conference of Machine Learning, June 18-21 in Atlanta, and the Robotics: Science and Systems conference June 24-28 in Berlin, Germany.

"Even though humans are predictable, they are only predictable part of the time," Saxena said. "The future would be to figure out how the robot plans its action. Right now we are almost hard-coding the responses, but there should be a way for the robot to learn how to respond."

The research was supported by the U.S. Army Research Office, the Alfred E. Sloan Foundation and Microsoft.
Contacts and sources:
Syl Kacapyr
Cornell University
on May 28, 2013