If all the light emitted by all galaxies in the observable universe at all wavelengths during all of cosmic history were known, it would clue astronomers about the entire history of galaxy formation and evolution, and provide insights to key aspects of the expansion history of the universe.

Alberto Domínguez is a a postdoctoral researcher in the Department of Physics and Astronomy at UC Riverside. 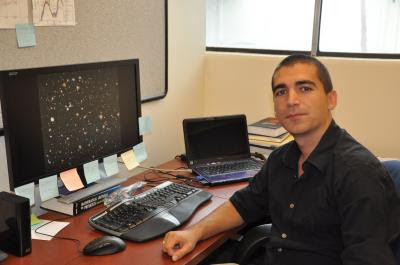 But measuring this light — known as extragalactic background light (EBL) — is no simple task, complicated by the fact that Earth is lodged inside a bright solar system and the Milky Way, a very bright galaxy, making it enormously difficult for ground-based and space-based telescopes to reliably measure EBL. Furthermore, current galaxy surveys being used to estimate EBL could very well be missing information from faint galaxies and other sources.

Enter now a team of astronomers who have come up with a solution that ingeniously overcomes the technical challenges of measuring EBL. They propose in a paper published May 24 in The Astrophysical Journal that one answer to the problem of measuring EBL lies in measuring the attenuation — or weakening — of very high-energy gamma rays from distant "blazars," which are supermassive black holes in the centers of galaxies.

"The EBL only affects gamma-ray photons that are more energetic than approximately 30 GeV (a unit of energy equal to billion electron volts)," explained Alberto Domínguez, a postdoctoral researcher in the Department of Physics and Astronomy at the University of California, Riverside and the lead author of the research paper. "This gamma-ray attenuation occurs when high-energy gamma rays from the blazars hit EBL photons and produce electrons and positrons. By measuring the attenuation, we can get an estimate for the total EBL."

By applying their methodology to blazars located at different distances (or different ages of the universe), Domínguez and colleagues were able to measure EBL out to five billion years ago.

"Five billion years ago is the maximum distance we are able to probe with our current technology," Domínguez said. "Sure, there are blazars farther away, but we are not able to detect them because the high-energy gamma rays they are emitting are too attenuated by EBL when they get to us — so weakened that our instruments are not sensitive enough to detect them."

Domínguez explained that to estimate the EBL using the attenuation of gamma-rays emitted by a blazar in the local universe, light from the beginning of galaxy formation in the local universe until now is measured. But by using blazars at different distances, EBL evolution can be studied and characterized, and how it was built up over cosmic time can be better understood. This has now been achieved by the UCR-led team of astronomers.

Domínguez and colleagues used blazar observations from the Fermi Gamma-ray Space Telescope as well as a combination of simultaneously-made observations for the same blazars from NASA's X-ray satellites Swift and Rossi X-ray Timing Explorer. These satellites measure gamma-ray photons with low energy, the kind that are unattenuated by EBL. The measurements allowed the researchers to predict, using models of blazar photon emission, the unattenuated gamma-ray brightness at higher energies (more than 30 GeV). Then, they compared these predictions with detections made by ground-based atmospheric Čerenkov telescopes, which provide attenuated gamma-ray data.

"A comparison between the predicted unattenuated gamma-ray brightness at energies larger than 30 GeV, and the detected attenuated brightness at energies larger than 30 GeV by the Čerenkov telescopes allows us to estimate the cosmic gamma-ray horizon that is directly related to EBL attenuation," said Justin D. Finke at the U.S. Naval Research Laboratory in Wash., D.C., and a coauthor on the paper.

The researchers explained that measuring this horizon is important because it gives an estimate of EBL attenuation over distance/age of the universe, which is essential to understand the evolution of the EBL and, therefore, about the star-formation history of galaxies.

"Our achievement also will allow us to extract information about the properties of the universe, such as its expansion rate, using a novel technique based on our results," said Francisco Prada at the Institute of Theoretical Physics, Madrid, Spain, and a coauthor on the paper.

The researchers found that the attenuation of blazar gamma rays, as measured by the Čerenkov telescopes, is in agreement with the EBL expected from galaxies detected by current surveys (such as surveys made by GALEX, Hubble, and Spitzer telescopes) and from modeling the evolution of the galaxy population.

"This agreement shows that the sorts of galaxies we observed are indeed responsible for most of the light in the universe," Domínguez said. "In other words, the EBL contribution from faint galaxies and other sources should be very low."

Said Joel Primack, a professor of physics at the UC Santa Cruz, the director of the University of California High-Performance AstroComputing Center, and a coauthor on the paper, "This means that faint galaxies that will be detected by the next generation of infrared telescopes, such as the NASA James Webb Space Telescope, will not contribute significantly to the total EBL we see today."

The research paper can also be found on the public repository arXiv here.

The research was supported by grants from NASA; the U.S. National Science Foundation; the Ministerio de Ciencia e Innovación, Spain through the Multidark Consolider; the Istituto Nazionale di Astrofisica, Italy; and the National d'Études Spatiales, France. Additional support was provided by a Fermi Guest Investigator grant.


Contacts and sources:
Iqbal Pittalwala
University of California - Riverside
on May 24, 2013