What Went Wrong In West, Texas — And Where Were The Regulators?

A week after a blast at a Texas fertilizer plant killed at least 15 people and hurt more than 200, authorities still don’t know exactly why the West Chemical and Fertilizer Company plant exploded.

Here’s what we do know: The fertilizer plant hadn’t been inspected by the Occupational Safety and Health Administration since 1985. Its owners do not seem to have told the Department of Homeland Security that they were storing large quantities of potentially explosive fertilizer, as regulations require. And the most recent partial safety inspection of the facility in 2011 led to $5,250 in fines. 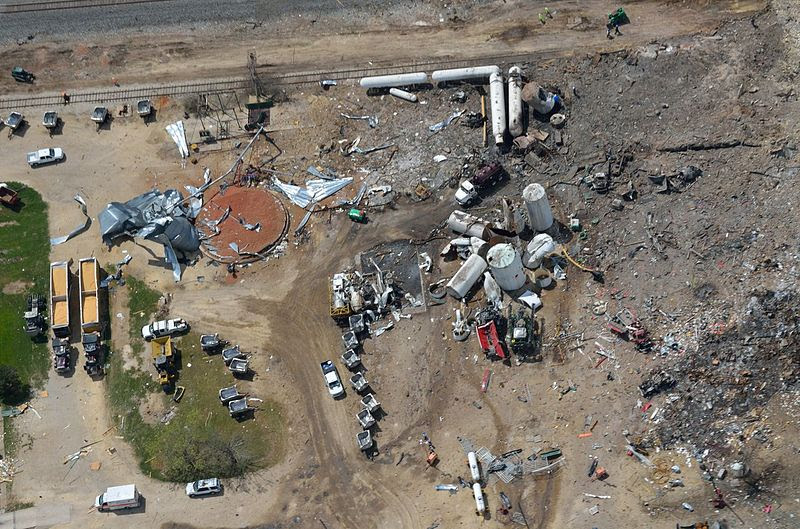 We’ve laid out which agencies were in charge of regulating the plant and who’s investigating the explosion now.

Around 7:30 p.m. on April 17, a fire broke out at the West Chemical and Fertilizer Company plant in West, Texas, a small town of about 2,800 people 75 miles south of Dallas. Twenty minutes later, it blew up. The explosion shook houses 50 miles away and was so powerful that the United States Geological Survey registered it as a 2.1-magnitude earthquake. It flattened homes within a five-block radius and destroyed a nursing home, an apartment complex, and a nearby middle school. According to the New York Times, the blast left a crater 93 feet wide and 10 feet deep, and the fire “burned with such intensity that railroad tracks were fused.”

The blast killed at least 15 people, most of them firefighters and other first responders.

Have fertilizer plants ever exploded before?

But fertilizer plants are safer now, said Stephen Slater, the Iowa administrator of the Occupational Safety and Health Administration. “All kinds of technologies have had huge improvements,” he told the Des Moines Register. “And we haven’t had any bad experiences at the plants in the 20 years since [the accident]. I’m knocking on wood.” (Slater didn’t respond to our requests for comment.)

Who regulates these fertilizer plants?

At least seven different state and federal agencies can regulate Texas fertilizer plants like the one in West: OSHA, the Environmental Protection Agency, the Department of Homeland Security, the U.S. Pipeline and Hazardous Materials Safety Administration, the Texas Department of State Health Services, the Texas Commission on Environmental Quality and the Texas Feed and Fertilizer Control Service.

Some of the agencies don’t appear to have shared information before the blast.

Fertilizer plants that hold more than 400 pounds of ammonium nitrate, for instance, are required to notify the Department of Homeland Security. (Ammonium nitrate can be used to make bombs. It’s what Timothy McVeigh used to blow up the Alfred P. Murrah Federal Building in Oklahoma City in 1995.) The West plant held 270 tons — yes, tons — of the chemical last year, according to a report it filed with the Texas Department of State Health Services, but the plant didn’t tell Homeland Security.

Carrie Williams, a Department of State Health Services spokeswoman, told ProPublica that the agency isn’t required to pass that information — which is also sent to local authorities — on to Homeland Security.

While the exact cause of the explosion is unknown, a federal official told the New York Times that investigators believed it was caused by the ammonium nitrate. The blast crater is in the area of the plant where the chemical was stored.

The plant also filed a “worst-case release scenario” report with the EPA and local officials stating there was no risk of a fire or an explosion. The scenario described an anhydrous ammonia leak that wouldn’t hurt anyone.

Did any of these agencies fail to inspect the plant when they should have?

It’s unclear. OSHA conducted the last full safety inspection of the plant in 1985. “Since then,” the Huffington Post reported, “regulators from other agencies have been inside the plant, but they looked only at certain aspects of plant operations, such as whether the facility was abiding by labeling rules when packaging its fertilizer for sale.”

You can view the full OSHA report here. Since 2011, OSHA has carried out inspections based in part on the level of risk that plants like the one in West reported to the EPA. Since the West plant had told the EPA there was no risk of a fire or an explosion, it wasn’t a priority. The plant also may have been exempt from some inspections as a small employer. An OSHA spokesman told ProPublica that the agency would be investigating whether the plant had such an exemption.

As the Huffington Post also noted, the most recent federal safety inspection of the plant, in 2011, resulted in a $5,250 fine for failing to draft a safety plan for pressured canisters of anhydrous ammonia, among other infractions. (There’s no evidence that anhydrous ammonia played any role in the explosion.)

Why was a plant that stored explosive chemicals allowed to be located so close to a school?

The EPA and other federal agencies actually don’t regulate how close such plants can be to schools, nursing homes and population centers. In Texas, the decision is left up to the local zoning authorities.

A Dallas Morning News investigation in 2008 found that Dallas County residents were “at risk of a toxic disaster because outdated and haphazard zoning has allowed homes, apartments and schools to be built within blocks — in some cases even across the street — from sites that use dangerous chemicals.”

Ed Sykora, who owns a Ford dealership in West and spent a dozen years on the school board and the city council, told the Huffington Post he couldn’t recall the town discussing whether it was a good idea to build houses and the school so close to the plant, which has been there since 1962. "The land was available out there that way; they could get sewer and other stuff that way without building a bunch of new lines," Sykora said. "There never was any thought about it. Maybe that was wrong."

OSHA, the EPA and the U.S. Chemical Safety Board are all investigating. But don’t hold your breath waiting for the Chemical Safety Board’s conclusions. The agency is still investigating a blast that killed seven workers at an oil refinery in Washington State three years ago, as well as the Deepwater Horizon oil rig explosion that killed 11 workers in 2010 and sent oil flowing into the Gulf of Mexico for months.

A Center for Public Integrity investigation found that the number of accident reports completed by the Chemical Safety Board had declined dramatically since 2006. Daniel Horowitz, the agency’s managing director, said that the agency was stretched thin and had been asking for more investigators for years.

“Going forward, the owners and employees of Adair Grain and West Fertilizer Co. are working closely with investigating agencies,”Donald Adair, the plant’s owner and a West resident,said in a statement last Friday. “We are presenting all employees for interviews and will assist in the fact finding to whatever degree possible.”

Yes, but it would roll back regulations rather than strengthen them. Eleven representatives — one Democrat and 10 Republicans — sponsored a bill in February that would limit the EPA’s regulatory authority over fertilizer plants. It has been endorsed by industry groups such as the Fertilizer Institute. Kathy Mathers, a spokeswoman for the Fertilizer Institute, told ProPublica that the group supports the bill because it would more clearly spell out how the EPA can regulate the industry.

Contacts and sources:
by Theodoric Meyer,  ProPublica
on April 25, 2013