The Earth’s Core Is 1000 Degrees Hotter Than Previously Thought

Scientists have determined the temperature near the Earth's centre to be 6000 degrees Celsius, 1000 degrees hotter than in a previous experiment run 20 years ago. These measurements confirm geophysical models that the temperature difference between the solid core and the mantle above, must be at least 1500 degrees to explain why the Earth has a magnetic field. The scientists were even able to establish why the earlier experiment had produced a lower temperature figure.

This artist's view depicts the different layers of the Earth and their representative temperatures: crust, upper and lower mantle (brown to red), liquid outer core (orange) and solid inner core (yellow). The pressure at the border between the liquid and the solid core (highlighted) is 3.3 million atmospheres, with a temperature now confirmed as 6000 degrees Celsius. 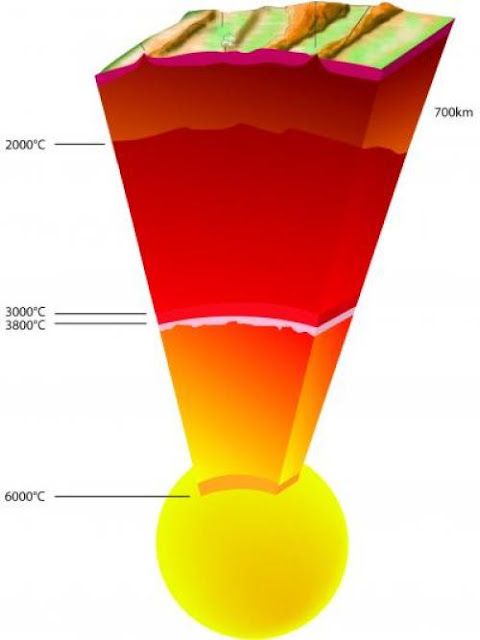 The Earth's core consists mainly of a sphere of liquid iron at temperatures above 4000 degrees and pressures of more than 1.3 million atmospheres. Under these conditions, iron is as liquid as the water in the oceans. It is only at the very centre of the Earth, where pressure and temperature rise even higher, that the liquid iron solidifies. Analysis of earthquake-triggered seismic waves passing through the Earth, tells us the thickness of the solid and liquid cores, and even how the pressure in the Earth increases with depth.

However these waves do not provide information on temperature, which has an important influence on the movement of material within the liquid core and the solid mantle above. Indeed the temperature difference between the mantle and the core is the main driver of large-scale thermal movements, which together with the Earth's rotation, act like a dynamo generating the Earth's magnetic field. The temperature profile through the Earth's interior also underpins geophysical models that explain the creation and intense activity of hot-spot volcanoes like the Hawaiian Islands or La Réunion.

To generate an accurate picture of the temperature profile within the Earth's centre, scientists can look at the melting point of iron at different pressures in the laboratory, using a diamond anvil cell to compress speck-sized samples to pressures of several million atmospheres, and powerful laser beams to heat them to 4000 or even 5000 degrees Celsius."In practice, many experimental challenges have to be met," explains Agnès Dewaele from CEA, "as the iron sample has to be insulated thermally and also must not be allowed to chemically react with its environment. Even if a sample reaches the extreme temperatures and pressures at the centre of the Earth, it will only do so for a matter of seconds. In this short timeframe it is extremely difficult to determine whether it has started to melt or is still solid."

The experimental set-up of the experiment at ESRF beamline ID27 where the diffraction maps were recorded. The diamond anvil cell is inside the brass cylinder in the centre. The image also pictures Guillaume Morard, one of the co-authors of the publication, wearing laser safety goggles.

This is where X-rays come into play. "We have developed a new technique where an intense beam of X-rays from the synchrotron can probe a sample and deduce whether it is solid, liquid or partially molten within as little as a second, using a process known diffraction," says Mohamed Mezouar from the ESRF, "and this is short enough to keep temperature and pressure constant, and at the same time avoid any chemical reactions."

The scientists determined experimentally the melting point of iron up to 4800 degrees Celsius and 2.2 million atmospheres pressure, and then used an extrapolation method to determine that at 3.3 million atmospheres, the pressure at the border between liquid and solid core, the temperature would be 6000 +/- 500 degrees. This extrapolated value could slightly change if iron undergoes an unknown phase transition between the measured and the extrapolated values.

A very thin beam of synchrotron X-rays is used to detect whether solid iron has started to melt. This will change the crystalline structure, in turn modifying the “diffraction pattern” of deflected X-rays behind the sample.

When the scientists scanned across the area of pressures and temperatures, they observed why Reinhard Boehler, then at the MPI for Chemistry in Mainz (Germany), had in 1993 published values about 1000 degrees lower. Starting at 2400 degrees, recrystallization effects appear on the surface of the iron samples, leading to dynamic changes of the solid iron's crystalline structure. The experiment twenty years ago used an optical technique to determine whether the samples were solid or molten, and it is highly probable that the observation of recrystallization at the surface was interpreted as melting.

"We are of course very satisfied that our experiment validated today's best theories on heat transfer from the Earth's core and the generation of the Earth's magnetic field. I am hopeful that in the not-so-distant future, we can reproduce in our laboratories, and investigate with synchrotron X-rays, every state of matter inside the Earth," concludes Agnès Dewaele.

The results are published on 26 April 2013 in Science.

The research team was led by Agnès Dewaele from the French national technological research organization CEA, alongside members of the French National Center for Scientific Research CNRS and the European Synchrotron Radiation Facility ESRF in Grenoble (France).