The Dark Side of Dark Lightning

Until very recently, lightning was thought to be an entirely conventional discharge, involving only low-energy (few eV) electrons. This picture changed completely with the discovery of intense x-ray and gamma-ray emissions from natural cloud-to-ground lightning, rocket-triggered lightning and thunderstorms. Indeed, the gamma-rays generated by thunderstorms are so intense that they are routinely observed by spacecraft a thousand kilometers away in the form of terrestrial gamma-ray flashes (TGFs).

These energetic emissions cannot be produced by conventional discharges in air, and so the presence of x-rays and gamma-rays strongly implies that relativistic runaway electrons, accelerated in air by strong electric fields, play a role in thunderstorm and lightning processes. Furthermore, it has been found that the beams of relativistic electrons produced by thunderstorms can discharge the clouds faster than normal lightning, while generating relatively little visible light. As a result, such dark lightning may compete with normal lightning as a discharge path for thunderstorms.

“What are the radiation doses to airplane passengers from the intense bursts of gamma-rays that originate from thunderclouds?" Florida Institute of Technology Department of Physics and Space Science faculty members addressed the issue and presented their modeling work at a press conference meeting of the European Geosciences Union in Vienna, Austria, April 10. Joseph Dwyer, Ningyu Liu and Hamid Rassoul discussed a new physics-based model of radiation dose calculations and compare the calculations to previous work. 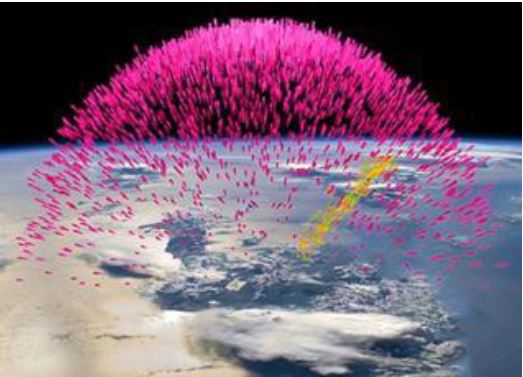 Scientists have known for almost a decade that thunderstorms are capable of generating brief but powerful bursts of gamma-rays called Terrestrial Gamma-Ray Flashes, or TGFs. These flashes of gamma-rays are so bright they can blind instruments many hundreds of kilometers away in outer space. Because they can originate near the same altitudes at which commercial aircraft routinely fly, scientists have been trying to determine whether or not TGFs present a radiation hazard to individuals in aircraft.

Until recently, the work to answer that question was hampered by a poor understanding of exactly how these gamma-rays are generated by thunderstorms, with initial dose estimates ranging from not-so-safe to downright scary. Now, scientists at Florida Tech have developed a promising physics-based model of exactly how thunderstorms manage to produce high-energy radiation.

According to their model, instead of creating normal lightning, thunderstorms can sometimes produce an exotic kind of electrical breakdown that involves high-energy electrons and their anti-matter equivalent called positrons. The interplay between the electrons and positrons causes an explosive growth in the number of these high-energy particles, emitting the observed flash of gamma-rays while rapidly discharging the thundercloud, sometimes even faster than normal lightning. Even though copious gamma-rays are emitted by this process, very little visible light is produced, creating a kind of electrical breakdown within the storms called “dark lightning.”

Recent modeling work of dark lightning shows that it can explain many of the observed properties of TGFs. The model also calculates the radiation doses received by individuals inside aircraft that happen to be in exactly the wrong place at the wrong time. Near the tops of the storms, for the types of gamma-ray flashes that can be seen from space, the radiation doses are equivalent to about 10 chest x-rays, or about the same radiation people would receive from natural background sources over the course of a year.

“However, near the middle of the storms, the radiation dose could be about 10 times larger, comparable to some of the largest doses received during medical procedures and roughly equal to a full-body CT scan,” said Dwyer. “Although airline pilots already do their best to avoid thunderstorms, occasionally aircraft do end up inside electrified storms. On rare occasions, according to the model calculation, it may be possible that hundreds of people, without knowing it, may be simultaneously receiving a sizable dose of radiation from dark lightning.”

It is not known yet how often, if ever, this actually occurs, but ongoing research is working to address this issue. The good news is that the doses never seem to reach the truly dangerous levels that the initial estimates suggested.

This fundamental research is funded in part by the Defense Advanced Research Projects Agency's NIMBUS program. The views expressed are those of the author and do not reflect the official policy or position of the Department of Defense or the U.S. Government.