This artist's impression shows the "starburst" galaxy HFLS3. The galaxy appears as little more than a faint, red smudge in images from the Herschel space observatory. But appearances can be deceiving for it is making stars more than 2,000 times faster than our own Milky Way galaxy, one of the highest star-formation rates ever seen in any galaxy. Astronomers, including Matt Bradford, Jamie Bock, Darren Dowell, Hien Nguyen and Jonas Zmuidzinas of NASA's Jet Propulsion Laboratory, Pasadena, Calif., have discovered a dust-filled, massive galaxy churning out stars when the cosmos was a mere 880 million years old. This is the earliest starburst galaxy ever observed.

The discovery, appearing in the April 18 issue of Nature, was made using the European Space Agency's Herschel space observatory, for which JPL helped build two instruments.

The galaxy HFLS3 was found initially as a small red dot in Herschel submillimetre images (main image, and panels on right). Subsequent observations with ground-based telescopes, ranging from optical to millimetre-wave (insets) showed that there are two galaxies appearing very close together. They are at very different distances, however, with one of them, seen in millimetre-wave (inset, blue) being so distant that we are seeing it as it was when the Universe was just 880 million years old. HFLS3 is a 'maximum starburst' galaxy, the most distant of its type ever found. The first galaxies were small, then eventually merged together to form the behemoths we see in the present universe. Those smaller galaxies produced stars at a modest rate, and only later --when the universe was a couple of billion years old -- did the vast majority of larger galaxies begin to form and accumulate enough gas and dust to become prolific star factories. Indeed, astronomers have observed that these star factories, called starburst galaxies, became prevalent a couple of billion years after the big bang.

The newfound galaxy, called HFLS3, seems to defy this model, prodigiously producing stars when our universe was in its infancy. HFLS3 is about as massive as our Milky Way galaxy but produces stars at a rate 2,000 times greater. These stars are forming from interstellar gas remarkably rich in molecules such as carbon monoxide, ammonia and water.

Generating the mass equivalent of 2,900 suns per year, the galaxy is making stars at a rate as high as any galaxy in the universe, prompting the team to call it a "maximum-starburst" galaxy.

While the discovery of this single galaxy isn't enough to overturn current theories of galaxy formation, finding more galaxies like this one could challenge them, the astronomers say.

"This galaxy is just one spectacular example, but it's telling us that extremely vigorous star formation is possible early in the universe," said Bock, who is also a professor of physics at the California Institute of Technology in Pasadena and a coauthor of the paper.
Looking back on the Universe’s history for a specific patch of the sky observed by Herschel and Keck to reveal many previously unseen starburst galaxies. This graphic shows a representation of the distribution of nearly 300 galaxies in one 1.4 x 1.4 degree field of view. In total, Keck identified 767 galaxies found by Herschel.

The galaxies were first detected by ESA’s Herschel space observatory and an example of one of the far-infrared fields of view is shown in the graphic. The redshifts were determined by the ground-based W.M. Keck telescopes. 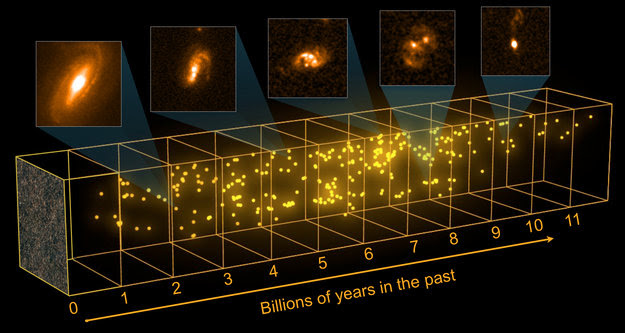