Astronomy & Astrophysics is publishing Herschel observations of water in Jupiter’s stratosphere. It is a clear remnant of the Shoemaker-Levy 9 impact on Jupiter nearly twenty years ago.

In July 1994, the comet Shoemaker-Levy 9 (SL9) hit Jupiter and left visible scars on the Jovian disk for weeks. This spectacular event was the first direct observation of an extraterrestrial collision in the solar system, and it was followed worldwide by professional and amateur astronomers.

Astronomers have finally found direct proof that almost all water present in Jupiter's stratosphere, an intermediate atmospheric layer, was delivered by comet Shoemaker-Levy 9, which famously struck the planet in 1994.

The findings, based on new data from the Herschel space observatory, reveal more water in Jupiter's southern hemisphere, where the impacts occurred, than in the north. Herschel is a European Space Agency mission with important NASA participation.

The origin of water in the upper atmospheres of the solar system's giant planets has been debated for almost two decades. Astronomers were quite surprised at the discovery of water in the stratospheres of Jupiter, Saturn, Uranus and Neptune, which dates to observations performed with ESA's Infrared Space Observatory in 1997.

While the source of water in the lower layers of their atmospheres can be explained as internal, the presence of this molecule in their upper atmospheric layers is puzzling due to the scarcity of oxygen there. Its supply must have an external origin. Since then, astronomers have investigated several possible candidates that may have delivered water to these planets, from icy rings and satellites to interplanetary dust particles and cometary impacts.

This map shows the distribution of water in the stratosphere of Jupiter as measured with the Herschel space observatory. 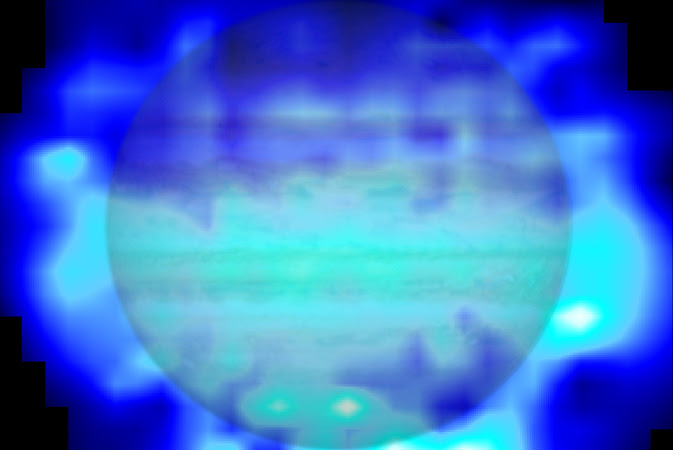 Image credit: Water map: ESA/Herschel/T. Cavalié et al.; Jupiter image: NASA/ESA/Reta Beebe (New Mexico State University)
SL9 was discovered orbiting Jupiter by astronomers David Levy and Carolyn and Eugene M. Shoemaker on March 24, 1993. It was the first comet observed orbiting a planet rather than the Sun. SL9 was found to be composed of 21 fragments. Soon after that, orbital studies showed that the comet had passed within Jupiter’s Roche limit in July 1992. Inside this limit, the planet’s tidal forces are strong enough to disintegrate a body held together by its own gravity, thus explaining SL9’s fragmentation. Even more interestingly, the studies showed that SL9’s orbit would pass within Jupiter in July 1994 and that the comet would then collide with the planet, with impacts in the southern hemisphere near 44°S latitude. 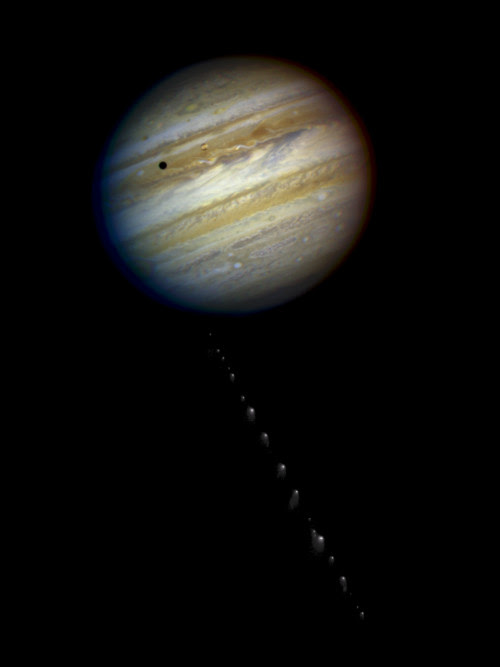 The SL9 impact and its subsequent scars on Jupiter were observed for weeks, but its chemical impact on Jupiter's atmosphere lasted even longer. Emission from water vapor was observed during the fireball phase of the SL9 impacts, but from that observation, it was difficult to assess how this would modify Jupiter's composition on the long term. In 1997, the ESA Infrared Space Observatory (ISO) detected water vapor in the stratosphere of Jupiter. At that time, astronomers suspected that it might be a consequence of the SL9 impact because comets are known to be water-rich bodies. However, there were other possible sources of water: interplanetary dust particles produced by cometary activity and asteroid collisions, icy rings, or one of the 60 Jovian satellites.


Fig. 2. Hubble view of the impact sites, a few days after the impacts. 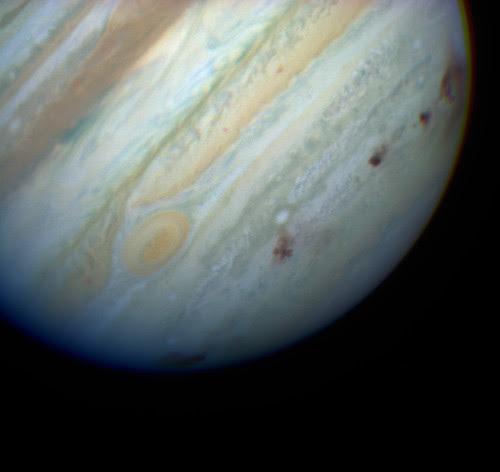 Nearly twenty years after this major impact, astronomers are still observing its consequences on Jupiter. T. Cavalié and his colleagues [1] observed Jupiter with the ESA Herschel Space Observatory, which is sensitive enough to map the abundance of water vs. latitude and altitude in the Jovian stratosphere. These observations, which have now been published inAstronomy & Astrophysics, show a clear north-south asymmetry in the distribution of water, with more water in the south. They indicate that 95% of the water currently observed on Jupiter comes from the comet.

The north-south asymmetry is clearly observed. The green and red areas correspond to the highest abundances.