How Birds Use Earth's Magnetic Field To Guide Migrations

Every year millions of birds make heroic journeys guided by the earth’s magnetic field. How they detect magnetic fields has puzzled scientists for decades. Today, the Keays lab at the Research Institute of Molecular Pathology in Vienna has added some important pieces to this puzzle.

Diagram of a hair cell, which detects sound and gravity. The balls of iron discovered by the Keays group are shown in blue. These iron balls are found directly beneat the “hairs”, and may play a role in magnetic detection. 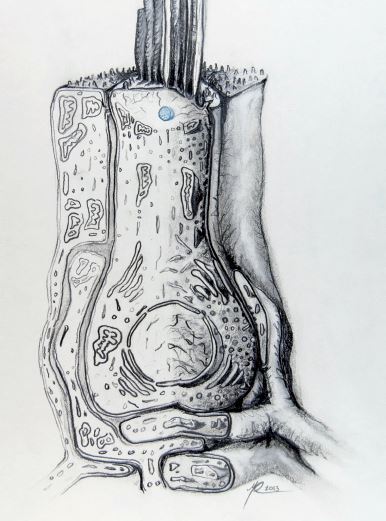 Their work, published in Current Biology, reports the discovery of iron balls in sensory neurons. These cells, called hair cells, are found in the ear and are responsible for detecting sound and gravity. Remarkably, each cell has just one iron ball, and it is in the same place in every cell. “It’s very exciting. We find these iron balls in every bird, whether it’s a pigeon or an ostrich” adds Mattias Lauwers who discovered them “but not in humans”. It is an astonishing finding, despite decades of research these conspicuous balls of iron had not been discovered.

This finding builds on previous work by the lab of David Keays who last year showed that iron-rich cells in the beak of pigeons that were believed to be the magnetic sensors, were really just blood cells. “These cells are much better candidates, because they’re definitely neurons. But we’re a long way off to understanding how magnetic sensing works – we still don’t know what these mysterious iron balls are doing.” said Dr Keays. “Who knows, perhaps they are the elusive magnetoreceptors” muses Dr Keays “only time will tell”.

The paper "An Iron-Rich Organelle in the Cuticular Plate of Avian Hair Cells" (Lauwers et al.) is published online by Current Biology on April 25, 2013.
on April 26, 2013