Blazar PKS 1424+240 is the most distant known source of very high-energy gamma rays, but emission spectrum deviates from expectations.

This is an artist's concept of the Hubble Space Telescope viewing ultraviolet light from the jet of the active galactic nucleus of PKS 1424+240. Clouds of hydrogen gas along the line of sight absorb the light at known frequencies, allowing the redshift and distance of each cloud to be determined. The most distant gas cloud determines the minimum distance to PKS 1424+240. Data from the Fermi Gamma-ray Space Telescope, shown on the horizon at the left, were also used for this study. 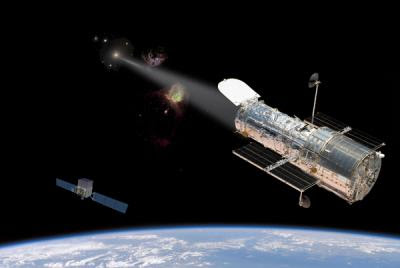 A team led by physicists at the University of California, Santa Cruz, used data from the Hubble Space Telescope to set a lower limit for the blazar's redshift (z ≥ 0.6035), which corresponds to a distance of at least 7.4 billion light-years. Over such a great distance, a substantial proportion of the gamma rays should be absorbed by the extragalactic background light, but calculations that account for the expected absorption yield an unexpected emission spectrum for the blazar.

"We're seeing an extraordinarily bright source which does not display the characteristic emission expected from a very high-energy blazar," said Amy Furniss, a graduate student at the Santa Cruz Institute for Particle Physics (SCIPP) at UCSC and first author of a paper describing the new findings. The paper has been accepted for publication in Astrophysical Journal Letters and is currently posted on arXiv.org.

Coauthor David Williams, adjunct professor of physics at UC Santa Cruz, said the findings may indicate something new about the emission mechanisms of blazars, the extragalactic background light, or the propagation of gamma-ray photons over long distances.

"We're finding very high-energy gamma-ray sources at greater distances than we thought we might, and in doing so we're finding some things we don't entirely understand," Williams said. "Having a source at this distance will allow us to better understand how much background absorption there is and test the cosmological models that predict the extragalactic background light."

The extragalactic background light (EBL) is the diffuse radiation from all stars and galaxies, a dim but pervasive glow that fills the universe. When a high-energy gamma-ray photon collides with a lower-energy EBL photon, they annihilate and create an electron-positron pair. The farther gamma rays have to travel the more likely they are to be absorbed by this mechanism. This limits the distance to which sources of very high-energy gamma rays can be detected.

Measuring the EBL is extremely difficult because there are so many bright sources of light in our immediate neighborhood. In addition to estimates based on cosmological models, astronomers have used galaxy counts to set a lower limit for the EBL. Using a model close to this lower limit to calculate the expected absorption of very high-energy gamma rays from PKS 1424+240, Furniss derived an intrinsic gamma-ray emission spectrum for the blazar. The results, however, deviate from the expected emission based on current blazar models.

Blazar emission is thought to result from a relativistic jet of particles powered by matter falling onto a supermassive black hole at the center of the host galaxy. "There may be something going on in the emission mechanisms of the blazar that we don't understand," Williams said. "There are more exotic explanations as well, but it may be premature to speculate at this point."

Gamma rays from PKS 1424+240 were first detected by the Fermi Gamma-ray Space Telescopeand subsequently by the ground-based instrument VERITAS (Very Energetic Radiation Imaging Telescope Array System), which is sensitive to gamma-rays in the very high-energy (VHE) band from about 100 GeV to more than 10 TeV. To determine the redshift of the blazar--a measure of how much the light from an object has been stretched to longer wavelengths by the expansion of the universe--the researchers used data obtained by the Hubble Space Telescope's Cosmic Origins Spectrograph for another research program.


Unprecedented flares from the blazar 3C 454.3 in the constellation Pegasus now make it the brightest persistent gamma-ray source in the sky. That title usually goes to the Vela pulsar in our galaxy, which is millions of times closer. These all-sky images, which show the numbers of high-energy gamma-rays captured by Fermi's Large Area Telescope on December 3 and November 18, clearly show the change. Shown as an example of a blazar flare. 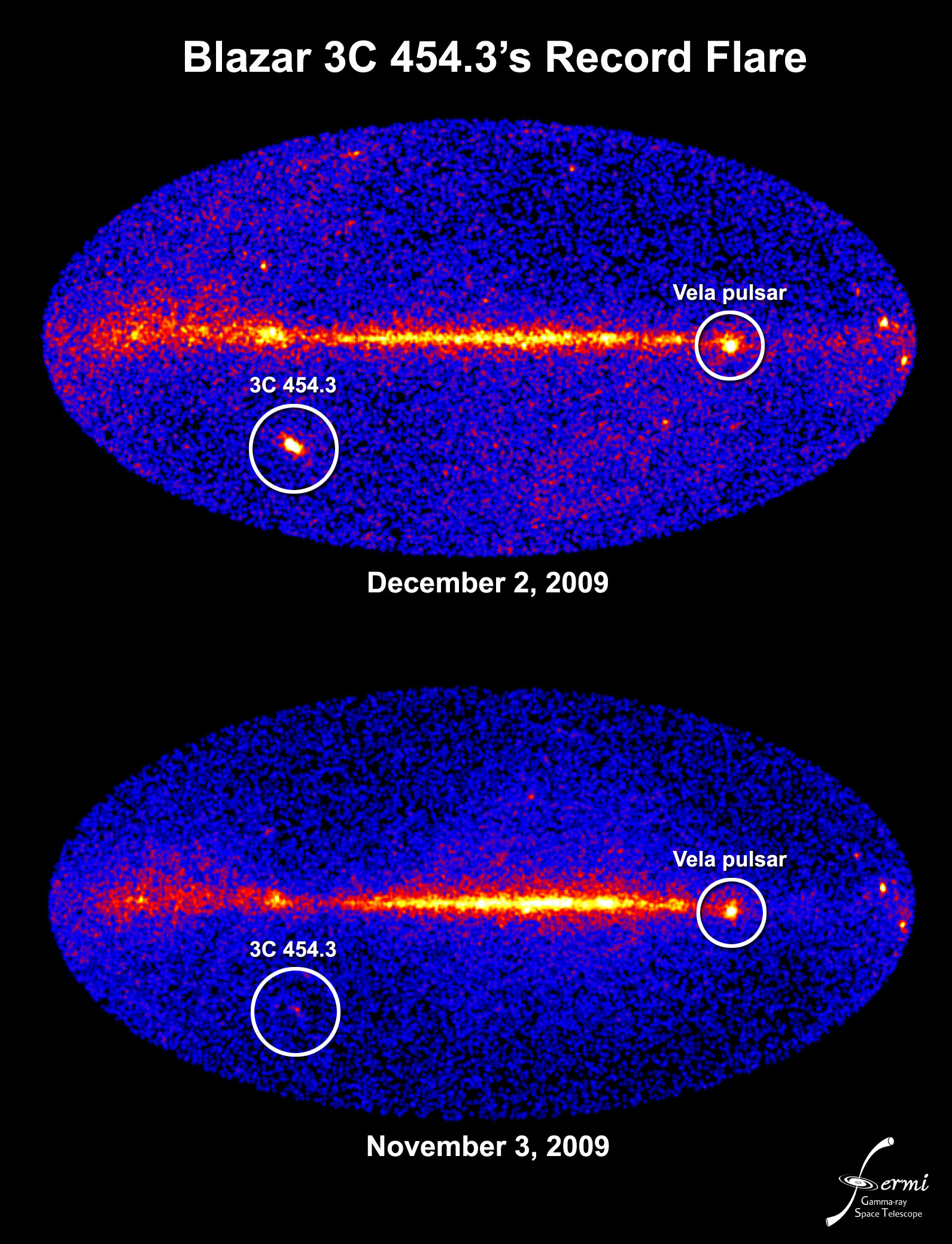 In addition to Furniss and Williams, the coauthors of the paper include J. Xavier Prochaska, professor of astronomy and astrophysics at UCSC; Joel Primack, professor of physics at UCSC; Michele Fumagalli, a former UCSC graduate student now at Carnegie Observatories and Princeton University; Charles Danforth and John Stocke at the University of Colorado; Meg Urry at Yale University; Alex Filippenko at UC Berkeley; and William Neely at the NF/ Observatory.