This movie from the Solar Terrestrial Relations Observatory (STEREO) shows comet PanSTARRS as it moved around the sun from March 10-15,2013 (repeated three times). 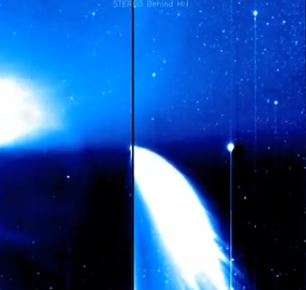 The images were captured by the Heliospheric Imager (HI), an instrument that looks to the side of the sun to watch coronal mass ejections (CMEs) as they travel toward Earth, which is the unmoving bright orb on the right.

The bright light on the left comes from the sun and the bursts from the left represent the solar material erupting off the sun in a CME. While it appears from STEREO’s point of view that the CME passes right by the comet, the two are not lying in the same plane, which scientists know since the comet’s tail didn’t move or change in response to the CME’s passage.