This composite of supernova remnant G306.3–0.9 merges Chandra X-ray observations (blue), infrared data acquired by the Spitzer Space Telescope (red and cyan) and radio observations (purple) from the Australia Telescope Compact Array. The image is 20 arcminutes across, which corresponds to 150 light-years at the remnant's estimated distance. 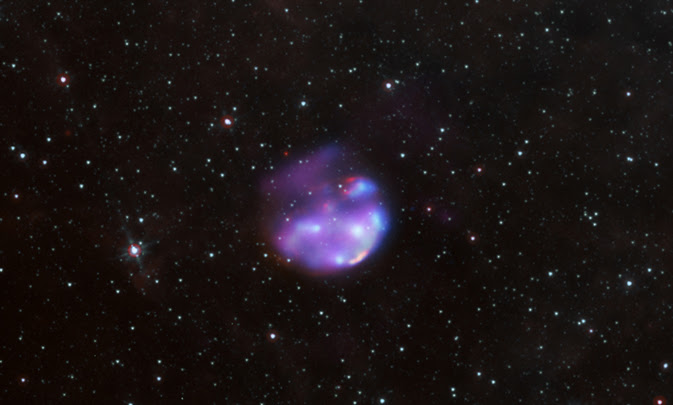 While performing an extensive X-ray survey of our galaxy's central regions, NASA's Swift satellite has uncovered the previously unknown remains of a shattered star. Designated G306.3–0.9 after the coordinates of its sky position, the new object ranks among the youngest-known supernova remnants in our Milky Way galaxy.

"Astronomers have previously cataloged more than 300 supernova remnants in the galaxy," said lead scientist Mark Reynolds, a postdoctoral researcher at the University of Michigan in Ann Arbor. "Our analysis indicates that G306.3–0.9 is likely less than 2,500 years old, making it one of the 20 youngest remnants identified."

Astronomers estimate that a supernova explosion occurs once or twice a century in the Milky Way. The expanding blast wave and hot stellar debris slowly dissipate over hundreds of thousands of years, eventually mixing with and becoming indistinguishable from interstellar gas.


A wider view places G306.3–0.9 in context with star-formation regions in southern Centaurus. Chandra X-ray observations (blue), Spitzer infrared data (red, cyan), and radio observations (purple) from the Australia Telescope Compact Array are merged in this composite. The image is one degree across, which corresponds to 450 light-years at the remnant's estimated distance. 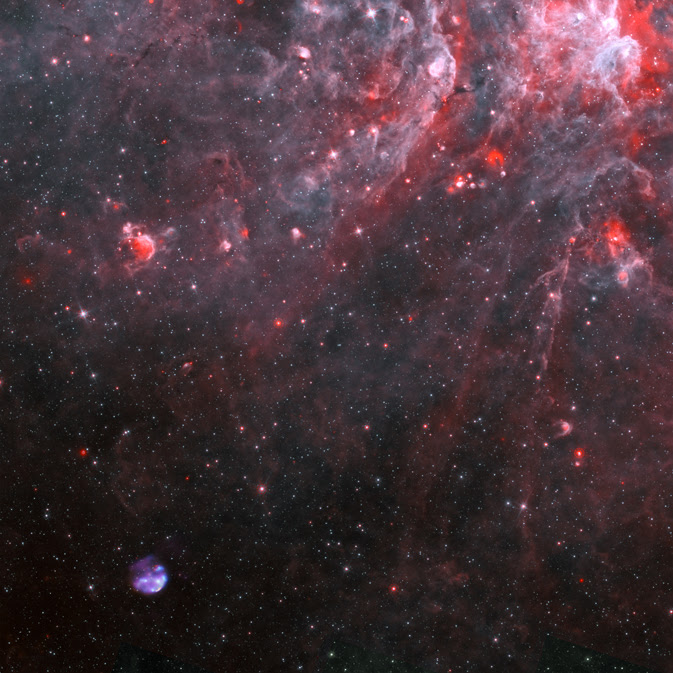 Like fresh evidence at a crime scene, young supernova remnants give astronomers the best opportunity for understanding the nature of the original star and the details of its demise.

Supernova remnants emit energy across the electromagnetic spectrum, from radio to gamma rays, and important clues can be found in each energy band. X-ray observations figure prominently in revealing the motion of the expanding debris, its chemical content, and its interaction with the interstellar environment, but supernova remnants fade out in X-ray light after 10,000 years. Indeed, only half of those known in the Milky Way galaxy have been detected in X-rays at all.

Reynolds leads the Swift Galactic Plane Survey, a project to image a two-degree-wide strip along the Milky Way’s central plane at X-ray and ultraviolet energies at the same time. Imaging began in 2011 and is expected to complete this summer.

"The Swift survey leverages infrared imaging previously compiled by NASA’s Spitzer Space Telescope and extends it into higher energies," said team member Michael Siegel, a research associate at the Swift Mission Operations Center (MOC) in State College, Pa., which is operated by Penn State University. "The infrared and X-ray surveys complement each other because light at these energies penetrates dust clouds in the galactic plane, while the ultraviolet is largely extinguished."

This image from Swift’s X-ray Telescope was taken on Feb. 22, 2011, as part of the Galactic Plane Survey. The dots in the image indicate where X-rays struck the detector. Despite this short 8.5-minute exposure, the extended circular patch of G306.3–0.9 stands out. The image is 25.5 arcminutes across. 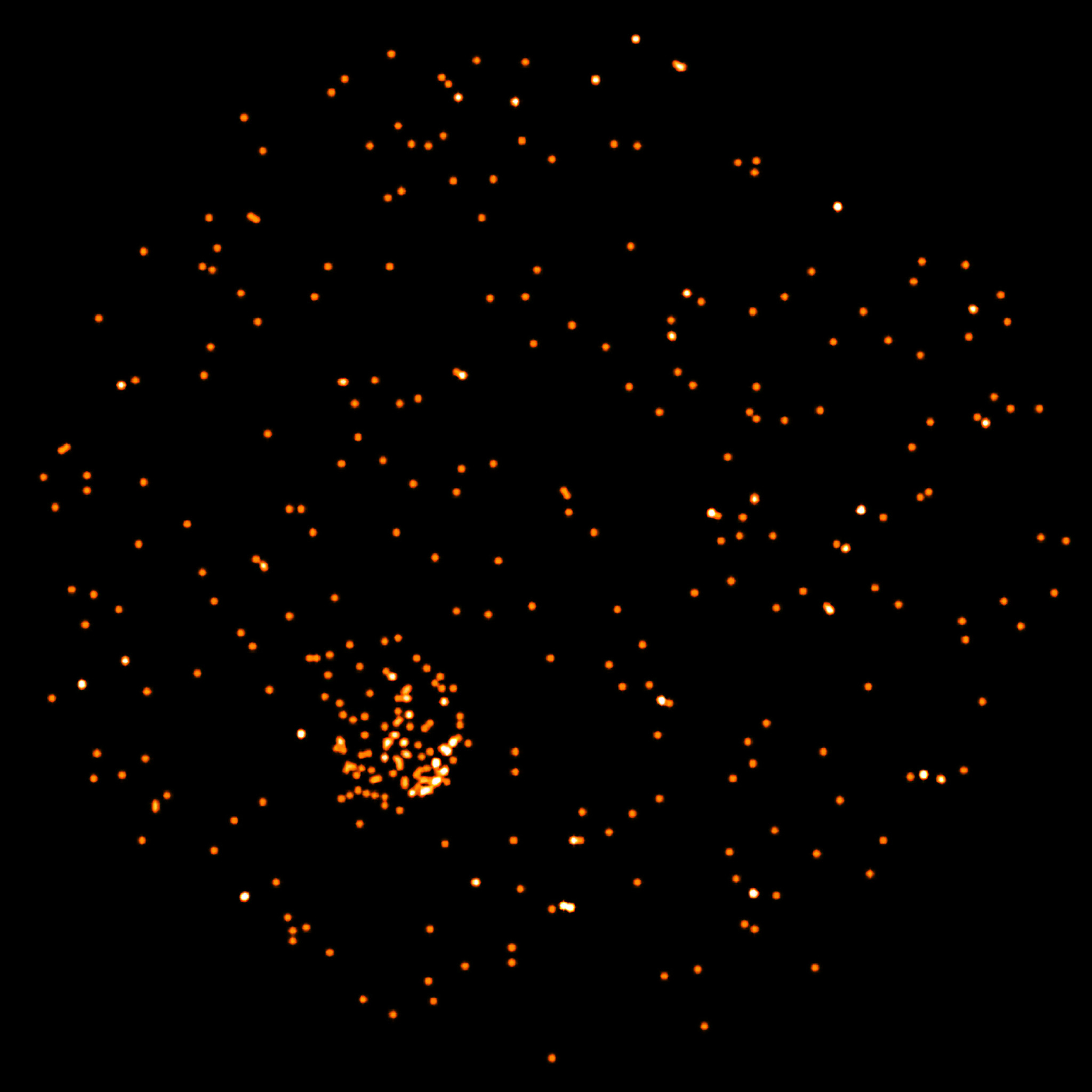 On Feb. 22, 2011, Swift imaged a survey field near the southern border of the constellation Centaurus. Although nothing unusual appeared in the ultraviolet exposure, the X-ray image revealed an extended, semi-circular source reminiscent of a supernova remnant. A search of archival data revealed counterparts in Spitzer infrared imagery and in radio data from the Molonglo Observatory Synthesis Telescope in Australia.

To further investigate the object, the team followed up with an 83-minute exposure using NASA’s Chandra X-ray Observatory and additional radio observations from the Australia Telescope Compact Array (ATCA), located near the town of Narrabri in New South Wales.

"The fantastic sensitivity of ATCA has enabled us to image what, at radio wavelengths, turns out to be the dimmest remnant we have ever seen in our galaxy," said team member Cleo Loi, an undergraduate student at the University of Sydney who led the analysis of the radio observations.

A paper describing the team’s findings will appear in an upcoming edition of The Astrophysical Journal and was published online on Friday.

Using an estimated distance of 26,000 light-years for G306.3–0.9, the scientists determined that the explosion’s shock wave is racing through space at about 1.5 million mph (2.4 million km/h). The Chandra observations reveal the presence of iron, neon, silicon and sulfur at temperatures exceeding 50 million degrees F (28 million C), a reminder not only of the energies involved but of the role supernovae play in seeding the galaxy with heavy elements produced in the hearts of massive stars.

"We don’t yet have enough information to determine what type of supernova this was and therefore what type of star exploded, but we’ve planned a further Chandra observation to improve the picture,” said coauthor Jamie Kennea, also a researcher at the Swift MOC. "We see no compelling evidence that the explosion formed a neutron star, and this is something we hope can be determined one way or the other by future work."