Landslides occur in many different geological and environmental settings across Europe. Population growth and expansion into landslide-prone areas has raised landslide risk, while extreme rainfall events in the future - due to climate change - will also have an impact. 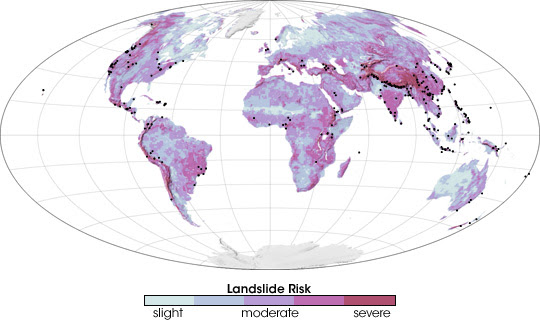 Up until now, experts have used maps marked with danger areas to determine the probability of a specific slope succumbing to a landslide. But these maps only cover a specific point in time, and do not take current weather conditions into account. Of these atmospheric factors, heavy rain is the most dangerous.

We have seen on a number of occasions that landslides can seriously injure or even kill people. This is why a new innovative early warning system called ELDEWAS is being developed, to which will use geological data in tandem with the latest weather forecasts to provide a concrete warning in emergency situations.

The 'Early Landslide Detection and Warning System' (ELDEWAS) is being developed by research scientists at the Fraunhofer Institute of Optronics, System Technologies and Image Exploitation IOSB in Karlsruhe. This system makes use of regularly updated weather conditions and forecasts, coupling these to regional information on elevation profiles, slopes and land use. This allows it to issue an early warning in case of danger. The ELDEWAS system goes hand in hand with INCA-CE, a project co-financed by the EU in which researchers are working on improving short-term weather forecasting, or 'nowcasting', according to Dr. Oliver Krol of Fraunhofer IOSB. While standard meteorological data is for the most part only updated once an hour, with a spatial resolution of ten kilometres, the experts working on the INCA-CE project are able to provide weather forecasts at 15-minute intervals with a spatial resolution of one kilometre.

The landslide at Surte in Sweden, 1950. It was a quick clay slide killing one person. 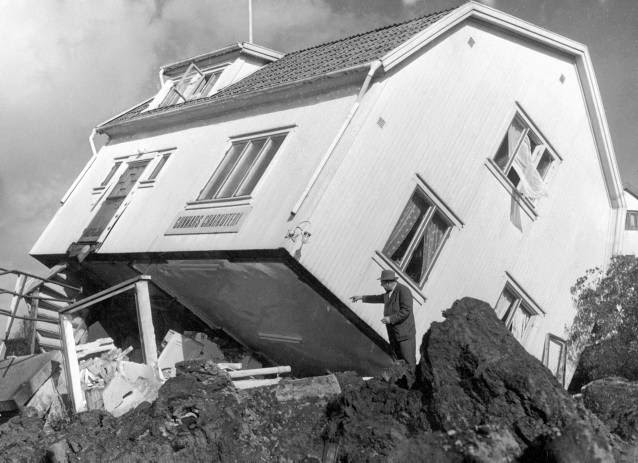 The early landslide warning system is initially being developed by researchers for use in the state of Burgenland in Austria, with the regional safety centre providing all the necessary data. Which slope is this and how steep is it? What type of ground are we dealing with - sand, clay or rock? How is the land used? Where are the installations, houses or roads? Where is wooded and where is open land? Researchers then combine these parameters, looking at which of these stay stable over the long term, and then combine them with weather data, what is constantly in flux. The weather data is provided online by Austrian meteorological service ZAMG, which is also taking part in the INCA-CE project.

The INCA-CE project is implemented through the Central Europe Programme co-financed by the ERDF. Its main focus lies on the further development and distribution of the software INCA developed by the Austrian Central Institute for Meteorology and Geodynamics (ZAMG). Initial practical testing is planned for the spring, when current weather information will be incorporated into the early warning system for the first time. A prototype will be developed and will be available later during the year.

"The software will of course also then be available for use in other countries and regions," says Krol. He also explains the aim behind the research, describing how the system will constantly assess the situation in the background until it perceives a danger, at which point it will independently issue a warning comprising the relevant coordinates and the contact details of the person with responsibility for the area concerned. This contact person is then to be automatically warned of the impending incident via text message, giving them time to take appropriate action, evacuating the populace or locking down the area concerned.

However, researchers still have a few challenges to overcome before this vision can be realised, including how to integrate the online weather data into the system and how to analyse the data received. "There's no doubt that the bulk of the work lies in answering the question of when a situation can be said to become critical. Given that setting rigid threshold values only allows for a binary yes or no answer, offering protection only against the worst case scenario, we have opted to model the problem using fuzzy logic," explains Krol. "This means qualifying the threshold values of the various contributory factors, allowing us to link the variables. In this way, we can get as realistic as possible an assessment of the risk posed."

Imagine a deluge of rain pelting down on water-logged ground. Rivers burst their banks as local residents haul up sandbags to protect themselves from the rising waters. In hilly areas, anxious people await, knowing that waterlogged earth can easily slip, burying cars and houses beneath it. All of these disasters could be prevented in time thanks to this innovation, helping to reduce damage and save lives.
Contacts and sources:\
Fraunhofer Institute of Optronics, System Technologies and Image Exploitation IOSB
on March 18, 2013