Scientists examining evidence across the world from New Jersey to North Africa say they have linked the abrupt disappearance of half of earth's species 200 million years ago to a precisely dated set of gigantic volcanic eruptions. The eruptions may have caused climate changes so sudden that many creatures were unable to adapt—possibly on a pace similar to that of human-influenced climate warming today. The extinction opened the way for dinosaurs to evolve and dominate the planet for the next 135 million years, before they, too, were wiped out in a later planetary cataclysm

In recent years, many scientists have suggested that the so-called End-Triassic Extinction and at least four other known past die-offs were caused at least in part by mega-volcanism and resulting climate change. However, they were unable to tie deposits left by eruptions to biological crashes closely in time. This study provides the tightest link yet, with a newly precise date for the ETE--201,564,000 years ago, exactly the same time as a massive outpouring of lava. "This may not quench all the questions about the exact mechanism of the extinction itself. However, the coincidence in time with the volcanism is pretty much ironclad," said coauthor Paul Olsen, a geologist at Columbia University's Lamont-Doherty Earth Observatory who has been investigating the boundary since the 1970s.

Wave-washed sea cliffs along the coasts of western England and Wales are home to spectacular assemblages of rocks and fossils that may hold keys to understanding a sudden global extinction 201.4 million years ago that cleared the way for the rapid evolution of dinosaurs.At low tide, you can walk along a shore of solid rock and inspect sedimentary rocks lain down over eons, documenting a time when this spot lay at the bottom of a shallow sea, just before the dinosaurs’ rise some 200 million years ago. The layers can be read like pages in a book; geologists have been coming here to study them since the 19th century, but Olsen and Kent think modern analysis techniques may reveal more. 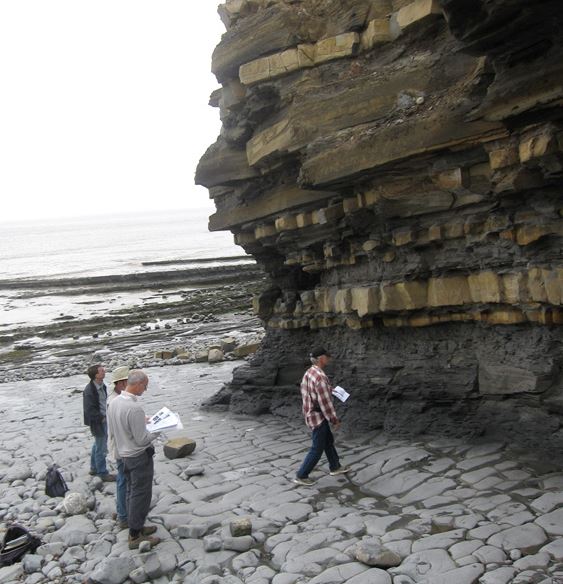 The new study unites several pre-existing lines of evidence by aligning them with new techniques for dating rocks. Lead author Terrence Blackburn (then at Massachusetts Institute of Technology; now at the Carnegie Institution) used the decay of uranium isotopes to pull exact dates from basalt, a rock left by eruptions. The basalts analyzed in the study all came from the Central Atlantic Magmatic Province (CAMP), a series of huge eruptions known to have started around 200 million years ago, when nearly all land was massed into one huge continent.

The eruptions spewed some 2.5 million cubic miles of lava in four sudden spurts over a 600,000-year span, and initiated a rift that evolved into the Atlantic Ocean; remnants of CAMP lavas are found now in North and South America, and North Africa. The scientists analyzed samples from what are now Nova Scotia, Morocco and the New York City suburbs. (Olsen hammered one from a road cut in the Hudson River Palisades, about 1,900 feet from the New Jersey side of the George Washington Bridge.)

Previous studies have suggested a link between the CAMP eruptions and the extinction, but other researchers' dating of the basalts had a margin of error of 1 to 3 million years. The new margin of error is only a few thousand years—in geology, an eye blink. Blackburn and his colleagues showed that the eruption in Morocco was the earliest, with ones in Nova Scotia and New Jersey coming about 3,000 and 13,000 years later, respectively. Sediments below that time contain pollen, spores and other fossils characteristic of the Triassic era; in those above, the fossils disappear.

One hour from New York City, where the suburbs of New Jersey give way to farms, a team of scientists are drilling for ancient rocks on the edge of a cornfield. The rocks hold clues about what the earth was like about 201 million years ago,during the great extinction that allowed dinosaurs to dominate. Listen to paleontologist Paul Olsen describe his drilling operation in Stockton, N.J. while colleagues Morgan Schaller, a geochemist at Rutgers University and Dennis Kent, a paleomagnetics expert at Lamont-Doherty Earth Observatory, operate the drill.

Among the creatures that vanished were eel-like fish called conodonts, early crocodilians, tree lizards and many broad-leaved plants. The dating is further strengthened by a layer of sediment just preceding the extinction containing mineral grains providing evidence of one of earth's many periodic reversals of magnetic polarity. This particular reversal, labeled E23r, is consistently located just below the boundary, making it a convenient marker, said coauthor Dennis Kent, a paleomagnetism expert who is also at Lamont-Doherty. With the same layers found everywhere the researchers have looked so far, the eruptions "had to be a hell of an event," said Kent.

In Clifton, New Jersey, a massive basalt flow (black rock on left) from the time of the End Triassic is exposed in a former quarry, now located behind a retirement home. Reddish sedimentary rocks signaling the extinction itself lie to the far right.

The third piece of chronological evidence is the sedimentary layers themselves. Sedimentary rocks cannot be dated directly—one reason why the timing of the extinction has been hard to nail. Olsen and some others have long contended that the earth's precession—a cyclic change in the orientation of the axis toward the sun and resulting temperature changes—consistently created layers reflecting the alternate filling and drying of large lake basins on a fairly steady 20,000-year schedule. This idea is well accepted for more recent time, but many scientists have had doubts about whether it could be applied much farther back. By correlating the precisely dated basalts with surrounding sedimentary layers, the new study shows that precession operated pretty much the same way then, allowing dates with a give or take of 20,000 years to be assigned to most sediments holding fossils, said Olsen.

Olsen has painstakingly cataloged the layers around the time of the End Triassic, and the initial phase of the extinction occurs in just one layer—meaning the event took 20,000 years at most. But, he said, "it could have taken much less. This is the level of resolution we have now, but it's the 'less' part that is the more important, and that's what we are working on now."

Many scientists assume that giant eruptions would have sent sulfurous particles into the air that darkened the skies, creating a multi-year winter that would have frozen out many creatures. A previous study by Kent and Rutgers University geochemist Morgan Schaller has also shown that each pulse of volcanism doubled the air's concentration of carbon dioxide—a major component of volcanic gases. Following the cold pulses, the warming effects of this greenhouse gas would have lasted for millennia, wiping out creatures that could not take too much heat. (It was already quite hot to begin with at that time; even pre-eruption CO2 levels were higher than those of today.) Fossils show that heat-sensitive plants especially suffered; there is also evidence that the increased CO2 caused chemical reactions that made the oceans more acidic, causing populations of shell-building creatures to collapse.

As if this were not enough, there is also some evidence that a large meteorite hit the earth at the time of the extinction--but that factor seems far less certain. A much stronger case has been made for the extinction of the dinosaurs by a meteorite some 65 million years ago—an event that opened the way for the evolution and dominance of mammals, including human beings. Volcanism may have been involved in that extinction as well, with the meteorite delivering the final blow.)

The End Triassic was the fourth known global die-off; the extinction of the dinosaurs was the fifth. Today, some scientists have proposed that we are on the cusp of a sixth, manmade, extinction. Explosive human population growth, industrial activity and exploitation of natural resources are rapidly pushing many species off the map. Burning of fossil fuels in particular has had an effect, raising the air's CO2 level more than 40 percent in just 200 years—a pace possibly as fast, or faster, than that of the End Triassic. Resulting temperatures increases now appear to be altering ecosystems; and CO2 entering seawater is causing what could be the fastest ongoing acidification of the oceans for at least the last 300 million years, according to a 2012 study. "In some ways, the End Triassic Extinction is analogous to today," said Blackburn. "It may have operated on a similar time scale. Much insight on the possible future impact of doubling atmospheric CO2 on global temperatures, ocean acidity and life on earth may be gained by studying the geologic record."

Paul Renne, a researcher at the Berkeley Geochronology Center in California, who studies the End Triassic but was not involved in the Science paper, said the study was "part of a growing pattern in which we see that the major ecosystem crises were triggered" by volcanism. He said the new data "make the case stronger than it was. … The pendulum continues to swing in favor of that idea." Of the actual mechanism that killed creatures, he said climate change was the most popular suspect. But, he added, "We still don't have any way yet of knowing exactly how much CO2 was put into the atmosphere at that time, and what it did. If we did, we would then be able to say to people, 'Look folks, this is what we're facing now, and here's what we have to do about it. But we don't know that yet."

Citation:  "Zircon U-Pb geochronology links the end-Triassic extinction with the Central Atlantic Magmatic Province," is available from the authors or from Science