The genome of an extinct Australian frog has been revived and reactivated by a team of scientists using sophisticated cloning technology to implant a "dead" cell nucleus into a fresh egg from another frog species.

A Southern Gastric-brooding Frog, Rheobatrachus silus, giving birth in its mountain rainforest habitat in Queensland. The frog in the foreground is another frog that has also gone extinct in the same area, the Southern Day Frog, Taudactylus diurnus. The crayfish is Euastacus hystricosus, an endangered crustacean. 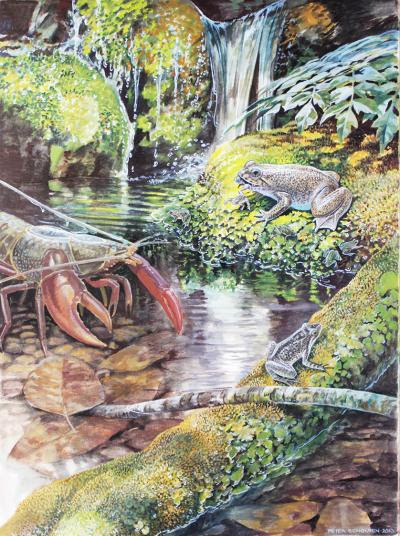 The bizarre gastric-brooding frog, Rheobatrachus silus – which uniquely swallowed its eggs, brooded its young in its stomach and gave birth through its mouth - became extinct in 1983.

But the Lazarus Project team has been able to recover cell nuclei from tissues collected in the 1970s and kept for 40 years in a conventional deep freezer. The "de-extinction" project aims to bring the frog back to life.

In repeated experiments over five years, the researchers used a laboratory technique known as somatic cell nuclear transfer. They took fresh donor eggs from the distantly related Great Barred Frog, Mixophyes fasciolatus, inactivated the egg nuclei and replaced them with dead nuclei from the extinct frog. Some of the eggs spontaneously began to divide and grow to early embryo stage – a tiny ball of many living cells. Although none of the embryos survived beyond a few days, genetic tests confirmed that the dividing cells contain the genetic material from the extinct frog.

A whole frozen gastric-brooding frog after 40 years in a conventional freezer. 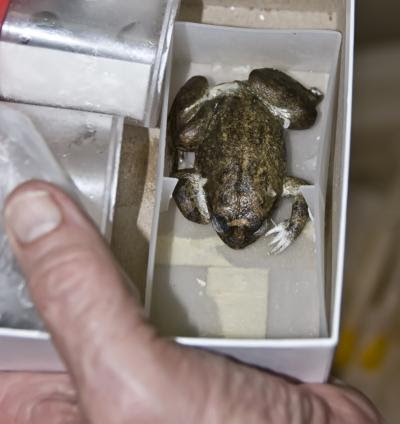 The results are yet to be published.

"We are watching Lazarus arise from the dead, step by exciting step," says the leader of the Lazarus Project team, Professor Mike Archer, of the University of New South Wales, in Sydney. "We've reactivated dead cells into living ones and revived the extinct frog's genome in the process. Now we have fresh cryo-preserved cells of the extinct frog to use in future cloning experiments.

"We're increasingly confident that the hurdles ahead are technological and not biological and that we will succeed. Importantly, we've demonstrated already the great promise this technology has as a conservation tool when hundreds of the world's amphibian species are in catastrophic decline."

The technical work was led by Dr Andrew French and Dr Jitong Guo, formerly of Monash University, in a University of Newcastle laboratory led by frog expert, Professor Michael Mahony, along with Mr Simon Clulow and Dr John Clulow. The frozen specimens were preserved and provided by Professor Mike Tyler, of the University of Adelaide, who extensively studied both species of gastric-brooding frog – R. silus and R. vitellinus - before they vanished in the wild in 1979 and 1985 respectively.

This is a gastric-brooding frog, Rheobatrachus silus, giving oral birth in the lab of Mike Tyler of the University of Adelaide. 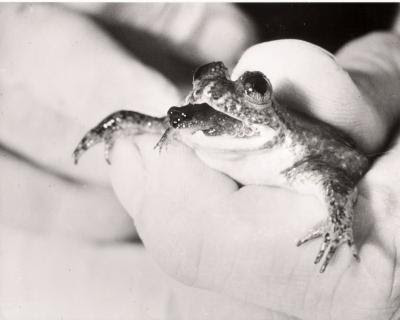 UNSW's Professor Archer spoke publicly for the first time today about the Lazarus Project and also about his ongoing interest in cloning the extinct Australian thylacine, or Tasmanian tiger, at the TEDx DeExtinction event in Washington DC, hosted by Revive and Restore and the National Geographic Society.

Researchers from around the world are gathered there to discuss progress and plans to 'de-extinct' other extinct animals and plants. Possible candidate species include the woolly mammoth, dodo, Cuban red macaw and New Zealand's giant moa.