Distant, dust-filled galaxies were bursting with newborn stars much earlier in cosmic history than previously thought, according to newly published research.

So-called "starburst galaxies" produce stars at the equivalent of a thousand new suns per year. Now, astronomers have found starbursts that were churning out stars when the universe was just a billion years old. 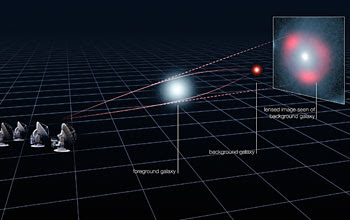 "I find that pretty amazing," said Joaquin Vieira, a postdoctoral scholar at the California Institute of Technology and leader of the study. "These aren't normal galaxies. These galaxies [reveal star formation] at an extraordinary rate, when the universe was very young. I don't think anyone expected us to find galaxies like this so early in the history of the universe."

An international team of astronomers, whose work is reported in the March 14 issue of the journal Nature, found dozens of these galaxies with the National Science Foundation- (NSF) funded South Pole Telescope (SPT).

An ALMA array at daybreak. 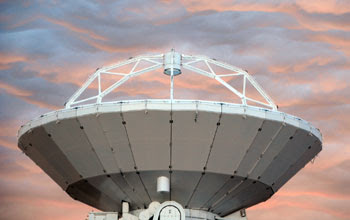 SPT is a 10-meter dish in Antarctica that surveys the sky in millimeter-wavelength light, whose waves fall between radio waves and infrared on the electromagnetic spectrum.

The team then took a more detailed look using the new Atacama Large Millimeter Array (ALMA) in Chile's Atacama Desert, which is funded in part by NSF. ALMA is an international facility and is a partnership between North America, Europe and East Asia in cooperation with the Republic of Chile.

"The new observations represent some of ALMA's most significant scientific results yet," Vieira said. "We couldn't have done this without the combination of SPT and ALMA. ALMA is so sensitive, it is going to change our view of the universe in many different ways."

The "energy of a trillion suns"

Vieira and team's Nature paper is titled: "Dusty starburst galaxies in the early universe as revealed by gravitational lensing." The research enables astronomers to study the earliest bursts of star formation and to understand how galaxies formed and evolved.

Shining in the infrared with the energy of a trillion suns, these newly discovered starburst galaxies represent what the most massive galaxies in our cosmic neighborhood looked like in their star-making youth.

With ALMA, the astronomers found that more than 30 percent of the new galaxies are from a time period just 1.5 billion years after the Big Bang. Previously, only nine such galaxies were known to exist, and it wasn't clear whether galaxies could produce stars at such high rates so early in cosmic history.

Now, with the new discoveries, that number has nearly doubled, providing valuable data that will help other researchers constrain and refine computer models of star and galaxy formation in the early universe.

One of the SPT-discovered sources observed by ALMA and the Hubble Space Telescope (HST). the massive central galaxy (in blue, seen by HST) bends the light from a more distant galaxy that's bright in submillimeter wavelengths, forming a ring-like image of the background galaxy, which is observed by ALMA (red). 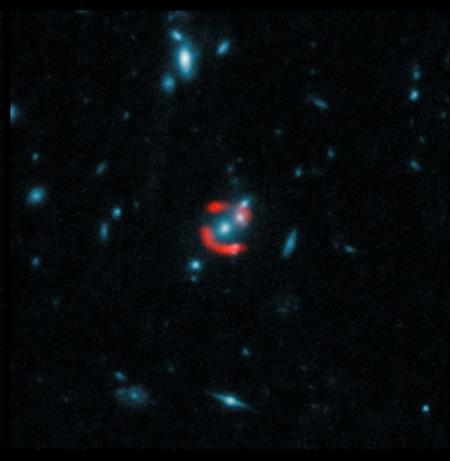 But what's particularly special about the new findings, Vieira says, is that the team determined the distance to these starburst galaxies by directly analyzing the star-forming dust itself. Previously, astronomers had to rely on a cumbersome combination of indirect optical and radio observations using multiple telescopes to study the galaxies.

These measurements were also made possible because of the unique properties of these objects, the astronomers say. The observed galaxies were selected specifically because they are gravitationally lensed--a phenomenon predicted by Einstein in which, like a magnifying glass, a galaxy in the foreground of a viewer on earth bends the light from a more distant background galaxy that is also in the viewer's line of sight.

"A jewel in the crown"

Vladimir Papitashvili, program manager for Antarctic Astrophysics and Geospace Sciences in NSF's Division of Polar Programs, said, "SPT is a jewel in the crown of Antarctic astronomy. Its primary purpose is to study the Cosmic Microwave Background radiation--the faint "echo" of the Big Bang--and the early universe. But the telescope has also made other surprising and scientifically significant discoveries, such as the one described here."

NSF, through its Polar Programs Division, manages the U.S. Antarctic Program, and maintains three year-round stations in Antarctica, including Amundsen-Scott.

One of the SPT-discovered sources observed by Alma and the Hubble Space Telescope (HST). The massive central galaxy (in blue, seen by HST) bends the light from a more distant galaxy that's bright in submillimeter wavelengths, forming a ring-like image of the background galaxy, which is observed by Alma (red). 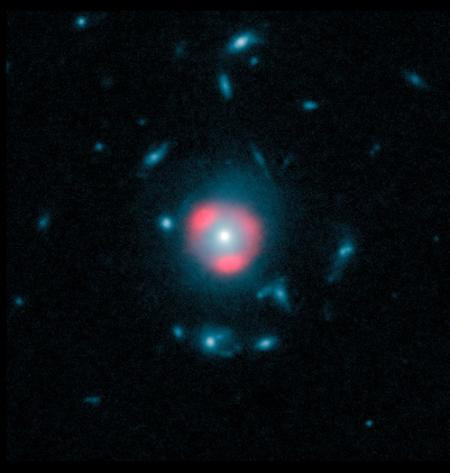 ALMA consists of 45 antennas, each 12 meters in diameter, provided by North America and Europe, with four additional 12-meter and a dozen 7-meter antennas provided by Japan. ALMA is located near San Pedro de Atacama, Chile, at an altitude of 5,000 meters.

ALMA is an international astronomy facility and is a partnership between North America, Europe and Japan in cooperation with the Republic of Chile.

Having come online only last year, ALMA is the largest ground-based astronomy project in history, involving hundreds of astronomers from around the world. The telescope was officially dedicated on March 13, 2013.

In remarks given at the dedication event, NSF Director Subra Suresh noted not only that ALMA represents a wide-ranging international partnership in so-called "big science," but also that "ALMA represents the largest single NSF investment in any facility."

"I am very proud of the scientific advances that ALMA represents, and I am also proud that we will be making the data that emerges from ALMA available to many users around the world, bringing the fruits of scientific discovery to virtually all the world's scientific communities," he added.

Phil Puxley, ALMA Program Manager in NSF's Mathematical and Physical Science (MPS) Directorate, which funds ALMA, noted that the sensitivity of the ALMA array made these studies of the early universe possible.

"The vast improvement in sensitivity [allowed by ALMA] enables observations of galaxies in the distant universe to be made in a matter of minutes, observations which previously would have taken days, or even been impossible, on existing telescopes," he said.

The astronomers used only 16 of the 45 dishes that will eventually come online as part of ALMA, which is the most powerful telescope observing in the millimeter and sub-millimeter wavelengths.

"To me, these results are really exciting because they confirm the expectation that when ALMA is fully available, it can really allow astronomers to probe star formation all the way up to the edge of the observable universe," said Fred Lo, director emeritus and Distinguished Astronomer for the National Radio Astronomy Observatory, the North American partner of ALMA. He is also a Moore Distinguished Scholar at Caltech who was not a part of the study.

These research results arise from only about a quarter of the data taken by Vieira and his colleagues, and they anticipate finding even more of these dusty starburst galaxies.

The ultimate goal for astronomers is to observe galaxies at all wavelengths throughout the history of the universe, piecing together the complete story of how galaxies formed and evolved. So far, astronomers have made much progress in creating computer models and simulations of early galaxy formation, Lo says.

But only with new observational data--such as the information on these new galaxies gathered by SPT and ALMA--will cosmic history ever be truly pieced together.

Computer "simulations are simulations," Lo says. "What really counts is what you see."