What Do Beer, Dogs, And Soy Sauce Have In Common?


What do beer, dogs and cats, and corn all have in common?

All of them are the end products of the process of domestication. Almost everybody knows that a number of different animals and plants have been bred for qualities that benefit humans. But few people realize that a number of microbes have undergone a similar transformation.

Take brewer’s yeast, for example. It is the quintessential ingredient in beer making: genetically altered to convert the sugars in malted barley into alcohol and to produce metabolic byproducts that give beer its unique taste. In fact, dozens of specialized strains of yeast produce the wide variety of beers, lagers and ales that brewers have developed.

“Although people don’t often think about it, we haven’t only domesticated animals and plants, but we have also domesticated dozens of different microbes,” said Assistant Professor of Biological Sciences Antonis Rokas, adding that it’s hard to imagine what life would be like without beer, wine, leavened bread, cheese, yogurt, soy sauce, sauerkraut and a number of other mainstays of the human diet that are produced by domesticated microbes.

“The genetic basis for the domestication of many different plants and animals has been extensively studied, but, remarkably, very little is known about how domestication has shaped the genetic makeup of microbes,” he said.

To begin filling this void, Rokas assembled a team of Vanderbilt researchers led by graduate student John Gibbons to chart a genome-wide profile of the genetic differences between strains of the domesticated fungus Aspergillus oryzae, which is used to make the rice wine sake, soy sauce and miso and its wild relative Aspergillus flavus. The results of their study were published online in the journal Current Biology on July 12.

Aspergillus oryzae, on the left, has been genetically optimized to convert rice starch into sugars. By contrast its wild cousin, Aspergillus flavus, is a major agricultural pest and produces aflatoxin, a potent natural carcinogen. 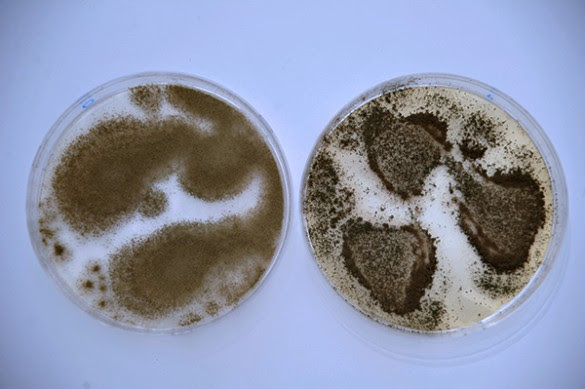 The domesticated species A. oryzae is very closely related to the wild species A. flavus, with the two species having 99.5 percent of their genomes in common. By comparison, humans and chimpanzees share 99.0 percent of their genomes and the variation between individual humans is about 0.1 percent. However, A. oryzae is non-toxic and generally regarded as safe by the U.S. Department of Agriculture. By contrast, A. flavus is a destructive agricultural pest of several important seed crops and produces the potent natural carcinogen aflatoxin.

In the production of sake, A. oryzae acts like a “cell factory” that converts the starch in milled rice to sugars with remarkable efficiency, which a second domesticated microbe, the brewer’s yeast Saccharomyces cerevisiae transforms into alcohol. 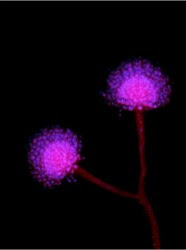 The study found that A. oryzae was domesticated from anA. flavus-like ancestor, a process that involved extensive remodeling of the mold’s genome. The researchers propose that the process began when early sake brewers in the Far East stumbled upon a strain of A. flavus that didn’t produce aflatoxin. Once inside the protected, food-rich environment that the brewers crafted for them, the fungi began adapting to it, undergoing changes in both the production of enzymes that break down starch into sugar and which provide the brewer’s yeast the raw material for producing alcohol, and of secondary metabolites that the mold uses for additional functions like defense and protection. These changes generally involved the “up-regulation” of its primary metabolism, allowing it to grow faster and produce more sugar and the “down-regulation” of its secondary metabolism so that, the researchers hypothesize, its products do not harm the yeast.

“Our data argue that over a few millennia sake brewers created conditions that selected for desired variations in the genetic makeup of Aspergillus flavus from the wild, resulting in the gradual accumulation of small- and large-scale genetic and functional changes that createdAspergillus oryzae,” Gibbons said.

The study also suggests that there is a fundamental difference in the domestication process in microbes and that in animals and plants. Animal and plant breeding has largely been focused on altering genetic pathways that affect growth and form. By contrast, microbial domestication appears to center on altering metabolism, the set of processes that produce chemicals and energy.

“It’s really too bad that people learn to fear microbes,” said Rokas. “Their vast majority actually has a lot of beneficial uses.”

The research was funded by grants from the National Institutes of Health, the National Science Foundation and the Searle Scholars Program.