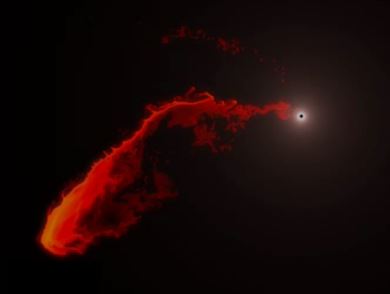 A giant gas cloud is on collision course with the black hole in the center of our galaxy in 2013. This is a unique opportunity to observe how a super massive black hole sucks in material, in real time

The black hole at the centre of the galaxy, formally known as Sagittarius A*, fascinates scientists. By mid-2013 a gas cloud is expected to pass in its vicinity at a distance of only 36 light-hours (equivalent to 40.000.000.000 km), which is extremely close in astronomical terms. 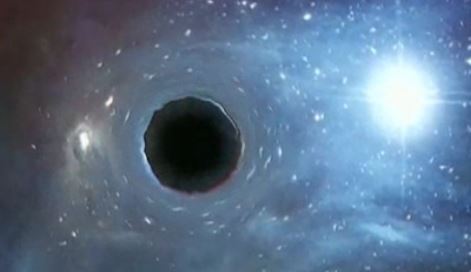 For the past 20 years, Stefan Gillessen, astrophysicist at the Max Planck Institute for Extraterrestrial Physics in Munich, Germany, has been observing the black hole. “So far there were only two stars that came that close to Sagittarius A*”, he says. “They passed unharmed, but this time will be different: the gas cloud will be completely ripped apart by the tidal forces of the black hole." A black hole is what remains after a super massive star dies. When the "fuel" of a star runs low, it will first swell and then collapse to a dense core. If this remnant core has more than three times the mass of our Sun, it will transform to a black hole.


Direct observations of such black holes are impossible because they are coal-black and do not emit light or matter. But astronomers can identify a black hole indirectly due to the gravitational forces observed in their vicinity. 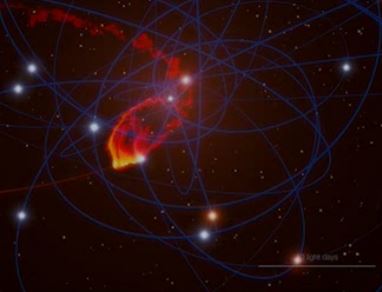 So-called super massive black holes are the largest type of black holes. Their mass equals hundreds of thousands to a billion times the mass of our sun. The centre of all galaxies is thought to contain super massive black holes. But their origin is not fully understood and astrophysicists can only speculate as to what happens inside them. Hence the imminent collision is of great interest to scientists as it should provide some new insights.

Reinhard Genzel leads the team of astronomers from the European Southern Observatory which has discovered the gas cloud about to collide with the black hole at the heart of our galaxy and studied its trajectory. According to their observations, its speed has nearly doubled in the last seven years, reaching more than 8 million km/h.

The cloud’s edges have already started to shred and it is expected to break up completely over the coming months. As we near the collision, the cloud is expected to get much hotter. It will also probably start to emit X-rays as a result of the interaction with the black hole. This event will provide astronomers and astrophysicists a unique opportunity to observe how a gas cloud behaves so close to one of the most mysterious objects in our universe.

A monitoring program to novae in our neighboring galaxy Andromeda led to the discovery of an extremely bright X-ray source, J004243.6 XMMU 412,519. Subsequent observations in the radio region indicate the existence of a high-energy particle beam, which is driven by the massive central object. This again is an indication that this source indeed contains a stellar black hole, the matter with a very high rate of stretches, which is close to the theoretical maximum. Through the observations and analysis of both the radiation from the accretion disk and the matter in the particle beam, astronomers can learn more about the processes around a stellar black hole.

This animation shows the observations of bright X-ray source J004243.6 XMMU 412,519 in our neighboring galaxy Andromeda across six months. In this region there are a number of other floating objects, but only the ULX showed the extreme increase in brightness in X-rays and the radio signal of a jet of high-energy particles, which is ejected from the area surrounding the stellar black hole.

Black holes are invisible because their extreme gravity even light swallowed.However, if a black hole accretes matter from its surroundings, this material is heated and glows brightly in X-rays. In addition to the accretion disk around the black hole often form-energy particle beams, called jets, in which high-energy plasma leaves the system. These jets are also driven by the gravity of the black hole and emit a strong radio signal.Accretion disks and jets are thus two aspects of the same phenomenon, and by astronomers examine both simultaneously, they can take a close look at the physical processes that occur in the vicinity of a black hole.

An international team of astronomers from institutions in Germany, Britain and other countries have now analyzed a particularly interesting source: in January 2012, Wolfgang Pietsch discovered by Max Planck Institute for Extraterrestrial Physics is a very bright X-ray source ("ultraluminous X-ray source," ULX) as part of an observing campaign of the Andromeda galaxy. This is only the second ULX in the Andromeda galaxy, and it was immediately flagged for follow-up observations in the radio band.

This artist's impression shows the source XMMU J004243.6 +412519, an X-ray binary system with a black hole of stellar mass, which accretes matter from a less massive companion star.The X-ray data and other radio observations suggest a transition to a higher accretion rate and that caused radio jets - particle beams from high-energy plasma that are ejected from the vicinity of the black hole. 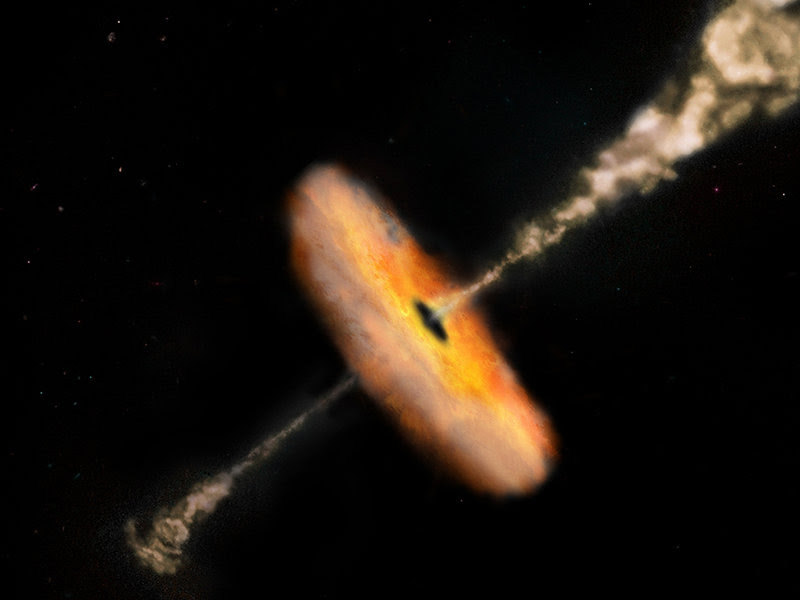 "This extremely bright X-ray sources are very interesting objects for us astronomers because they can shine even brighter in X-rays as a complete galaxy," says Wolfgang Pietsch of the Max Planck Institute for Extraterrestrial Physics. "In this case, we have not only seen the extreme increase in brightness in X-rays, but also that the spectrum changed, indicating a change in the accretion rate of the black hole."

The ULX was discovered during an observing campaign, with the astronomers want to see and observe supernovae. These are binary systems in which a white dwarf star accretes material from a companion. This leads to a nuclear explosion on the surface of the white dwarf and increased emission of soft X-rays - so far over the course of this program, more than 75 supernovae discovered in the Andromeda galaxy. An interesting by-product but it is also the detection of X-ray binaries, in which there is a neutron star or a black hole and the radiation at much higher X-ray energies - in the extreme case when the ULX.

Astronomers could pursue the ULX six months and thereby see how the source was dramatically brighter and faded again. The data suggest that the black hole very much material from its surroundings swallows, the accretion rate should be close to the like or even the theoretical maximum for spherical objects. Such data allow astronomers to learn more about how to change the structure of the accretion disk at such high rates, and possibly, making the high-energy particle beams, or "jets" are triggered. Such a jet has now been observed, in fact, at radio wavelengths - it was the first time that a radio jet was discovered by a stellar black hole outside our own galaxy. "We were able to watch a black hole while enjoying a multi-course meals, from light appetizers, as the source was dark, about the intertwining of the main course, as it really bright again chien, to the dessert, as she slowed again "says Matthew Middleton of the University of Durham. "Besides, let the black hole as well as steam These jets show us clearly that these extremely bright X-ray source -. And so other ULX - just a typical remnant of a star with about 10 times the sun's mass is, the swallows as much material as is humanly possible. "