Titan Gets A Dune "Makeover"

Titan's siblings must be jealous. While most of Saturn's moons display their ancient faces pockmarked by thousands of craters, Titan – Saturn's largest moon – may look much younger than it really is because its craters are getting erased. Dunes of exotic, hydrocarbon sand are slowly but steadily filling in its craters, according to new research using observations from NASA's Cassini spacecraft.

This image taken with the Cassini radar instrument shows two craters on Titan: the crater Sinlap (left), which is a relatively 'fresh' crater, with a depth-to-diameter ratio close to what we see on Ganymede, and Soi (right), an extremely degraded crater, with a very small depth compared to similar craters on Ganymede. These craters are both about 80 km (almost 50 miles) in diameter. The Sinlap image was taken on Feb. 15, 2005. The Soi image is a mosaic of two images from May 21, 2009 and July 22, 2006. 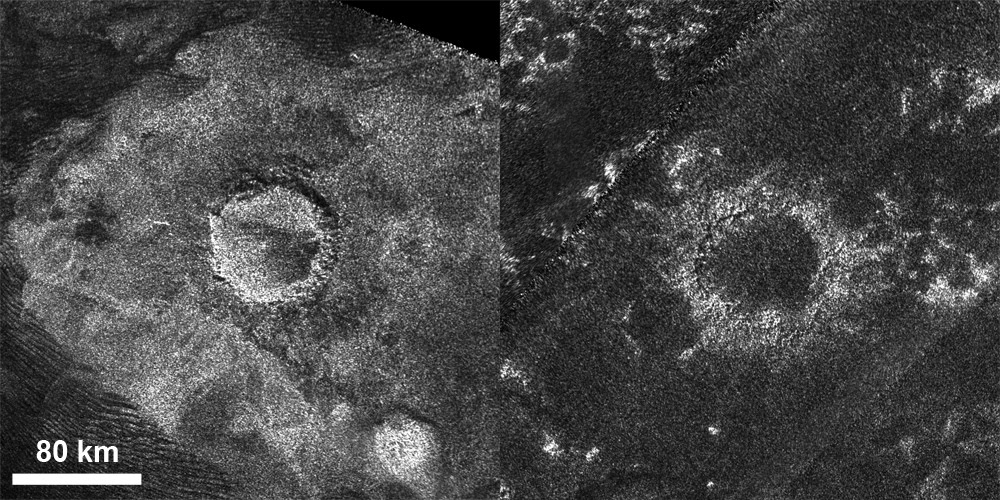 "Most of the Saturnian satellites – Titan's siblings – have thousands and thousands of craters on their surface. So far on Titan, of the 50 percent of the surface that we've seen in high resolution, we've only found about 60 craters," said Catherine Neish, a Cassini radar team associate based at NASA's Goddard Space Flight Center, Greenbelt, Md. "It's possible that there are many more craters on Titan, but they are not visible from space because they are so eroded. We typically estimate the age of a planet's surface by counting the number of craters on it (more craters means an older surface). But if processes like stream erosion or drifting sand dunes are filling them in, it's possible that the surface is much older that it appears."

"This research is the first quantitative estimate of how much the weather on Titan has modified its surface," adds Neish.

Titan is the only moon in the solar system with a thick atmosphere, and the only world besides Earth known to have lakes and seas on its surface. However, with a frigid surface temperature of around minus 290 degrees Fahrenheit (94 kelvins), the rain that falls from Titan's skies is not water but instead liquid methane and ethane, compounds that are normally gases on Earth.

Neish and her team made the discovery by comparing craters on Titan to craters on Jupiter's moon Ganymede. Ganymede is a giant moon with a water ice crust, similar to Titan, so craters on the two moons should have similar shapes. However, Ganymede has almost no atmosphere and thus no wind or rain to erode its surface.

"We found that craters on Titan were on average hundreds of yards (meters) shallower than similarly sized craters on Ganymede, suggesting that some process on Titan is filling its craters," says Neish, who is lead author of a paper about this research published online in the journal Icarus Dec. 3, 2012.

Titan's swirling south-polar vortex stands out brightly against the other clouds of the south pole (seen at the lower right of the image). The Cassini spacecraft is monitoring the development of the south polar vortex to help understand seasonal changes on Saturn's largest moon

Titan's atmosphere is mostly nitrogen with a trace of methane and other, more complex molecules made of hydrogen and carbon (hydrocarbons). The source of Titan's methane remains a mystery because methane in the atmosphere is broken down over relatively short timescales by sunlight. Fragments of methane molecules then recombine into more complex hydrocarbons in the upper atmosphere, forming a thick, orange smog that hides the surface from view. Some of the larger particles eventually rain out on to the surface, where they appear to get bound together to form the sand.

"Since the sand appears to be produced from the atmospheric methane, Titan must have had methane in its atmosphere for at least several hundred million years in order to fill craters to the levels we are seeing," says Neish. However, researchers estimate Titan's current supply of methane should be broken down by sunlight within tens of millions of years, so Titan either had a lot more methane in the past, or it is being replenished somehow.

Team members say it's possible that other processes could be filling the craters on Titan: erosion from the flow of liquid methane and ethane for example. However, this type of weathering tends to fill a crater quickly at first, then more slowly as the crater rim gets worn down and less steep. If liquid erosion were primarily responsible for the infill, then the team would expect to see a lot of partially filled craters on Titan. "However, this is not the case," says Neish. "Instead we see craters at all stages; some just beginning to be filled in, some halfway, and some that are almost completely full. This suggests a process like windblown sand, which fills craters and other features at a steady rate."

All solid materials under stress flow very slowly over time. This is called viscous flow, and it is like what happens when someone takes a scoop out of a fresh tub of whipped cream -- the material slowly flows in to fill the hole and flatten the surface. Craters on icy satellites tend to get shallower over time as the ice flows viscously, so it's possible that some of the shallow craters on Titan are simply much older or experienced a higher heat flow than the similarly sized, fresh craters on Ganymede studied in this work.

However, Titan's crust is mostly water ice, and at the extremely low temperatures on Titan, ice shouldn't flow enough to account for such a large difference in depth compared to the Ganymede craters, according to the team. Also, just like stream erosion, deformation from viscous flow tends to happen rapidly at first, then more slowly as the material adjusts, so one would expect to see a lot of partially filled craters on Titan if its surface was deforming easily through viscous flow.

As Cassini flies past Titan on its multi-year tour of Saturn and its moons, the radar instrument gradually builds up a map of the surface. To date, the instrument has provided data in strips covering approximately 50 percent of Titan's surface. The craters measured by the team are all within about 30 degrees of the equator, a relatively dry region on Titan.

"However, the presence of liquids on the surface and in the near subsurface can also cause extensive modification to crater shape, as is observed on Earth," says Neish. "In the case of Titan, liquids consist of hydrocarbons, either as wet sediments (such as those observed at the Huygens landing site) or shallow marine environments (such as the lakes observed at the north and south poles). Craters formed in similar environments on Earth lack any significant surface topography, including the absence of a raised rim, as wet sediments slump into the crater. It is possible that the lack of topography associated with marine-target impacts may help to explain the relative scarcity of impact craters observed near the poles of Titan. If Titan's polar regions are saturated by liquid hydrocarbons, craters formed in those regions may lack any recognizable topographic expression."

The team thinks these considerations are good areas for more research, but based on the data so far, the difference in depth between craters on Titan and Ganymede is best explained by filling from windblown sand, although erosion from liquids and viscous flow might contribute to the modification of Titan's craters.

The Cassini-Huygens mission is a cooperative project of NASA, the European Space Agency and ASI, the Italian Space Agency. JPL, a division of the California Institute of Technology in Pasadena, manages the mission for NASA's Science Mission Directorate, Washington. The Cassini orbiter was designed, developed and assembled at JPL. The radar instrument was built by JPL and the Italian Space Agency, working with team members from the US and several European countries.