The 3D Fireworks Of A Star

In 1901 the star GK Persei gave off a powerful explosion that has not stopped growing and astonishing ever since. Now a team of Spanish and Estonian astronomers has reconstructed the journey of the emitted gas in 3D which, contrary to predictions, has hardly slowed down its speed of up to 1,000 km/s after all this time.

This is a 3D view of the remnant of Nova Persei 1901 (the green arrow points to Earth). 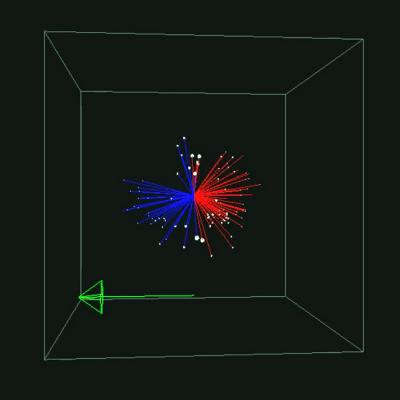 Thanks to the images captured from the Isaac Newton Telescope and the Nordic Optical Telescope in La Palma (Canary Islands, Spain), a European team of astronomers has constructed a three dimensional map of the remnant of a nova, or in other words, what was left of the star after its explosion. The results have just been published in the Astrophysical Journal.

This shows the apparent expansion of the remnant Nova Persei 1901
Credit: Liimets at al./ApJ.

The protagonist of this story is the star GK Persei situated at 'just' 1,300 light years away from Earth. It is also known as Nova Persei 1901 because a strong thermonuclear eruption occurred on its surface on the 21st February 1901. On that day astronomers observed how its brightness suddenly increased to such an extent that it became one of the brightest stars in the skies.

The surprising thing is that the explosion created remaining material made up of gaseous knots, which become visible in 1916. "From then the visual spectacle has been similar to that of a firework display seen in slow motion," claims Miguel Santander, researcher at Spanish National Observatory and coauthor of the study.

After patient work to gather images, the team was able to measure the movements of more than 200 knots as well as the radial velocity using the Doppler effect, which allows to determine if they are getting closer or moving further away from us. In this way the 3D map of the nova was created and its dynamic was analysed.

"Such data are rarely available in astrophysics because as a general rule apparent expansion or, in other words, in the layout of the sky, the majority of objects cannot be seen," outlines another of the authors, Romano Corradi, from the Astrophysics Institute of the Canary Islands.

In any case, the main result of this work "is that the gas seems to be moving further away in a ballistic or free manner and is hardly slowing down, contrary to what was thought in previous studies," comments the lead author of the investigation, Tiina Liimets of the Tartu Observatory in Estonia.

Until now it was thought that the gas from the explosion would slow down "significantly" due to the large quantity of matter in its path that the star has expelled previously. However, its speed has remained between a range of 600 and 1000 kilometres per second.

Long before the explosion in 1901, more than one hundred thousand years ago, GK Persei had already undergone a massive transformation from a red giant to a white dwarf. This process expelled its external layers forming a planetary nebula, which is a giant gas cloud within which the nova is now growing in 3D.

Contacts and sources:
SINC
FECYT - Spanish Foundation for Science and Technology
on January 24, 2013