This collage of solar images from NASA's Solar Dynamics Observatory (SDO) shows how observations of the sun in different wavelengths helps highlight different aspects of the sun's surface and atmosphere. (The collage also includes images from other SDO instruments that display magnetic and Doppler information.) 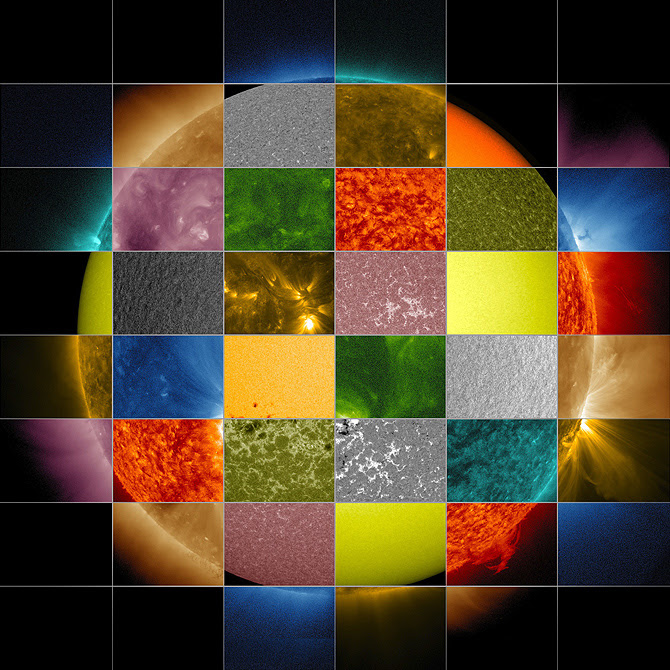 
Taking a photo of the sun with a standard camera will provide a familiar image: a yellowish, featureless disk, perhaps colored a bit more red when near the horizon since the light must travel through more of Earth's atmosphere and consequently loses blue wavelengths before getting to the camera's lens. The sun, in fact, emits light in all colors, but since yellow is the brightest wavelength from the sun, that is the color we see with our naked eye -- which the camera represents, since one should never look directly at the sun. When all the visible colors are summed together, scientists call this “white light.”

Specialized instruments, either in ground-based or space-based telescopes, however, can observe light far beyond the ranges visible to the naked eye. Different wavelengths convey information about different components of the sun's surface and atmosphere, so scientists use them to paint a full picture of our constantly changing and varying star.

Yellow-green light of 5500 Angstroms, for example, generally emanates from material of about 10,000 degrees F (5700 degrees C), which represents the surface of the sun. Extreme ultraviolet light of 94 Angstroms, on the other hand, comes from atoms that are about 11 million degrees F (6,300,000 degrees C) and is a good wavelength for looking at solar flares, which can reach such high temperatures. By examining pictures of the sun in a variety of wavelengths – as is done through such telescopes as NASA's Solar Dynamics Observatory (SDO), NASA's Solar Terrestrial Relations Observatory (STEREO) and the ESA/NASA Solar and Heliospheric Observatory (SOHO) -- scientists can track how particles and heat move through the sun's atmosphere.

We see the visible spectrum of light simply because the sun is made up of a hot gas – heat produces light just as it does in an incandescent light bulb. But when it comes to the shorter wavelengths, the sun sends out extreme ultraviolet light and x-rays because it is filled with many kinds of atoms, each of which give off light of a certain wavelength when they reach a certain temperature. Not only does the sun contain many different atoms – helium, hydrogen, iron, for example -- but also different kinds of each atom with different electrical charges, known as ions. Each ion can emit light at specific wavelengths when it reaches a particular temperature. Scientists have cataloged which atoms produce which wavelengths since the early 1900s, and the associations are well documented in lists that can take up hundreds of pages.

Solar telescopes make use of this wavelength information in two ways. For one, certain instruments, known as spectrometers, observe many wavelengths of light simultaneously and can measure how much of each wavelength of light is present. This helps create a composite understanding of what temperature ranges are exhibited in the material around the sun. Spectrographs don't look like a typical picture, but instead are graphs that categorize the amount of each kind of light.

On the other hand, instruments that produce conventional images of the sun focus exclusively on light around one particular wavelength, sometimes not one that is visible to the naked eye. SDO scientists, for example, chose 10 different wavelengths to observe for its Atmospheric Imaging Assembly (AIA) instrument. Each wavelength is largely based on a single, or perhaps two types of ions – though slightly longer and shorter wavelengths produced by other ions are also invariably part of the picture. Each wavelength was chosen to highlight a particular part of the sun's atmosphere.

From the sun's surface on out, the wavelengths SDO observes, measured in Angstroms, are:
4500: Showing the sun's surface or photosphere.
1700: Shows surface of the sun, as well as a layer of the sun's atmosphere called the chromosphere, which lies just above the photosphere and is where the temperature begins rising.
1600: Shows a mixture between the upper photosphere and what's called the transition region, a region between the chromosphere and the upper most layer of the sun's atmosphere called the corona. The transition region is where the temperature rapidly rises.
304: This light is emitted from the chromosphere and transition region.
171: This wavelength shows the sun's atmosphere, or corona, when it's quiet. It also shows giant magnetic arcs known as coronal loops.
193: Shows a slightly hotter region of the corona, and also the much hotter material of a solar flare.
211: This wavelength shows hotter, magnetically active regions in the sun's corona.
335: This wavelength also shows hotter, magnetically active regions in the corona.
94: This highlights regions of the corona during a solar flare.
131: The hottest material in a flare.For more technical information about which ions produce which wavelengths, roll your mouse over the grid of SDO images below.

Each of the wavelengths observed by NASA's Solar Dynamics Observatory (SDO) was chosen to emphasize a specific aspect of the sun's surface or atmosphere. This image shows imagery both from the Advanced Imaging Assembly (AIA), which helps scientists observe how solar material moves around the sun's atmosphere, and the Helioseismic and Magnetic Imager (HMI), which focuses on the movement and magnetic properties of the sun's surface. 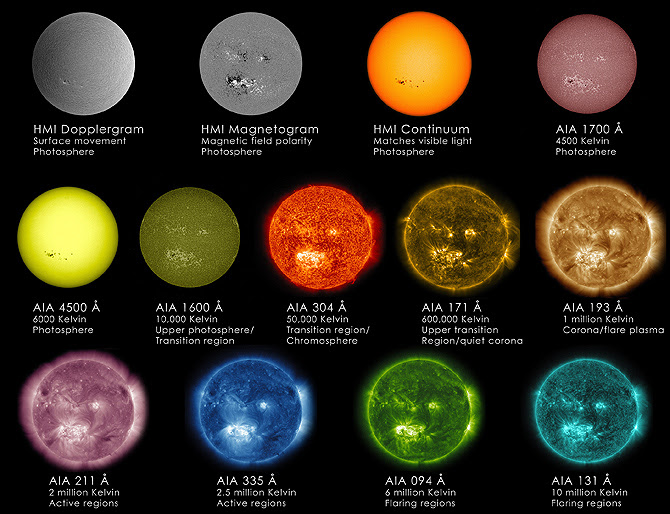 › View detail for all wavelengths

If the real-time images below right appear black, the satellite data feed is temporarily unavailable. Please check back later. 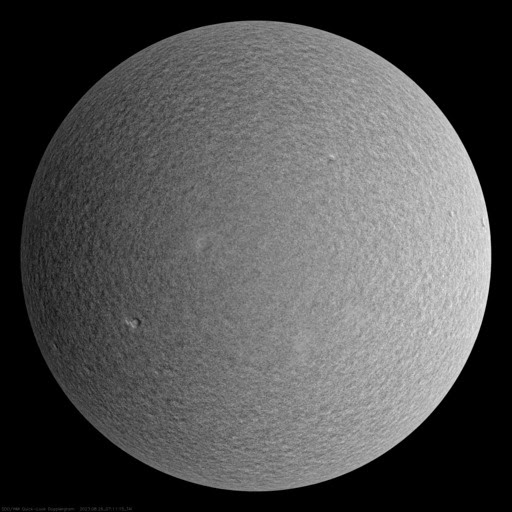 
Ultraviolet light continuum, shows the surface of the sun. As well as a layer of the sun's atmosphere called the chromosphere, which lies just above the photosphere and is where the temperature begins rising. Temperatures: 4500 Kelvin, Solar Region: Photosphere/Chromosphere
› View real-time AIA 1700 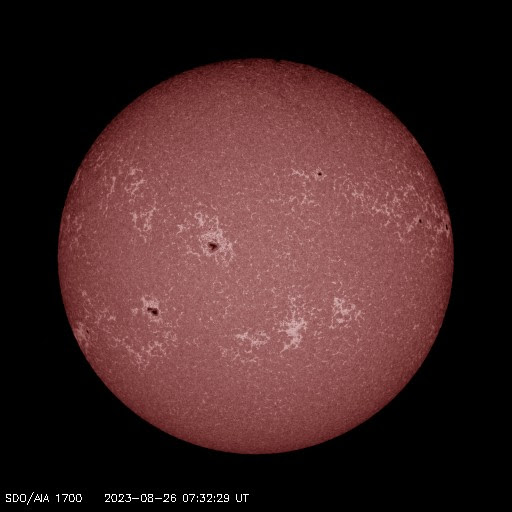 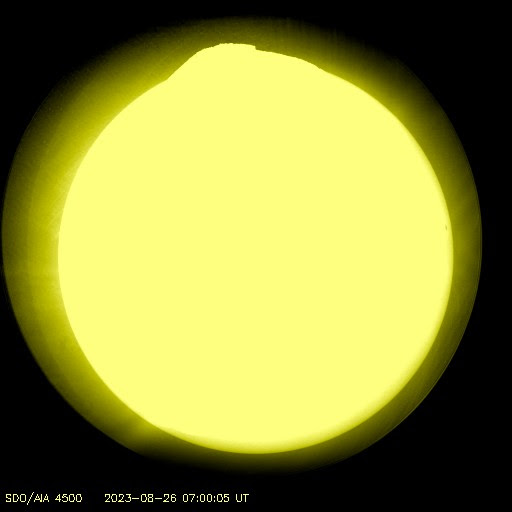 Emitted by carbon-4 (C IV) at around 10,000 Kelvin. C IV at these temperatures is present in the upper photosphere and what's called the transition region, a region between the chromosphere and the upper most layer of the sun's atmosphere called the corona. The transition region is where the temperature rapidly rises. SDO images of this wavelength are typically colorized in dark yellow. Solar Region: Upper Photosphere/Transition Region
› View real-time AIA 1600 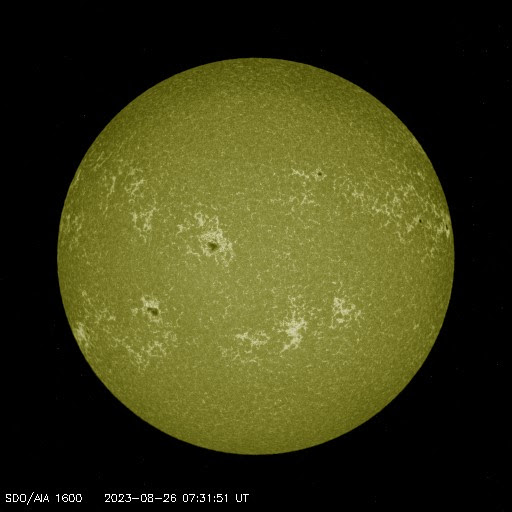 Emitted by helium-2 (He II) at around 50,000 Kelvin. This light is emitted from the chromosphere and transition region. SDO images of this wavelength are typically colorized in red. Solar Region: Transition Region/Chromasphere
› View real-time AIA 304 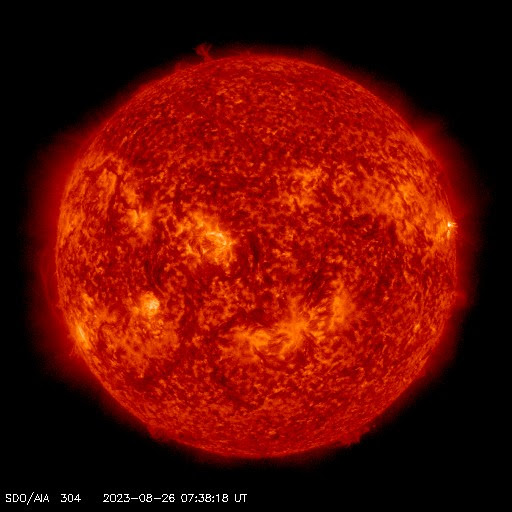 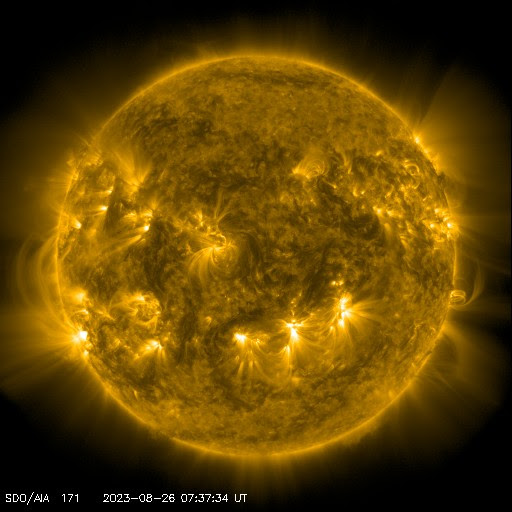 Emitted by iron-12 (Fe XII) at 1,000,000 K and iron 24 (Fe XXIV) at 20,000,000 Kelvin. The former represents a slightly hotter region of the corona and the later represents the much hotter material of a solar flare. This wavelength is typically colorized in light brown. Solar Region: Corona/Flare Plasma
› View real-time AIA 193 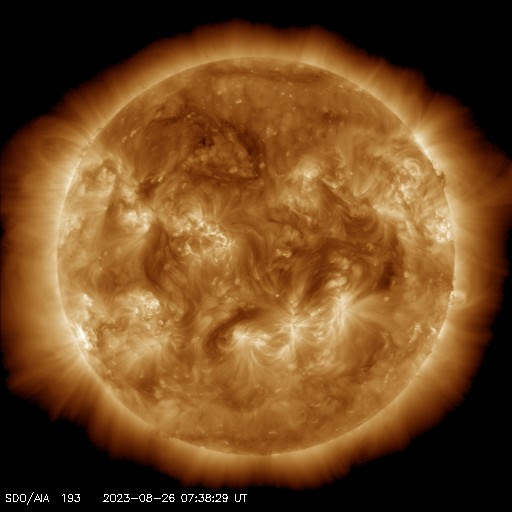 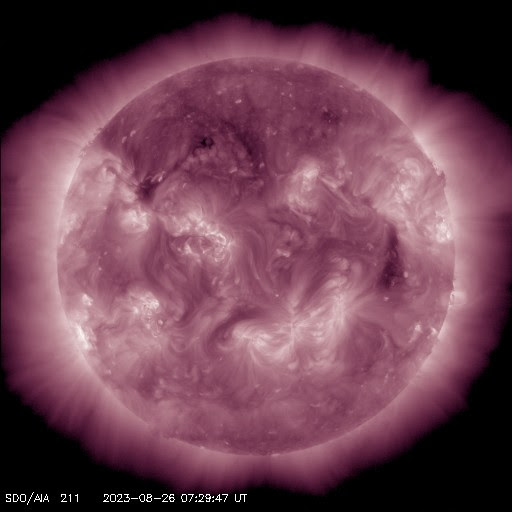 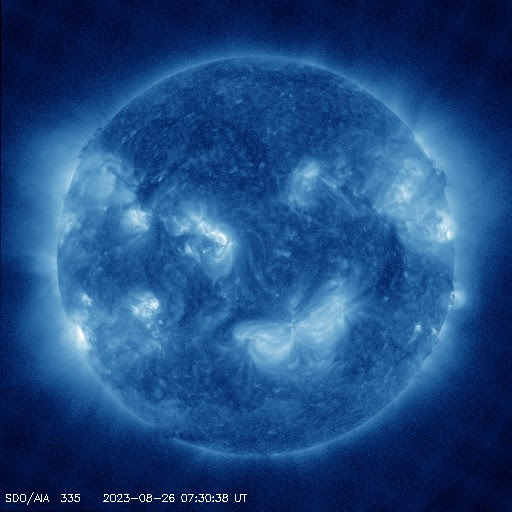 Emitted by iron-18 (Fe XVIII) at temperatures of 6,000,000 Kelvin. Temperatures like this represent regions of the corona during a solar flare. The images are typically colorized in green. Solar Region: Flaring Regions
› View real-time AIA 094 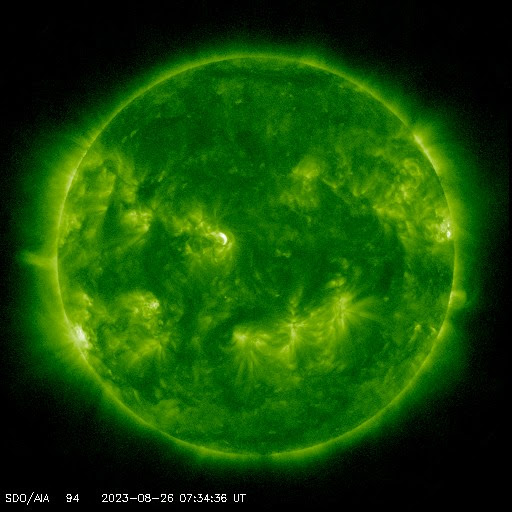 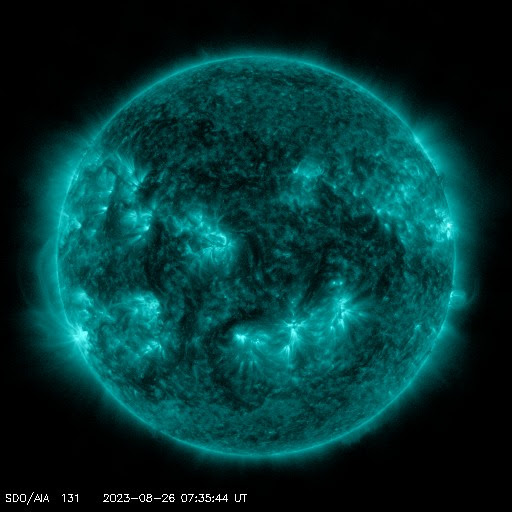