According to a Johns Hopkins earth scientist, the hole in the Antarctic ozone layer has caused changes in the way that waters in those southern oceans mix – a situation that has the potential to alter the amount of CO2 in the atmosphere and eventually could have an impact on global climate change.

In a paper published in this week's issue of the journal Science, Darryn W. Waugh and his team show that subtropical intermediate waters in the southern oceans have become "younger" as the upwelling, circumpolar waters have gotten "older" – changes that are consistent with the fact that surface winds have strengthened as the ozone layer has thinned.

"This may sound entirely academic, but believe me, it's not," said Waugh, of the Morton K. Blaustein Department of Earth and Planetary Sciences at Johns Hopkins' Krieger School of Arts and Sciences. "This matters because the southern oceans play an important role in the uptake of heat and carbon dioxide, so any changes in southern ocean circulation have the potential to change the global climate."

Waugh's team used measurements taken from the early 1990s to the mid-to-late 2000s of the amount of a chemical compound known as "chlorofluorocarbon-12," or CFC-12, in the southern oceans. CFC-12 was first produced commercially in the 1930s and its concentration in the atmosphere increased rapidly until the 1990s when it was phased out by the Montreal Protocol on substances that deplete the ozone layer. (Prior to the Montreal Protocol, CFC-12 was used in products such as aerosol hairsprays and refrigerants and in air conditioning systems.)

From those ocean measurements, Waugh's team was able to infer changes in how rapidly surface waters have mixed into the depths of the southern oceans. Because they knew that concentrations of CFCs at the ocean surface increased in tandem with those in the atmosphere, they were able to surmise that the higher the concentration of CFC-12 deeper in the ocean, the more recently those waters were at the surface. 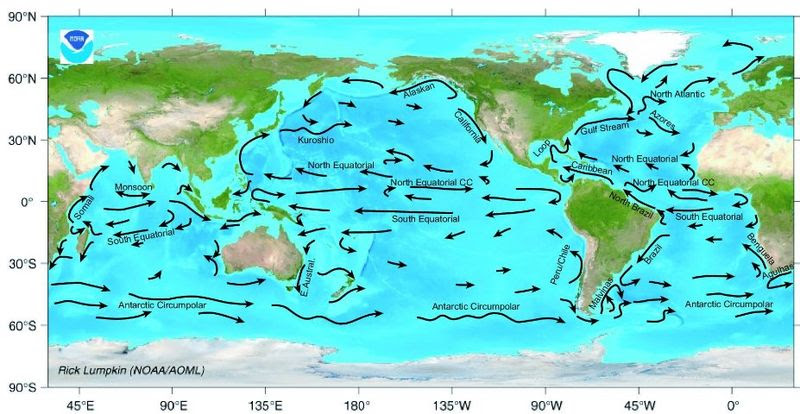 The inferred age changes – "younger in the subtropics, "older" nearer the South Pole -- are consistent with the observed intensification of surface westerly winds, which have occurred primarily because of the Antarctic ozone hole, suggesting that stratospheric ozone depletion is the primary cause of the changes in ocean ventilation. As stratospheric ozone recovers over the next 50 years, the changes in ventilation may slow or reverse. The impact of continued increases in greenhouse gases in the atmosphere will also need to be considered, however. The combined impact of the two factors on the southern oceans' ventilation and uptake of heat and carbon is an open question.