A powerful cold front moving from the central United States to the East Coast is wiping out spring-like temperatures and replacing them with winter-time temperatures with powerful storms in between. An image released from NASA using data from NOAA's GOES-13 satellite provides a stunning look at the powerful system that brings a return to winter weather in its wake.

On Jan. 30 at 1825 UTC (1:25 p.m. EST), NOAA's GOES-13 satellite captured an image of clouds associated with the strong cold front. The visible GOES-13 image shows a line of clouds that stretch from Canada to the U.S. Gulf Coast and contain powerful thunderstorms with the potential to be severe. The front is moving east to the Atlantic Ocean. 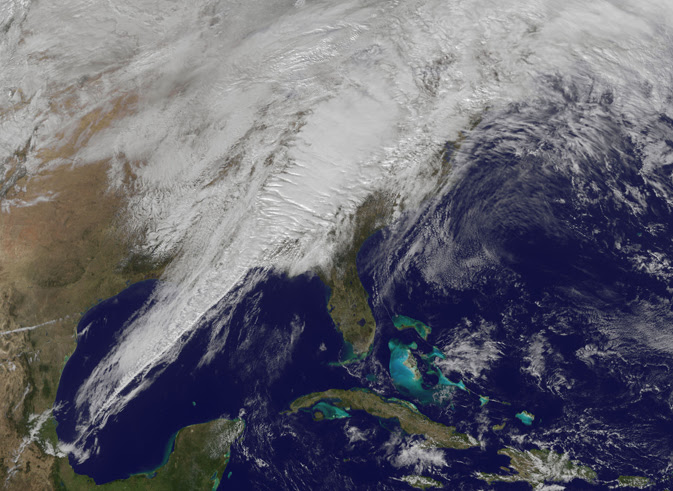 NOAA's GOES-13 satellite continually provides real-time visible and infrared imagery of weather over the eastern United States. The NASA GOES Project, located at NASA's Goddard Space Flight Center in Greenbelt, Md., created the image from GOES data. The colorized image uses GOES-13 satellite visible data of clouds, and is overlaid on a U.S. map created by imagery from the Moderate Resolution Spectroradiometer instrument (MODIS), an instrument that flies aboard both the NASA Aqua and Terra satellites.

NOAA's National Weather Service Storm Prediction Center (SPC) in Norman, Okla., warned of the risk of severe weather on Jan. 30, stretching from the upper Ohio Valley southward to the central Gulf Coast and eastward to the Mid-Atlantic and southeastern U.S. coast. According to SPC, the main threat will be damaging wind along with the possibility of tornadoes, especially across eastern Alabama into western Georgia.

Early on Jan. 30, officials in Tennessee and Georgia already reported damages from severe storms as the squall line rolled through.

At noon EST on Jan. 30, severe thunderstorm watches were issued by the SPC for several states. The watches include: the western Maryland panhandle, southeast Ohio, southwest Pennsylvania, western Virginia and West Virginia.

This same storm system brought severe weather to the Mississippi Valley on Tuesday, Jan. 29. The storm system has already brought great changes to the Midwest, where Chicago experienced highs in the 60s (F) earlier in the week and today, Jan. 30, is only near 40 F. Chicago is also expecting snow later today and by tomorrow night, Jan. 31, wind chills at night are expected to drop to 10 F to 20 F below zero.