A Kona fisherman has retrieved what could be the sixth confirmed item of Japan tsunami marine debris in Hawaii.

On Tuesday afternoon, Randy Llanes, Kona captain of the fishing vessel Sundowner, brought to Honokohau small boat harbor, a 24-foot Japanese net boat with a deep “V” bow that was found floating about 4 miles out at sea. Other vessels reportedly had been fishing around it that morning, since fish are attracted to the marine growth and the protection a boat provides. 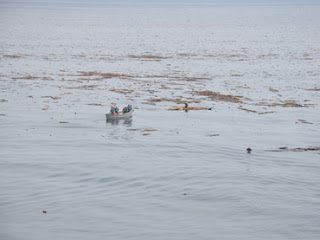 DLNR immediately notified the National Oceanic and Atmospheric Administration’s Marine Debris Program and kept the program informed at all times. NOAA in turn notified its U.S. Coast Guard and National Parks Service contacts. The state Department of Health has been contacted regarding a testing for radiation levels.

While still at sea, Llanes spoke by phone with DLNR’s aquatic invasive species specialist, Jonathan Blodgett, who determined that Llanes had already scraped off blue mussels, an alien species in Hawaii, well out at sea, leaving only typical gooseneck barnacles that are common pelagic species and not harmful to native marine species.

Llanes told DLNR officials the skiff appeared identical to the four other small boats that have arrived in Hawaii waters since October 2012. He said he found it upside down and flipped it over.

As was done with the other four boats, NOAA will work with the Consulate General of Japan in Honolulu and Government of Japan on determination of the vessel’s origin and owner, if possible.

“On behalf of NOAA and the State of Hawaii, we ask that anyone who finds personal items, which may have come from the tsunami, to please report them to county, state and/or federal officials,” said William J. Aila, Jr., DLNR chairperson. “Please show aloha and respect to the people of Japan, and the regions that suffered devastation from the 2011 tsunami. Remember, these items may be all someone has left.”

By being able to communicate with this boater in advance of his arrival, DLNR was able to quickly provide important guidance to prevent introduction of possible invasive marine species to island waters, and to ensure the skiff was met on arrival and properly handled and stored pending ownership verification.

Chronology
As of Jan. 10, 2013 — NOAA has received more than 1,400 reports of potential Japan tsunami marine debris to disasterdebris@noaa.gov from the U.S., Canada, and Mexico. With the assistance of the Consulates and Government of Japan, 18 items have been confirmed as lost during the March 2011 tsunami.


“While not every item may be traceable back to Japan, it is still important that the public help ensure the health and safety of our community and our coastal environment by reporting bulky, hazardous, large or unusual items in our waters or coastline,” Aila said. “Smaller items can be reported and disposed of safely.

“We are thankful for the efforts of community groups on every island who have been active in reporting items to the state and NOAA, and helping to properly dispose of them.”

The dock is located within the Olympic Coast National Marine Sanctuary and within a designated wilderness portion of Olympic National Park. Resource protection and visitor safety are fundamental to the mission of both agencies.

The dock weighs about 185 tons and is 65 feet long, 20 feet wide and 7.5 feet tall. Although the dock has stayed in the same general location since its arrival on the beach, it is still quite mobile in the surf. As changing tides and waves continue to shift and move the dock, the dock will continue to batter the coastline, creating a hazard for visitors and wildlife and damaging both the coastal environment and the dock. The intertidal area of the Olympic Coast is home to the most diverse ecosystem of marine invertebrates and seaweeds on the west coast of North America.

Most of the dock’s volume is Styrofoam-type material, which is encased in steel reinforced concrete. The concrete has already been damaged, exposing rebar and releasing foam into the ocean and onto the beach where it can potentially be ingested by fish, birds and marine mammals. Leaving the dock in place could result in the release of over 200 cubic yards of foam into federally protected waters and wilderness coast.

Determining the origin of marine debris is challenging. When possible, NOAA works closely with the government of Japan to determine whether an item originated in the tsunami impact zone. To date, 19 items have been definitively traced back to the tsunami, typically by registration number or some other unique marking. This is the fourth confirmed item found in Washington.

In this case, NOAA worked with, and greatly appreciates the assistance from, many Japanese agencies to identify where the dock came from, including:

NOAA has announced a Request for Proposal (RFP) to solicit proposals from professional marine salvage contractors. Information can be found at:https://www.fbo.gov/spg/DOC/NOAA/WASC/AB133C-13-RP-0144/listing.html.

For the latest updates on the 65-foot dock that washed ashore in Olympic National Park, visit the Washington Department of Ecology's incident webpage.

To report findings of possible tsunami marine debris, please call DLNR at (808) 587-0400 or send an email to dlnr.marine.debris@hawaii.gov and disasterdebris@noaa.gov.
on January 18, 2013