In A Galaxy Far Far Away, Astronomers Make Stellar Discovery

This new study observes 13 smaller satellite galaxies orbiting around the immense Andromeda galaxy in a way similar to how the planets in our solar system orbit around the sun. The galaxies are orbiting on a thin, pancake-like plane at a scale 900 million times larger than our own solar system.

The immense Andromeda galaxy, also known as Messier 31 or simply M31, is captured in full in this new image from NASA's Wide-field Infrared Survey Explorer, or WISE. The mosaic covers an area equivalent to more than 100 full moons, or five degrees across the sky. WISE used all four of its infrared detectors to capture this picture (3.4- and 4.6-micron light is colored blue; 12-micron light is green; and 22-micron light is red). Blue highlights mature stars, while yellow and red show dust heated by newborn, massive stars. 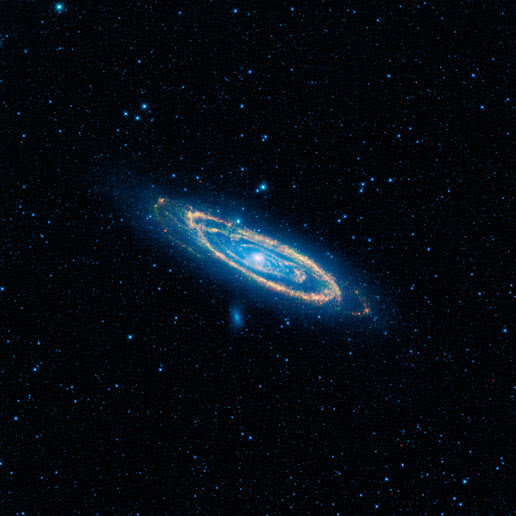 "These dwarf galaxies appear to have formed together in the structure, and our analysis is showing their stars seem to have formed at a similar epoch in the early universe," says Peter Smith, a Dalhousie University graduate student who works on follow up research.

The Lambda-Cold Dark Matter (Lambda-CDM) model struggles to explain the formation of these thirteen satellite galaxies orbiting around Andromeda. The Lambda-CDM is a standard model in astrophysics that assumes galaxies collide and merge with one another to grow mass.

The infrared Spitzer image reveals new insight into Andromeda's well-known ring of star formation. This ring appears to be split into two pieces, forming the hole to the lower right. These asymmetrical features may have been caused by interactions with satellite galaxies around Andromeda

"This tells us that this hierarchical buildup that gravitational simulations predict isn't quite right—as structures like this 'andromeda pancake' never happen in the simulations. We may not understand gravity as well as many would like to believe. It's very hard to test gravity in the very weak field limit," explains Dr. Scott Chapman, a co-author of the study and a professor at Dalhousie University.

The discovery also lends support to theories on how satellite galaxies are orbiting around the Milky Way, which is a much harder activity to observe given the earth's position within it—the galaxy itself blocks our view.

The researchers are working on a followup study that will explore how the orbital system formed the way that it did, working on the hypothesis that all thirteen galaxies must have formed at the same time within the same structure billions of years ago.