Using the unique capabilities of ESA’s Herschel space observatory, astronomers have accurately ‘weighed’ a star’s disc, finding it still has enough mass to spawn 50 Jupiter-sized planets, several million years after most other stars have already given birth.

A star thought to have passed the age at which it can form planets may in fact be creating new worlds. The disk of material surrounding the surprising star called TW Hydrae may be massive enough to make even more planets than we have in our own solar system.

The findings were made using the European Space Agency's Herschel Space Telescope, a mission in which NASA is a participant.

This artist's illustration shows a planetary disk (left) that weighs the equivalent of 50 Jupiter-mass planets. It demonstrates a first-of-its-kind feat from astronomers using the Herschel space observatory. The scientists were able to weigh the planet-forming contents swirling around a young star with the most precision yet. 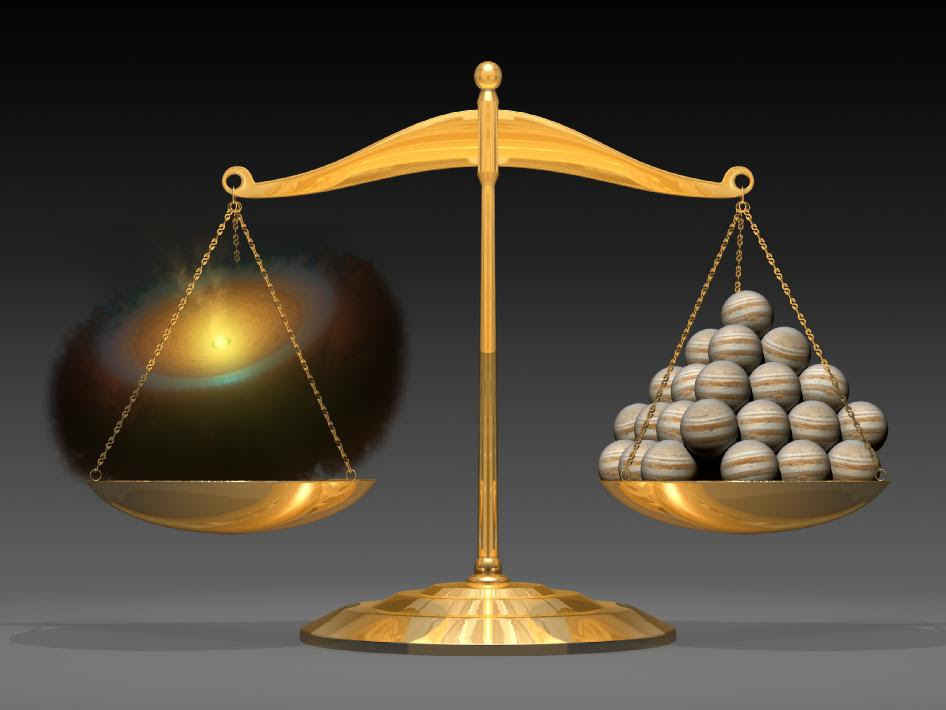 "We didn't expect to see so much gas around this star," said Edwin Bergin of the University of Michigan in Ann Arbor. Bergin led the new study appearing in the journal Nature. "Typically stars of this age have cleared out their surrounding material, but this star still has enough mass to make the equivalent of 50 Jupiters," Bergin said.

In addition to revealing the peculiar state of the star, the findings also demonstrate a new, more precise method for weighing planet-forming disks. Previous techniques for assessing the mass were indirect and uncertain. The new method can directly probe the gas that typically goes into making planets.

Misty Star in the Sea Serpent: This artist's concept illustrates an icy planet-forming disk around a young star called TW Hydrae, located about 175 light-years away in the Hydra, or Sea Serpent, constellation. Astronomers using the Herschel Space Observatory detected copious amounts of cool water vapor, illustrated in blue, emanating from the star's planet-forming disk of dust and gas. The water vapor, which probably comes from icy grains in the disk, is located in the frigid outer regions of the star system, where comets will take shape. 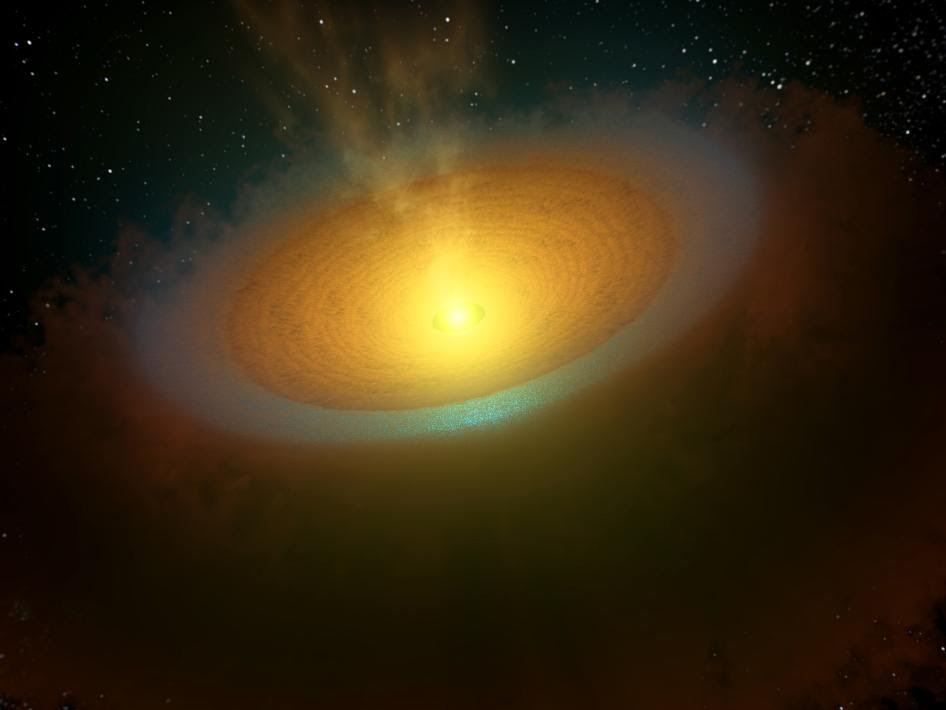 In our own solar system, comets are thought to have carried water to Earth, creating our oceans. A similar process might be taking place around TW Hydrae -- comets could, over the next several millions of years, transport water to young worlds. The Herschel results demonstrate that vast reservoirs of water are available around stars for creating these hypothetical water worlds.

Planets are born out of material swirling around young stars, and the mass of this material is a key factor controlling their formation. Astronomers did not know before the new study whether the disk around TW Hydrae contained enough material to form new planets similar to our own.

"Before, we had to use a proxy to guess the gas quantity in the planet-forming disks," said Paul Goldsmith, the NASA project scientist for Herschel at NASA's Jet Propulsion Laboratory (JPL) in Pasadena, Calif. "This is another example of Herschel's versatility and sensitivity yielding important new results about star and planet formation."

Using Herschel, they were able to take a fresh look at the disk with the space telescope to analyze light coming from TW Hydrae and pick out the spectral signature of a gas called hydrogen deuteride. Simple hydrogen molecules are the main gas component of planets, but they emit light at wavelengths too short to be detected by Herschel. Gas molecules containing deuterium, a heavier version of hydrogen, emit light at longer, far-infrared wavelengths that Herschel is equipped to see. This enabled astronomers to measure the levels of hydrogen deuteride and obtain the weight of the disk with the highest precision yet.

"The new results are another important step in understanding the diversity of planetary systems in our universe," said Bergin. "We are now observing systems with massive Jupiters, super-Earths, and many Neptune-like worlds. By weighing systems at their birth, we gain insight into how our own solar system formed with just one of many possible planetary configurations."

Herschel is a European Space Agency (ESA) cornerstone mission, with science instruments provided by a consortium of European institutes and with important participation by NASA.
"Knowing the mass of a planet-forming disk is crucial to understanding how and when planets take shape around other stars," said Glenn Wahlgren, Herschel program scientist at NASA Headquarters in Washington.

Whether TW Hydrae's large disk will lead to an exotic planetary system with larger and more numerous planets than ours remains to be seen, but the new information helps define the range of possible planet scenarios.