As the gun control debate continues, Kevin D. Bradford, an associate professional specialist in marketing at the University of Notre Dame's Mendoza College of Business, says the focus should be on those who distribute guns, not solely on those who buy them.

Bradford and a team of researchers conducted a first-of-its-kind study on the ways guns move from legal channels into the hands of criminals. In "Counter-marketing in the Courts: The Case of Marketing Channels and Firearms Diversion, published in the Journal of Public Policy and Marketing, they examined 28 thousand pages of court documents, looking at what kinds of guns were used in violent crimes and what kinds of safeguards specific gun manufacturers had in place for distribution.

"The gun industry is cloaked in secrecy," Bradford says. "We found that one percent of gun dealers are responsible for 45 to 60 percent of guns involved in crimes. These dealers divert new guns intended for responsible owners to those that gun restrictions are meant to keep away from the weapons."

The AR-15 comes in many sizes and has many options, depending on the manufacturer. The part shown bottom center is the lowerreceiver with pistol grip and trigger assembly. Under US law the lower alone is the component legally considered the "firearm", no lower receiver may have the capability of shooting more than one shot per trigger pull per National Firearms act. 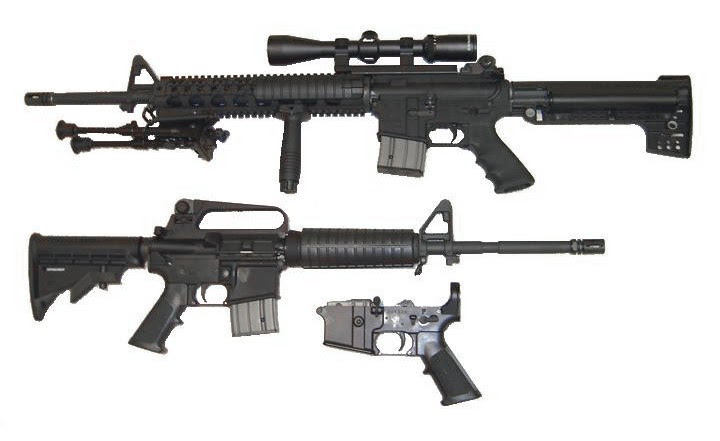 Safeguards are reasonable and popular policies, such as background checks, for shipping dangerous things. Bradford says, shockingly, there are numerous gun manufacturers that do not require their collaborators to safeguard. His research found a negative relationship between implementing safeguards and guns being used in crimes.

"That's pretty significant," Bradford says. "The problem lies in where new guns are sent by manufacturers. We looked at the top manufacturers, which accounted for 97 percent of all gun sales in the United States. A lot of them are not safeguarding their distribution channels. They're not making sure the dealers are doing the things necessary so that their guns stay out of criminals' hands.

"When manufacturers implement safeguards in their distribution channels, their guns are not used as often in crime," he says. "If those marketing principles were put in place, dealers would be more discouraged from selling guns to the wrong people. This isn't about keeping law abiding citizens from having guns, simply insuring that the right process is being followed from the very beginning.

"If we can hold Hasbro accountable for choking hazards for children, it seems reasonable that we should be able to hold gun manufacturers accountable for their intermediaries who distribute to criminals," Bradford says. "Nobody seems to want the government involved in gun control and the government doesn't have enough feet on the ground for the job anyway, so why not get manufacturers involved? They should be held accountable."

Bradford teaches and does research on significant issues within the marketing system and its relationship to society.