FireFly Fleet To Be Launched In 2015 To Asteroids For Mining

Deep Space Industries announced  that it will send a fleet of asteroid-prospecting spacecraft out into the solar system to hunt for resources to accelerate space development to benefit Earth. These “FireFly” spacecraft utilize low-cost cubesat components and get discounted delivery to space by ride-sharing on the launch of larger communications satellites. 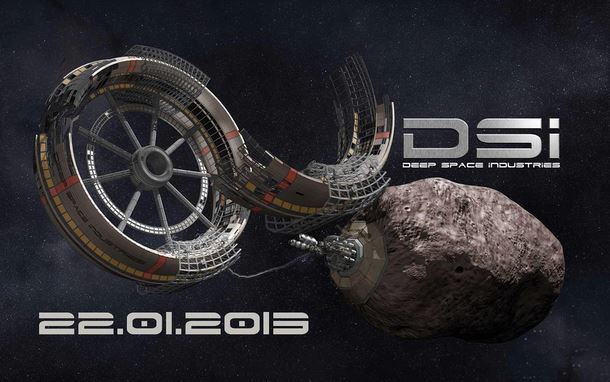 “This is the first commercial campaign to explore the small asteroids that pass by Earth,” said Deep Space Chairman Rick Tumlinson (who signed up the world’s first space tourist, led the team that took over the Mir space station, was a Founding Trustee of the X Prize, and Founded Orbital Outfitters, the world’s first commercial space suit company.) “Using low cost technologies, and combining the legacy of our space program with the innovation of today’s young high tech geniuses, we will do things that would have been impossible just a few years ago.”

FireFlies mass about 55 lbs. (25 kg) and will first be launched in 2015 on journeys of two to six months. Deep Space will be building a small fleet of the spacecraft using innovative miniature technologies, and working with NASA and other companies and groups to identify targets of opportunity.

“My smartphone has more computing power than they had on the Apollo moon missions,” said Tumlinson. “We can make amazing machines smaller, cheaper, and faster than ever before. Imagine a production line of FireFlies, cocked and loaded and ready to fly out to examine any object that gets near the Earth.”

Starting in 2016, Deep Space will begin launching 70-lb DragonFlies for round-trip visits that bring back samples. The DragonFly expeditions will take two to four years, depending on the target, and will return 60 to 150 lbs. Deep Space believes that combining science, prospecting and sponsorship will be a win/win for everyone, both lowering costs for exploration and enabling the public to join the adventure.

“The public will participate in FireFly and DragonFly missions via live feeds from Mission Control, online courses in asteroid mining sponsored by corporate marketers, and other innovative ways to open the doors wide,” said CEO David Gump. His earlier ventures include producing the first TV commercial shot on the International Space Station for RadioShack, co-founding Transformational Space Corp. (t/Space) and Astrobotic Technology Inc. “The Google Lunar X Prize, Unilever, and Red Bull each are spending tens of millions of dollars on space sponsorships, so the opportunity to sponsor a FireFly expedition into deep space will be enticing.”

Bringing back asteroid materials is only a step on the way to much bigger things for DSI. The company has a patent-pending technology called the MicroGravity Foundry to transform raw asteroid material into complex metal parts. The MicroGravity Foundry is a 3D printer that uses lasers to draw patterns in a nickel-charged gas medium, causing the nickel to be deposited in precise patterns.

“The MicroGravity Foundry is the first 3D printer that creates high-density high-strength metal components even in zero gravity,” said Stephen Covey, a co-Founder of DSI and inventor of the process. “Other metal 3D printers sinter powdered metal, which requires a gravity field and leaves a porous structure, or they use low-melting point metals with less strength.”

Senior leaders at NASA have been briefed on DSI’s technologies, which would make eventual crewed Mars expeditions less expensive through the use of asteroid-derived propellant. Missions would require fewer launches if the fuel to reach Mars were added in space from the volatiles in asteroids. Mars missions also would be safer with a MicroGravity Foundry on board to print replacements for broken parts, or to create brand new parts invented after the expedition was on its way to the Red Planet.

“Using resources harvested in space is the only way to afford permanent space development,” said Gump. “More than 900 new asteroids that pass near Earth are discovered every year. They can be like the Iron Range of Minnesota was for the Detroit car industry last century – a key resource located near where it was needed. In this case, metals and fuel from asteroids can expand the in-space industries of this century. That is our strategy.”

For example, a large market for DSI is producing fuel for communications satellites. Low-cost asteroid propellant delivered in orbit to commsats will extend their working lifetimes, with each extra month worth $5 million to $8 million per satellite. DSI has executed a non-disclosure agreement with an aerospace company to discuss collaboration on this opportunity.

In a decade, Deep Space will be harvesting asteroids for metals and other building materials, to construct large communications platforms to replace communications satellites, and later solar power stations to beam carbon-free energy to consumers on Earth. As DSI refines asteroids for in-space markets, it also will harvest platinum group metals for terrestrial uses, such as pollution control devices.

“Mining asteroids for rare metals alone isn’t economical, but makes senses if you already are processing them for volatiles and bulk metals for in-space uses,” said Mark Sonter, a member of the DSI Board of Directors. Mr. Sonter combines experience in planning, permitting, and management of large and complex terrestrial mining projects with funded research into the development of asteroid resources. “Turning asteroids into propellant and building materials damages no ecospheres since they are lifeless rocks left over from the formation of the solar system. Several hundred thousand that cross near Earth are available.”

Asteroids that fall to Earth are meteorites, and the Deep Space team includes Geoffrey Notkin, star of the international hit television series Meteorite Men about hunting for them. Notkin has unparalleled expertise in the diversity and market value of these elusive rocks, which are transformed by intense heat during their plunge to the surface. By contrast, the initial asteroid samples to be brought back by Deep Space will have their original in-space composition and structure preserved, creating exceedingly rare specimens for sale to the research and collectors markets.

Deep Space is looking for customers and sponsors who want to be a part of creating this new space economy. The company believes that taking the long view, while creating value, opportunities and products in the near term will allow it to become one of the economic engines that opens space to humanity. By getting under way and taking calculated risks, while developing basic industrial technologies, DSI will be well positioned over time to supply the basic needs of life in space. Taking the idea of socially minded companies to a new level, DSI is literally reaching for the stars.

“We will only be visitors in space until we learn how to live off the land there,” concluded Tumlinson. “This is the Deep Space mission – to find, harvest and process the resources of space to help save our civilization and support the expansion of humanity beyond the Earth – and doing so in a step by step manner that leverages off our space legacy to create an amazing and hopeful future for humanity. We are squarely focused on giving new generations the opportunity to change not only this world, but all the worlds of tomorrow.