On Jan. 23, 2013, at 9:55 a.m. EST, the sun erupted with an Earth-directed coronal mass ejection, or CME. Experimental NASA research models, based on observations from the Solar Terrestrial Relations Observatory (STEREO) and ESA/NASA’s Solar and Heliospheric Observatory, show that the CME left the sun at speeds of around 375 miles per second, which is a fairly typical speed for CMEs.

This movie shows two coronal mass ejections (CMEs) erupting from the sun on Jan. 23, 2013. The first was not directed at Earth; the second one is, but is not expected to have a strong impact. The movie was captured by the joint ESA/NASA mission the Solar and Heliospheric Observatory (SOHO), beginning at 7 p.m. EST on Jan. 22 and ending at 5:30 p.m. Jan. 23.

Not to be confused with a solar flare, a CME is a solar phenomenon that can send solar particles into space and reach Earth one to three days later.

The second of two coronal mass ejections (CMEs) on Jan. 23, 2013, is seen erupting in the top of the picture, away from the sun, which is obscured by the disk in the center. The Solar and Heliospheric Observatory captured this image, called a coronagraph: the bright light of the sun itself is blocked to provide a better view of the sun's atmosphere, the corona. This CME left the sun at speeds of 375 miles per second (1.35 million mph), which is almost 10 times lower than the very fastest CMEs. 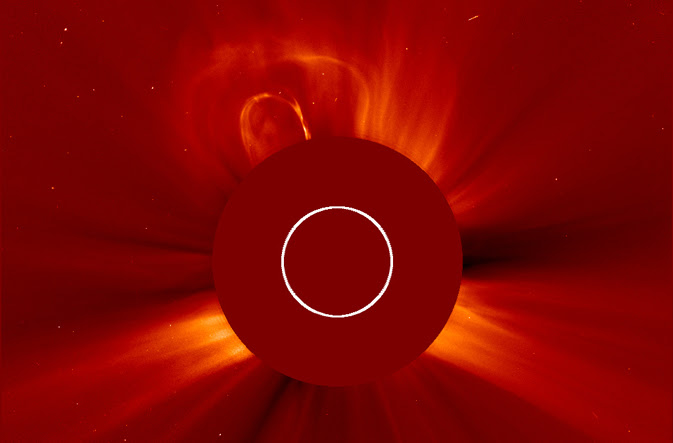 Earth-directed CMEs can cause a space weather phenomenon called a geomagnetic storm, which occurs when they connect with the outside of the Earth's magnetic envelope, the magnetosphere, for an extended period of time. In the past, CMEs of this speed have not caused substantial geomagnetic storms. They sometimes cause auroras near the poles but are unlikely to affect electrical systems on Earth or interfere with GPS or satellite-based communications systems.

A slightly slower CME that was not Earth-directed, also erupted earlier in the day.

The first of two coronal mass ejections (CMEs) on Jan. 23, 2013, can be seen erupting in the lower left portion of this image, from the Solar and Heliospheric Observatory. This CME was not Earth-directed. This image is what's known as a coronagraph, in which the bright light of the sun itself is blocked in order to better see the sun's atmosphere, the corona. 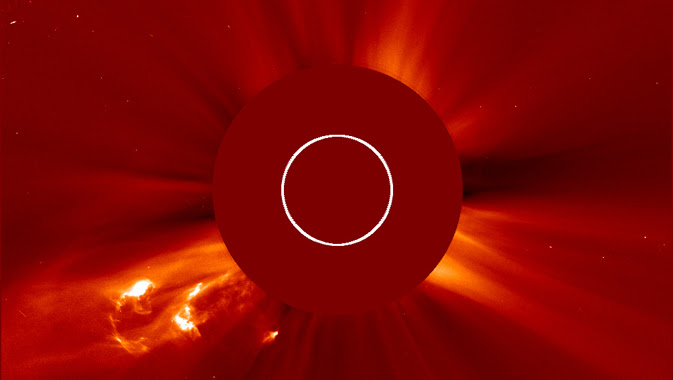 Updates will be provided if needed.

The Sun is a magnetic variable star at the center of our solar system that drives the space environment of the planets, including the Earth. The distance of the Sun from the Earth is approximately 93 million miles. At this distance, light travels from the Sun to Earth in about 8 minutes and 19 seconds. The Sun has a diameter of about 865,000 miles, about 109 times that of Earth. Its mass, about 330,000 times that of Earth, accounts for about 99.86% of the total mass of the Solar System. About three quarters of the Sun's mass consists of hydrogen, while the rest is mostly helium. Less than 2% consists of heavier elements, including oxygen, carbon, neon, iron, and others. The Sun is neither a solid nor a gas but is actually plasma. This plasma is tenuous and gaseous near the surface, but gets denser down towards the Sun's fusion core.

The Sun, as shown by the illustration at right, can be divided into six layers. From the center out, the layers of the Sun are as follows: the solar interior composed of the core (which occupies the innermost quarter or so of the Sun's radius), the radiative zone, and the convective zone, then there is the visible surface known as the photosphere, the chromosphere, and finally the outermost layer, the corona.  The energy produced through fusion in the Sun's core powers the Sun and produces all of the heat and light that we receive here on Earth.

The Sun, like most stars, is a main sequence star, and thus generates its energy by nuclear fusion of hydrogen nuclei into helium. In its core, the Sun fuses 430–600 million tons of hydrogen each second. The Sun's hot corona continuously expands in space creating the solar wind, a stream of charged particles that extends to the heliopause at roughly 100 astronomical units. The bubble in the interstellar medium formed by the solar wind, the heliosphere, is the largest continuous structure in the Solar System.

Stars like our Sun shine for nine to ten billion years. The Sun is about 4.5 billion years old, judging by the age of moon rocks. Based on this information, current astrophysical theory predicts that the Sun will become a red giant in about five billion (5,000,000,000) years.

What is a CME?

The outer solar atmosphere, the corona, is structured by strong magnetic fields. Where these fields are closed, often above sunspot groups, the confined solar atmosphere can suddenly and violently release bubbles of gas and magnetic fields called coronal mass ejections. A large CME can contain a billion tons of matter that can be accelerated to several million miles per hour in a spectacular explosion. Solar material streams out through the interplanetary medium, impacting any planet or spacecraft in its path. CMEs are sometimes associated with flares but can occur independently.