A nearby short duration gamma-ray burst may be the cause of an intense blast of high-energy radiation that hit the Earth in the 8th century, according to new research led by astronomers Valeri Hambaryan and Ralph Neuhӓuser. The two scientists, based at the Astrophysics Institute of the University of Jena in Germany, publish their results in the journal Monthly Notices of the Royal Astronomical Society.

An artist's impression of the merger of two neutron stars. Short duration gamma-ray bursts are thought to be caused by the merger of some combination of white dwarfs, neutron stars or black holes. Theory suggests that they are short lived as there is little dust and gas to fuel an 'afterglow'.

Credit: Part of an image created by NASA / Dana Berry.

In 2012 scientist Fusa Miyake announced the detection of high levels of the isotope Carbon-14 and Beryllium-10 in tree rings formed in 775 CE, suggesting that a burst of radiation struck the Earth in the year 774 or 775. Carbon-14 and Beryllium-10 form when radiation from space collides with nitrogen atoms, which then decay to these heavier forms of carbon and beryllium. The earlier research ruled out the nearby explosion of a massive star (a supernova) as nothing was recorded in observations at the time and no remnant has been found.

Prof. Miyake also considered whether a solar flare could have been responsible, but these are not powerful enough to cause the observed excess of carbon-14. Large flares are likely to be accompanied by ejections of material from the Sun's corona, leading to vivid displays of the northern and southern lights (aurorae), but again no historical records suggest these took place.

Ground based Observation by W.M. Keck Observatory: The location of the gamma-ray burst as determined by the Swift X-Ray Telescope (XRT) is shown by the blue circle on this infra-red image of the sky from the W.M. Keck telescope. The burst went off in the outskirts of this huge galaxy 2.6 billion lights years away. The location outside, but near, the galaxy fits perfectly with the theory that short bursts are due to black hole formation when orbiting neutron stars collide. The gamma-ray source has not yet been securely identified and scientists are most interested in the 4 objects within Swift's X-ray telescopes error circle. 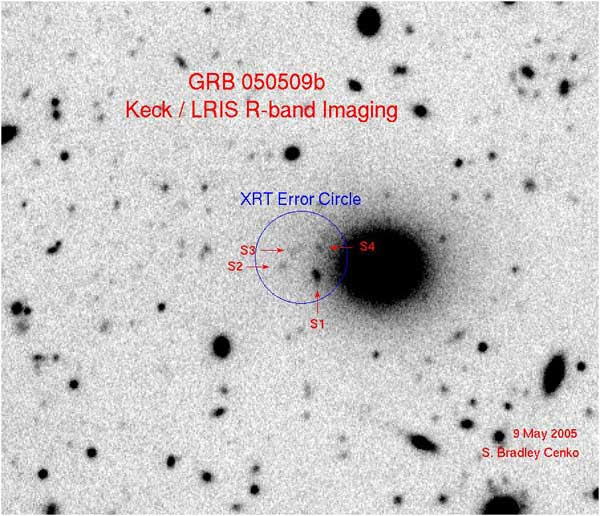 Following this announcement, researchers pointed to an entry in the Anglo-Saxon Chronicle that describes a 'red crucifix' seen after sunset and suggested this might be a supernova. But this dates from 776, too late to account for the carbon-14 data and still does not explain why no remnant has been detected.

Drs. Hambaryan and Neuhӓuser have another explanation, consistent with both the carbon-14 measurements and the absence of any recorded events in the sky. They suggest that two compact stellar remnants, i.e. black holes, neutron stars or white dwarfs, collided and merged together. When this happens, some energy is released in the form of gamma rays, the most energetic part of the electromagnetic spectrum that includes visible light.

In these mergers, the burst of gamma rays is intense but short, typically lasting less than two seconds. These events are seen in other galaxies many times each year but, in contrast to long duration bursts, without any corresponding visible light. If this is the explanation for the 774 / 775 radiation burst, then the merging stars could not be closer than about 3000 light years, or it would have led to the extinction of some terrestrial life. Based on the carbon-14 measurements, Hambaryan and Neuhӓuser believe the gamma ray burst originated in a system between 3000 and 12000 light years from the Sun.

If they are right, then this would explain why no records exist of a supernova or auroral display. Other work suggests that some visible light is emitted during short gamma-ray bursts that could be seen in a relatively nearby event. This might only be seen for a few days and be easily missed, but nonetheless it may be worthwhile for historians to look again through contemporary texts.

Astronomers could also look for the merged object, a 1200 year old black hole or neutron star 3000-12000 light years from the Sun but without the characteristic gas and dust of a supernova remnant.

Dr Neuhӓuser comments: "If the gamma ray burst had been much closer to the Earth it would have caused significant harm to the biosphere. But even thousands of light years away, a similar event today could cause havoc with the sensitive electronic systems that advanced societies have come to depend on. The challenge now is to establish how rare such Carbon-14 spikes are i.e. how often such radiation bursts hit the Earth. In the last 3000 years, the maximum age of trees alive today, only one such event appears to have taken place."