The ring-like swirls of dust filling the Andromeda galaxy stand out colorfully in this new image from the Herschel Space Observatory, a European Space Agency mission with important NASA participation.

The glow seen here comes from the longer-wavelength, or far, end of the infrared spectrum, giving astronomers the chance to identify the very coldest dust in our galactic neighbor. These light wavelengths span from 250 to 500 microns, which are a quarter to half of a millimeter in size. Herschel's ability to detect the light allows astronomers to see clouds of dust at temperatures of only a few tens of degrees above absolute zero. These clouds are dark and opaque at shorter wavelengths. The Herschel view also highlights spokes of dust between the concentric rings.

The colors in this image have been enhanced to make them easier to see, but they do reflect real variations in the data. The very coldest clouds are brightest in the longest wavelengths, and colored red here, while the warmer ones take on a bluish tinge.

Two new eye-catching views from the Herschel space observatory are fit for a princess. They show the elegant spiral galaxy Andromeda, named after the mythical Greek princess known for her beauty.

The Andromeda galaxy, also known as Messier 31, lies 2 million light-years away, and is the closest large galaxy to our own Milky Way. It is estimated to have up to one trillion stars, whereas the Milky Way contains hundreds of billions. Recent evidence suggests Andromeda's overall mass may in fact be less than the mass of the Milky Way, when dark matter is included.

Herschel, a European Space Agency mission with important NASA contributions, sees the longer-wavelength infrared light from the galaxy, revealing its rings of cool dust. Some of this dust is the very coldest in the galaxy -- only a few tens of degrees above absolute zero.

In both views, warmer dust is highlighted in the central regions by different colors. New stars are being born in this central, crowded hub, and throughout the galaxy's rings in dusty knots. Spokes of dust can also be seen between the rings.

In this new view of the Andromeda galaxy from the Herschel space observatory, cool lanes of forming stars are revealed in the finest detail yet. Herschel is a European Space Agency mission with important NASA participation.

Andromeda, also known as M31, is the nearest major galaxy to our own Milky Way at a distance of 2.5 million light-years, making it an ideal natural laboratory to study star formation and galaxy evolution.

Sensitive to the far-infrared light from cool dust mixed in with the gas, Herschel seeks out clouds of gas where stars are born. The new image reveals some of the very coldest dust in the galaxy – only a few tens of degrees above absolute zero – colored red in this image.

By comparison, warmer regions such as the densely populated central bulge, home to older stars, take on a blue appearance.

Intricate structure is present throughout the 200,000-light-year-wide galaxy with star-formation zones organized in spiral arms and at least five concentric rings, interspersed with dark gaps where star formation is absent.

Andromeda is host to several hundred billion stars. This new image of it clearly shows that many more stars will soon to spark into existence. 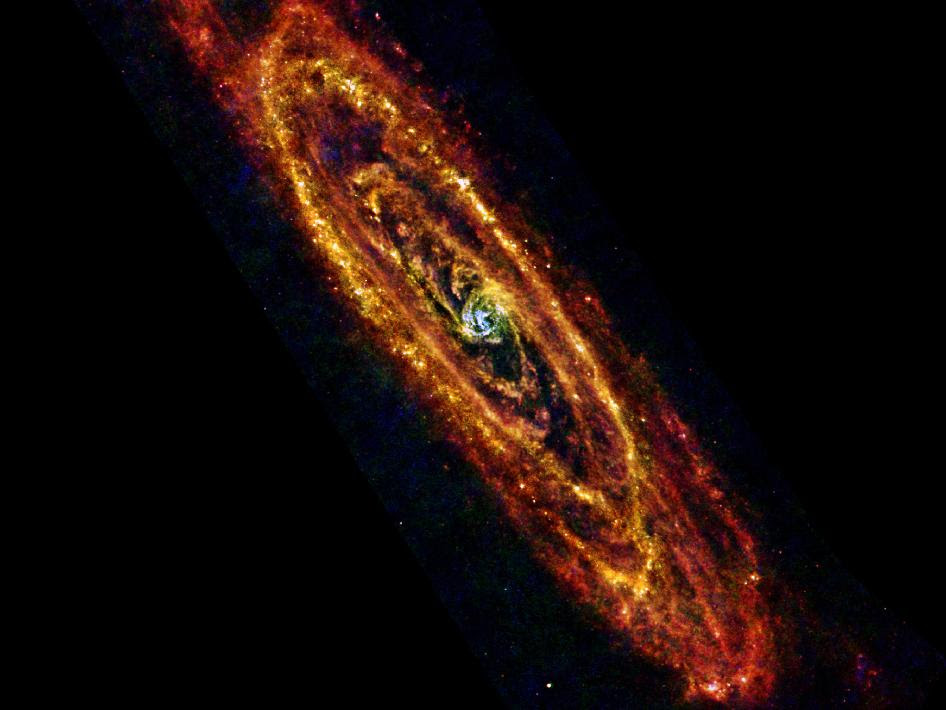 One view, seen at http://www.nasa.gov/mission_pages/herschel/multimedia/pia16682.html , is a mosaic of data from Herschel's Photodetecting Array Camera and Spectrometer (PACS) and spectral and photometric imaging receiver (SPIRE).

The second view, seen at http://www.nasa.gov/mission_pages/herschel/multimedia/pia16681.html , shows data from only the SPIRE instrument, which captures the longest of wavelengths detectable by Herschel.