Even if you live more than 1,000 miles from the nearest large city, it could be affecting your weather.

In a new study that shows the extent to which human activities are influencing the atmosphere, scientists have concluded that the heat generated by everyday activities in metropolitan areas alters the character of the jet stream and other major atmospheric systems. This affects temperatures across thousands of miles, significantly warming some areas and cooling others, according to the study in Nature Climate Change.

This composite image shows a global view of Earth at night, compiled from over 400 satellite images. New research shows that major cities, which generally correspond with the nighttime lights in this image, can have a far-reaching impact on temperatures. 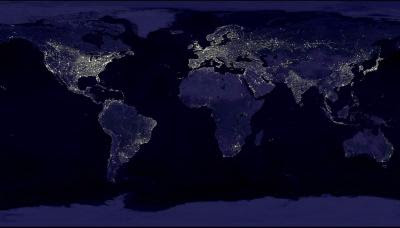 The extra "waste heat" generated from buildings, cars, and other sources in major Northern Hemisphere urban areas causes winter warming across large areas of northern North American and northern Asia. Temperatures in some remote areas increase by as much as 1 degree Celsius (1.8 degrees Fahrenheit), according to the research by scientists at the Scripps Institution of Oceanography, University of California, San Diego; Florida State University; and the National Center for Atmospheric Research.

At the same time, the changes to atmospheric circulation caused by the waste heat cool areas of Europe by as much as 1 degree C (1.8 degrees F), with much of the temperature decrease occurring in the fall.

The net effect on global mean temperatures is nearly negligible—an average increase worldwide of just 0.01 degrees C (about 0.02 degrees F). This is because the total human-produced waste heat is only about 0.3 percent of the heat transported across higher latitudes by atmospheric and oceanic circulations.

However, the noticeable impact on regional temperatures may explain why some regions are experiencing more winter warming than projected by climate computer models, the researchers conclude. They suggest that models be adjusted to take the influence of waste heat into account.

"The burning of fossil fuel not only emits greenhouse gases but also directly affects temperatures because of heat that escapes from sources like buildings and cars," says NCAR scientist Aixue Hu, a co-author of the study. "Although much of this waste heat is concentrated in large cities, it can change atmospheric patterns in a way that raises or lowers temperatures across considerable distances."

The researchers stressed that the effect of waste heat is distinct from the so-called urban heat island effect. Such islands are mainly a function of the heat collected and re-radiated by pavement, buildings, and other urban features, whereas the new study examines the heat produced directly through transportation, heating and cooling units, and other activities.

The study, "Energy consumption and the unexplained winter warming over northern Asia and North America" appears this Sunday. It was funded by the National Science Foundation, NCAR's sponsor, as well as the Department of Energy and the National Oceanic and Atmospheric Administration.

Hu, along with lead author Guang Zhang of Scripps and Ming Cai of Florida State University, analyzed the energy consumption – from heating buildings to powering vehicles – that generates waste heat release. The world's total energy consumption in 2006 was equivalent to a constant-use rate of 16 terawatts (one terawatt, or TW, equals 1 trillion watts). Of that, an average rate of 6.7 TW was consumed in 86 metropolitan areas in the Northern Hemisphere.

Using a computer model of the atmosphere, the authors found that the influence of this waste heat can widen the jet stream.

"What we found is that energy use from multiple urban areas collectively can warm the atmosphere remotely, thousands of miles away from the energy consumption regions," Zhang says. "This is accomplished through atmospheric circulation change."

The release of waste heat is different from energy that is naturally distributed in the atmosphere, the researchers noted. The largest source of heat, solar energy, warms Earth's surface and atmospheric circulations redistribute that energy from one region to another. Human energy consumption distributes energy that had lain dormant and sequestered for millions of years, mostly in the form of oil or coal.

Though the amount of human-generated energy is a small portion of that transported by nature, it is highly concentrated in urban areas. In the Northern Hemisphere, many of those urban areas lie directly under major atmospheric troughs and jet streams.

"The world's most populated and energy-intensive metropolitan areas are along the east and west coasts of the North American and Eurasian continents, underneath the most prominent atmospheric circulation troughs and ridges," Cai says. "The release of this concentrated waste energy causes the noticeable interruption to the normal atmospheric circulation systems above, leading to remote surface temperature changes far away from the regions where waste heat is generated."