You might expect dung beetles to keep their "noses to the ground," but they are actually incredibly attuned to the sky. A report published online on January 24 in Current Biology, a Cell Press publication, shows that even on the darkest of nights, African ball-rolling insects are guided by the soft glow of the Milky Way.

The insect with a tiny brain and minimal computing power has become the first animal proven to use the Milky Way for orientation. Scientists from South Africa and Sweden have published findings showing the link between dung beetles and the spray of stars which comprises our galaxy.

Although their eyes are too weak to distinguish individual constellations, dung beetles use the gradient of light to dark provided by the Milky Way to ensure they keep rolling their balls in a straight line and don't circle back to competitors at the dung pile.

"The dung beetles don't care which direction they're going in; they just need to get away from the bun fight at the poo pile," said Professor Marcus Byrne from Wits University. 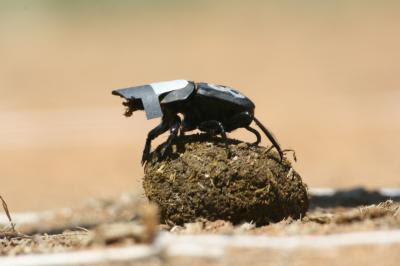 Byrne and his team previously proved that dung beetles use the sun, the moon and polarised light for orientation. In their experiments, they gave the beetles "caps" which blocked light from reaching their eyes. The team also discovered that the beetles climb on top of their dung balls to perform an orientation "dance" during which they locate light sources to use for orientation.

While birds and humans are known to navigate by the stars, the discovery is the first convincing evidence for such abilities in insects, the researchers say. It is also the first known example of any animal getting around by the Milky Way as opposed to the stars.

You might expect dung beetles to keep their “noses to the ground,” but they are actually incredibly attuned to the sky. A report published online on Jan. 24 in Current Biology, a Cell Press publication, shows that even on the darkest of nights, African ball-rolling insects are guided by the soft glow of the Milky Way. "Even on clear, moonless nights, many dung beetles still manage to orientate along straight paths," said Marie Dacke of Lund University in Sweden. "This led us to suspect that the beetles exploit the starry sky for orientation—a feat that had, to our knowledge, never before been demonstrated in an insect."

Dacke and her colleagues found that dung beetles do transport their dung balls along straight paths under a starlit sky but lose the ability under overcast conditions. In a planetarium, the beetles stayed on track equally well under a full starlit sky and one showing only the diffuse streak of the Milky Way.

That makes sense, the researchers explain, because the night sky is sprinkled with stars, but the vast majority of those stars should be too dim for the beetles' tiny compound eyes to see.

The findings raise the possibility that other nocturnal insects might also use stars to guide them at night. On the other hand, dung beetles are pretty special. Upon locating a suitable dung pile, the beetles shape a piece of dung into a ball and roll it away in a straight line. That behavior guarantees them that they will not return to the dung pile, where they risk having their ball stolen by other beetles.

"Dung beetles are known to use celestial compass cues such as the sun, the moon, and the pattern of polarized light formed around these light sources to roll their balls of dung along straight paths," Dacke said. "Celestial compass cues dominate straight-line orientation in dung beetles so strongly that, to our knowledge, this is the only animal with a visual compass system that ignores the extra orientation precision that landmarks can offer."

Now, further experiments, conducted under the simulated night sky of the Wits Planetarium, have shown that the beetles also use the Mohawk of the Milky Way – giving new meaning to dancing with the stars!

"We were sitting out in Vryburg (conducting experiments) and the Milky Way was this massive light source. We thought they have to be able to use this – they just have to!" said Byrne.

Not all light sources are equally useful landmarks for a dung beetle. A moth keeping a constant angle between itself and a candle flame will move in a circle around the flame. However, a celestial body is too far away to change position relative to a dung beetle as it rolls its ball, with the result that the beetle keeps travelling in a straight line.

The scientists suspect the beetles have a hierarchy of preference when it comes to available light sources. So if the moon and the Milky Way are visible at the same time, the beetles probably use one rather than the other.

A few other animals have been proven to use stars for orientation, but the dung beetle is the first animal proven to use the galaxy.

Contacts and sources:
Kanina Foss
University of the Witwatersrand