As Above, So Below: They Hunt, They Kill, They Cheat, Humans And Microbes Not So Different


Cheating is a behavior not limited to humans, animals and plants. Even microscopically small, single-celled algae do it, a team of University of Arizona researchers has discovered

Shimmering golden under a microscope, Prymnesium algae are seen swarming and devouring a green alga. A human hair would cover most of the swarm. 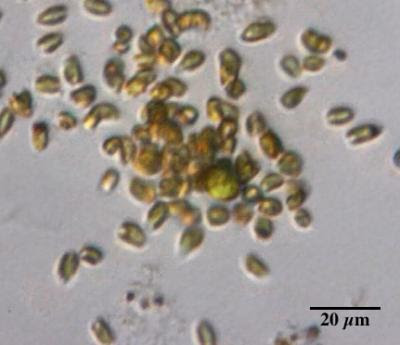 Humans do it, chimpanzees do it, cuckoos do it – cheating to score a free ride is a well-documented behavior by many animals, even plants. But microscopically small, single-celled algae? Yes, they do it too, biologists with the University of Arizona's department of ecology and evolutionary biology have discovered.

"There are cheaters out there that we didn't know of," said William Driscoll, lead author of a research report on the topic who studied an environmentally devastating toxic alga that is invading U.S. waters as part of his doctoral research in the lab of Jeremiah Hackett, an assistant professor of ecology and evolutionary biology.

Driscoll isolated several strains of the species, Prymnesium parvum, and noticed that some grew more quickly and do not produce any of the toxins that protect the algae against competition from other species of algae.

"When those 'cheaters' are cultured with their toxic counterparts, they can still benefit from the toxins produced by their cooperative neighbors – they are true 'free riders,'" Driscoll explained.

The study, published in the journal Evolution, adds to the emerging view that microbes often have active social lives. Future research into the social side of toxic algae could open up new approaches to control or counteract toxic algal blooms, which can pose serious threats to human health and wipe out local fisheries, for example.

Prymnesium belong to a group of algae known as golden algae, so named for their accessory pigments, which give the cells a golden sheen. This toxic species lives mostly in oceans and only recently has invaded freshwater environments. Its distant relatives include the equally microscopic diatoms, which make up a large part of phytoplankton, and giant kelp.

The algae produce toxins that are deadly to fish but so far have not been shown to threaten the health of humans or cattle. Many scientists believe the toxin arose as a chemical weapon to wipe out other algae and other organisms competing for the same nutrients and sunlight on which the algae depend. The discovery of cheaters that don't bother to produce toxin, however, throws a wrench into this scenario.

"We are trying to understand the ecological side in these algae," Driscoll said.

This shows William Driscoll with a vial of algae (not the cheating kind) in the lab. 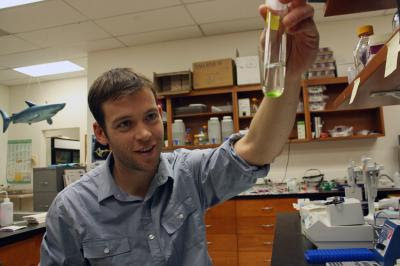 "If you're a single cell, regardless of whether you make a toxin or not, you're just drifting through the water, and everything is drifting with you," Driscoll explained. "Producing toxins only makes sense if the entire population does it. Any given individual cell won't get any benefit from the chemicals it makes because they immediately diffuse away. It's a bit like schooling behavior in fish: A single fish can't confuse a predator; you need everyone else do the same thing." For that reason, he explained, the cheaters should have an immediate advantage over their "honest" peers because they can invest the energy and resources they save into making more offspring.

"Theory tells us cooperation should break down in these circumstances. If you are secreting a toxin and it's beneficial to your species, then everybody gets access to that benefit. In a well-mixed population where there is no group structure, natural selection should favor selfishness, and the cheaters should take over." But for some reason, they don't. An alternative explanation for toxicity becomes clear when toxic cells are observed alongside their competition under a microscope.

"They attack other cells," he said. "Using their two flagella, they swim up to the prey and latch on to it. Sometimes a struggle takes place, and more cells swim up to the scene, surround their victim and release more toxin, and then they eat it."

"These toxins might have evolved less as a means to keep competitors away and more like a rattlesnake venom. The algae might use it to stun or immobilize prey." Driscoll and his co-workers isolated the toxic and the non-toxic strains side by side from the same water sample, taken from a late bloom as the bloom started to crash.

"When times are good and there are plenty of nutrients in the water, the algae use photosynthesis to gain energy from sunlight, but when nutrients become sparse, they attack and become toxic," Driscoll said. "That's when they start swimming around looking for prey. They are a little bit like carnivorous plants in that way – like a Venus fly trap."

The group observed that as soon as nutrients become scarce, the toxic population ceases to grow, but the cheaters keep multiplying.

This video shows Prymnesium parvum algae ganging up on the marine green alga, Dunaliella tertiolecta. They first bat it around, then more and morePrymnesium cells join the swarm and subdue their victim. The video is at approximately real time speed.
Credit: William Driscoll

Driscoll and his team think the cheating behavior could be an adaptation to the algae bloom life style.

"During a bloom you have killed off all the prey or a huge amount of it, so why produce toxins and go looking for something that isn't there? It might be better to just keep growing and not even try to bother to keep looking for prey because it's gone."

Driscoll said the research illustrates how little is known about the ecology of microbes.

"We're just starting to understand what the mechanisms are that maintain cooperation in microbes. The theory is heavily slanted toward multicellular organisms. Only recently have people started to think about microbes cooperating."

To better understand the genes and biochemical pathways that control how the algae make their toxins, the group in Hackett's lab is investigating which genes are active in the toxic compared to the non-toxic strains.

"We are finding a number of stress-related genes are regulated differently in the cheaters," Driscoll said. "A lot of the other genes have not been studied before, especially those most likely involved in toxin production."

"The problem is that nothing close to these algae has had its genome sequenced, so they're pretty mysterious. Many of the genes we have sequenced are novel, so understanding their function is a big part of the challenge."

Unraveling the molecular mechanisms behind all this chemical warfare, cheating behavior and maximizing growth could potentially lead to new applications, the researchers speculate, albeit cautiously.

Driscoll explained the cheating trait might be an Achilles heel that could be exploited to curb algal blooms.

"We are ultimately interested in disrupting the competitive abilities of these bloom-forming populations. While this research is just scratching the surface, understanding how natural selection may work over the course of a bloom can provide a deeper understanding of the traits that are most important to the success of this species."

In addition, the cheaters' tendency to keep growing when their toxic peers no longer can is in some ways reminiscent of cancer cells.

According to Driscoll, one way to think about cancer is that cancerous cells have an immediate advantage over their non-cancerous, well-behaved neighbors. But this advantage, if unchecked, is very shortsighted because it will interfere with the basic functioning of the multicellular organism of which they are all a part.

"What we may be seeing in our algae is a – far less extreme – version of a similar story, because a short-term advantage to not producing toxins may interfere with the long-term competitive ability of the population."

Contacts and sources:
Daniel Stolte
University of Arizona
on January 18, 2013