Carnegie Mellon University's Shawn Kelly has received a four-year, $1.1 million grant from the U.S. Department of Veterans Affairs to develop a retinal prosthesis for restoring functional vision to the blind.

"This is wonderful support for work so critical to millions of Americans battling vision issues like macular degeneration," said Kelly, a senior systems scientist at CMU's Institute for Complex Engineered Systems (ICES).

Each year, more than 21 million Americans are diagnosed with some form of eye disease that either clouds vision or results in loss of vision in the center of the visual field (macula) because of damage to the retina. 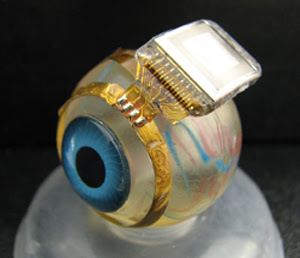 For more than a decade, Kelly has worked to develop tools that could restore useful vision to patients with macular degeneration, which usually affects older adults and results in loss of sight.

"My group has created a micro-fabricated thin film that is inserted behind the retina of the human eye. From this thin plastic film, the width of an eyelash, flexible electrodes send stimulating current signals to retinal nerves. A miniature microchip located in a titanium package generates these stimulating currents. That package is attached to the patient's eye, and receives image signals from specially designed glasses worn by a visually impaired patient. My device works very much like a camera, replacing the function of the rods and cones of the human eye," Kelly said.

To the novice, the eye operates on the same principle as the camera - the only machine directly modeled on a sense organ. The eye, however, takes two simultaneous pictures, one in black and white, the other in color. Cells in the retina, called rods, register black and white only; they are so sensitive they can detect light as faint as 100-trillionth of a watt. Other retinal cells, the cones, are affected by color and are most abundant at the fovea, the place where the image falls when the eye focuses. The blind spot, lacking both rods and cones, is where the optic nerve leaves the retina, carrying the pictures for the brain to see.

"My tools are designed to help individuals struggling with blindness, and to ultimately help injured veterans with head and eye wounds recover some peripheral vision," Kelly said.

Kelly earned his Ph.D. in electrical engineering from the Massachusetts Institute of Technology. Prior to coming to CMU in 2011, he worked at the Boston Veterans Hospital and was a visiting scientist at MIT. In his spare time, he enjoys playing ice hockey and crafting silver jewelry.


Shawn Kelly has created a micro-fabricated thin film that is inserted behind the retina of the human eye. From this thin plastic film, the width of an eyelash, flexible electrodes send stimulating current signals to retinal nerves helping to restore vision in individuals suffering from diseases such as macular degeneration.