Whitney, Gangnam And Sandy Top The Top Ten Trends For 2012 According To Google 1.2 Trillion Search

As 2012 comes to a close, it's time for Google's 12th annual Year-End Zeitgeist—an in-depth look at the "spirit of the times" as seen through the billions of searches on Google over the past year.

On Google's 2012 Zeitgeist website, you can explore the most popular and hottest trending search terms from around the world. This year’s site is Google's most global to date, with a total of 838 lists from 55 countries. Google also added a number of new features, including an interactive map that shows where and when some of the hottest terms spiked around the world, and a Google Zeitgeist Android app coming out later today (with an iOS version coming soon too).

For a round-the-globe tour through 2012, take a look at this Google video
So what kinds of things were top of mind this year? While there are perennial themes—“what is love?” topped the list in 10 countries—it’s the unusual and surprising that caught our attention in 2012.

Global superstar Whitney Houston topped many countries’ lists as well as three of Google's overall trending lists—her unexpected death surprising fans around the world. From Korea, YouTube sensation PSY’s “Gangnam Style” signature dance took the world by storm, landing him the #1 spot in many countries and making his song the second most trending query of 2012. (PSY’s video became the #1 most watched in YouTube history—stay tuned for YouTube’s Rewind for more.) 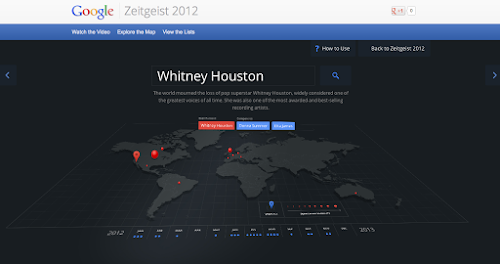 Then there was the superhuman. Austrian skydiver Felix Baumgartner’s epic free fall jump made him the #6 globally trending person of the year, while the 2012 Olympics and its various athletes made it into almost every country’s top trends. And NBA player Jeremy Lin also rose on the charts this year, making him the #1 trending athlete globally.

People researched a breadth of other topics, too. Web users took a serious interest in threats to the open Internet, with proposals like SOPA and ACTA both finding their way to the top of many countries’ lists. The U.S. elections brought attention to the candidates and issues, not least