Waring About Geo-Engineering Against Climate Change


Seeding the oceans with iron may not address carbon emissions

Numerous geo-engineering schemes have been suggested as possible ways to reduce levels of the greenhouse gas carbon dioxide in the atmosphere and so reduce the risk of global warming and climate change. One such technology involves dispersing large quantities of iron salts in the oceans to fertilize otherwise barren parts of the sea and trigger the growth of algal blooms and other photosynthesizing marine life. Photosynthesis requires carbon dioxide as its feedstock and when the algae die they will sink to the bottom of the sea taking the locked in carbon with them.

Unfortunately, present plans for seeding the oceans with iron fail to take into account several factors that could scupper those plans, according to Daniel Harrison of the University of Sydney Institute of Marine Science, NSW. Writing in the International Journal of Global Warming, Harrison has calculated the impact of iron seeding schemes in terms of the efficiency of spreading the iron, the impact it will most likely have on algal growth the tonnage of carbon dioxide per square kilometer of ocean surface that will be actually absorbed compared to the hypothetical figures suggested by advocates of the approach.


"If society wishes to limit the contribution of anthropogenic carbon dioxide to global warming then the need to find economical methods of carbon dioxide sequestration is now urgent," Harrison's new calculations take into account not only the carbon dioxide that will be certainly be sequestered permanently to the deep ocean but also subtracts the many losses due to ventilation, nutrient stealing, greenhouse gas production and the carbon dioxide emitted by the burning of fossil fuels to produce the iron salts and to power their transportation and distribution at sea.

His calculations suggest that on average, a single ocean iron fertilization will result in a net sequestration of just 10 tonnes of carbon per square kilometer sequestered for a century or more at a cost of almost US$500 per tonne of carbon dioxide. "Previous estimates of cost fail to recognize the economic challenge of distributing low concentrations of iron over large areas of the ocean surface and the subsequent loss processes that result in only a small net storage of carbon per square kilometer fertilized," says Harrison.

Others have addressed the maximum possible contribution by modeling and the generally accepted figure is around 1 billion tonnes of carbon, but those calculations do not take into account the losses discussed by Harrison. The real limit would be when the macro-nutrients are exhausted, what then is the flux of macro-nutrients into the iron limited regions per year? "Under ideal conditions the cost could be lowered and the efficiency increased but the availability of ideal conditions will be small," says Harrison.

About 70% of the world's surface is covered in oceans, and the upper part of these (where light can penetrate) is inhabited by algae. In some oceans, the growth and reproduction of these algae is limited by the amount of iron in the seawater. Iron is a vital micronutrient for phytoplankton growth and photosynthesis that has historically been delivered to the pelagic sea by dust storms from arid lands. This Aeolian dust contains 3–5% iron and its deposition has fallen nearly 25% in recent decades.

Therefore small amounts of iron (measured by mass parts per trillion) in "desolate" HNLC zones can trigger large phytoplankton blooms. Recent marine trials suggest that one kilogram of fine iron particles may generate well over 100,000 kilograms of plankton biomass. The size of the iron particles is critical, however, and particles of 0.5–1 micrometer or less seem to be ideal both in terms of sink rate and bioavailability. Particles this small are not only easier for cyanobacteria and other phytoplankton to incorporate, the churning of surface waters keeps them in the euphotic or sunlit biologically active depths without sinking for long periods of time. 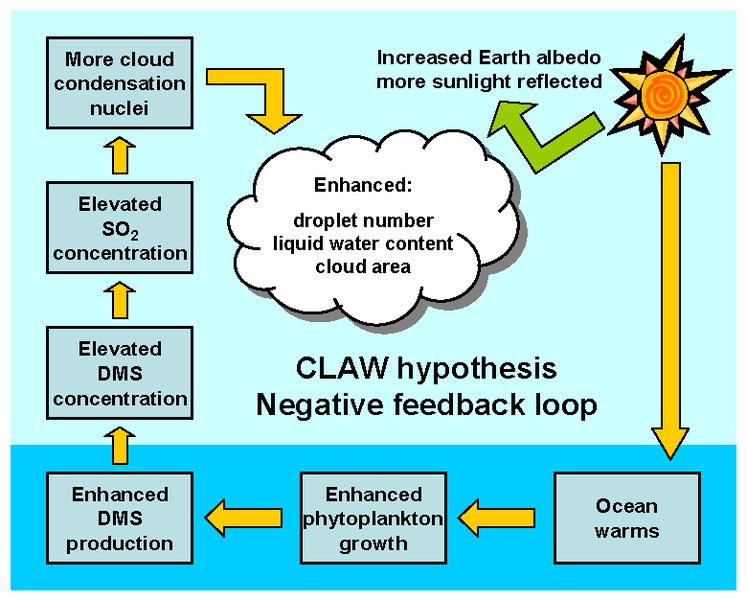 Previous instances of biological carbon sequestration have triggered major climatic changes, such as the Azolla event. Plankton that generate calcium or silicon carbonate skeletons, such as diatoms, coccolithophores and foraminifera, account for most direct carbon sequestration. When these organisms die their carbonate skeletons sink relatively quickly and form a major component of the carbon-rich deep sea precipitation known as marine snow.

Marine snow also includes fish fecal pellets and other organic detritus, and can be seen steadily falling thousands of meters below active plankton blooms.[40] Of the carbon-rich biomass generated by plankton blooms, half (or more) is generally consumed by grazing organisms (zooplankton, krill, small fish, etc.) but 20 to 30% sinks below 200 meters (660 ft) into the colder water strata below the thermocline.[citation needed] Much of this fixed carbon continues falling into the abyss, but a substantial percentage is redissolved and remineralized. At this depth, however, this carbon is now suspended in deep currents and effectively isolated from the atmosphere for centuries. (The surface to benthic cycling time for the ocean is approximately 4,000 years.)

Citation: "A method for estimating the cost to sequester carbon dioxide by delivering iron to the ocean" in Int. J. of Global Warming, 2013, in press