“Super Storm Sandy” had to compete with the most extensive drought in more than half a century and one of the worst heat waves since the 1930s dust bowl but, as the impacts from Sandy kept mounting in its aftermath, this remarkable storm climbed up to the number one spot in Weatherwise magazine’s annual tally of the top 10 weather events of the year.

Officially known as “post-tropical cyclone Sandy,” “this storm was amazing in so many ways that it had to rank as the number one event of the year,” according to the compiler of the top 10 lists, meteorologist and Weatherwise Contributing Editor, Doug Le Comte. There was the extraordinary upper-air weather pattern that caused the hurricane to morph into a nor’easter before landfall in New Jersey, the enormous size of the storm and resulting wind fetch that swamped the Jersey and New York coasts with the 8- to 14-foot wall of water, the timing and date (October 29) that resulted in the storm surge combining with an unusually high tide, the landfall near one of the most populous areas of the world, direct damage exceeding $40 billion that made Sandy one of the three most expensive storms to ever strike the United States, the 132 deaths blamed on the storm, the record snowfall in the Appalachians…this list goes on and on. 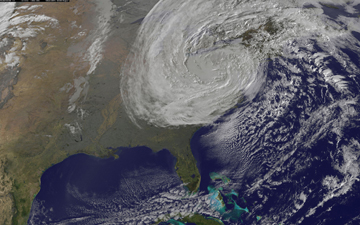 But let’s not slight the other big story of the year, the heat and drought that cut the U.S. corn crop by 28% and, according to Weatherwise estimates, caused at least $33 billion in agricultural losses. Indeed, severe drought continued to affect crops and pastures in the Great Plains and threaten barge traffic on the Mississippi River into the end of the year.

1) Super Storm Sandy. October 27-29. One of the three most expensive storms to ever strike the U.S. Far-ranging impacts, but most of the damage concentrated in New Jersey and New York.

2) Midwest Drought. June-December. Some $33 billion in damage to corn, soybeans, and hay.

5) The Great Derecho of 2012. June 29. The band of rapidly-moving severe thunderstorms from the Midwest to the mid-Atlantic left over 4 million homes and businesses without power during a sweltering heat wave.

Shelf cloud from the developing derecho in Chicago on June 29, 2012.

7) March Heat. Simply the warmest March on record across the lower 48 states.