When prey is scarce, large carnivores may gnaw prey to the bone, wearing their teeth down in the process. A new analysis of the teeth of saber-toothed cats and American lions reveals that they did not resort to this behavior just before extinction, suggesting that lack of prey was probably not the main reason these large cats became extinct.

The results, published December 26 in the open access journal PLOS ONE by Larisa DeSantis of Vanderbilt University and colleagues, compares tooth wear patterns from the fossil cats that roamed California 12,000 to 30,000 years ago.

Sabertoothed cats were not limited by food in California during the late Pleistocene. 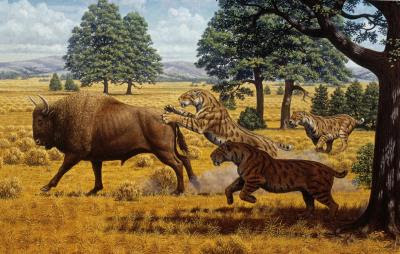 The saber-toothed cat and American lion were among the largest terrestrial carnivores that lived during their time, and went extinct along with other large animals approximately 12,000 years ago. Previous studies have suggested many reasons for this extinction, including a changing climate, human activity and competition from humans and other animals for food, which may have grown scarce as a result of these changes.

In the current study, the authors found that saber-toothed cats likely consumed carcass bones regularly, but found no differences in bone consumption between older fossils and more recent ones. Based on this, they suggest that the cats' diet did not change significantly near the time they became extinct. In contrast, American lions did not consume much bone even near extinction, and had tooth-wear patterns similar to cheetahs, who actively avoid bone in their prey.

"Tooth wear patterns suggest that these cats were not desperately consuming entire carcasses, as was expected, and instead seemed to be living the 'good life' during the late Pleistocene, at least up until the very end," says DeSantis.

The study reveals previously unknown differences in the food habits of saber-toothed cats and American lions, and also suggests that though the case of their extinction is still unknown, a lack of food was probably not the main reason.