Meteorites that had fallen from an asteroid impact that lit up the skies over California and Nevada in April are showing scientists just how complex an asteroid surface can be. A new study published in Science this week by an international team of researchers describes the speedy recovery of the meteorites and reports that this space rock is an unusual example from a rare group known as carbonaceous chondrites, which contain some of the oldest material in the solar system. The study of these meteorites and others like them could hold answers to unsolved mysteries about the origin of life on Earth as they contain molecules such as water and amino acids.

"We found that this meteorite is a 'breccia,' a mixture of different rocks that accumulated at the surface of a larger asteroid, and those surfaces can be more diverse than we thought before," said co-author Denton Ebel, chair of the Division of Physical Sciences at the American Museum of Natural History.

These are some of the 77 fragments of the Sutter’s Mill meteorite fall that were collected in April 2012. 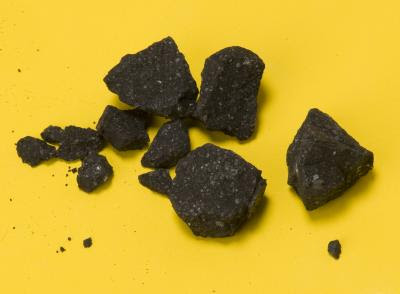 About eight months ago, several Doppler weather radars detected a hail of rocks following a fireball traveling at a record-breaking 28.6 kilometers per second (about 64,000 miles per hour) over the Sierra Nevada in northern California. An immediate search-and-recover mission, led by NASA Ames Research Center, the SETI Institute, and the University of California, Davis, resulted in the retrieval of 77 meteorites. The fragments, which were in pristine shape despite entering the atmosphere at a speed twice as fast as a typical meteorite fall, were collectively called the Sutter's Mill meteorite after the nearby historical site that started the California Gold Rush.

"From the loud sonic boom, we quickly realized that this was an asteroid several meters in size, the biggest object to hit over land since the impact of asteroid 2008 TC3 in the north of Sudan in 2008," said lead author and meteor astronomer Peter Jenniskens of NASA Ames and SETI. "That asteroid proved to be a mixed bag of different types of meteorites, and we realized it would be very interesting to find out how diverse the Sutter's Mill meteorites were."

Several fragments were sent to laboratories around the world for simultaneous analysis of the meteorite's mineralogy and structure. The Sutter's Mill meteorite was classified as a CM chondrite, C standing for carbonaceous—high in carbon content—and M standing for the group's type specimen, the Mighei meteorite that fell in Ukraine in the late 1800s.

Ebel received five Sutter's Mill meteorites to study using x-ray computed tomography (CT), an imaging technique that takes pictures of the inside of a specimen without destroying it. The Museum's scanner takes more than 1,000 x-ray images of the object as it rotates inside of the machine. The data collected from these x-rays are then converted by computers to form a 3-D image of the specimen's interior, one slice at a time, to understand the components of the meteorite.

"In the same way that medical tomography, called CAT scanning, is used to image the interior of the human body, CT scanning in a research laboratory allows us to obtain images of the interiors of solid objects, but with a much higher resolution," Ebel said. "This is a fundamentally important tool not just for looking at rocks but for curating them and figuring out whether anything interesting is inside."

CT scans at the Museum, and at the University of California, Davis in an effort led by cosmochemist Qing-Zhu Yin, revealed that no two Sutter's Mill meteorites are the same. The meteorites contained angular pieces of different composition and density. They showed diversity on millimeter scale.

"This was the first time that a CM chondrite was found to be clearly a breccia," Yin said. "The rocky fragments came together following impacts on the parent asteroid, which implies that this meteorite originated from near its surface."

Analyses performed using different techniques at other institutions were in agreement: the mineralogy and other geochemical features of these fragments are unexpectedly diverse and complex. This suggests that the surface of the asteroid that spawned the CM chondrites, their "parent body," is more complex than previously thought.

"This meteorite is special because it records many collisional processes and mixing that we, oddly, don't see very often," Ebel said. "Maybe the real question is 'why don't we see more of this?' It could be that most of the samples we've worked with in the past didn't hold up very well as they entered the atmosphere. Or that we're just seeing a small segment of what's really out there because we don't have meteorite records of what fell to the Earth thousands or millions of years ago. We still have a lot of work to do to figure out what's really going on in the asteroid belt."