Nibiru And The Threat To Earth: The World Will End Just Not This Month Says Bucknell Astronomer

This year's winter solstice took place on Dec. 21, the same date on which some believed the world would come to an end, coinciding with the end of the Mayan long-count calendar. Doomsday prophecies even prompted NASA to address people's concerns. Bucknell University Associate Professor of Physics and Astronomy Ned Ladd says the world will end, just not this month. 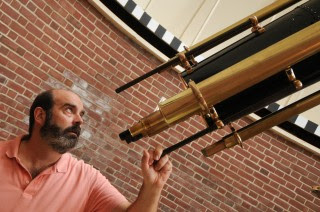 Question: One popular theory among Doomsdayers is a collision between Earth and a planet named "Nibiru." Should we be concerned?

Answer: Many forecasts of doom, including the Nibiru fable, involve a collision between the Earth and another celestial object — a giant asteroid, comet, or rogue planet. There's a kernel of truth to this idea. The Earth has been smacked by celestial objects in its past — some of them big enough to cause global change. Perhaps the most famous of these is the "asteroid that killed the dinosaurs," an object about 5 to 10 miles across that impacted Earth about 65 million years ago and radically changed our ecosystem.

So an impact like this can happen, but it's a very rare event. We know it's rare because we've scanned the skies for objects large enough to cause trouble. NASA's Near Earth Object Program searches for these objects and monitors the positions and orbits of those they detect. With modern technology, we can detect all objects of dino-killing size, and quite a bit smaller. There are no large objects which present a collision danger.

Artist’s conception of the rogue planet Nibiru, or Planet X. The Nibiru story involves a collision between Earth and a heretofore undetected Earth-sized planet that comes careening in from our outer solar system. An object that large would be easy to detect, even if it were still far out in the distant reaches of our solar system. It's just not out there.

Q: Another Doomsday prediction calls for a unique planetary alignment to bring about the end of the world. What impact do celestial alignments have on Earth?

A: Celestial alignment can produce spectacularly beautiful sights, but they have little or no physical significance. Perhaps the most famous of these is the alignment of the Earth, Moon, and Sun that produces solar and lunar eclipses. Planetary alignments are a little less spectacular, since the planets themselves look like bright "stars" in our night sky. There's no evidence that planetary alignments affect Earth processes in any way. The only conceivable interaction would involve the combined gravitational pull of the aligning planets, but the planets are so far away that the gravitational forces they exert on the Earth are minute.

Exceptions are the Sun and Moon, which are close enough (in the case of the Moon) or massive enough (the Sun) to influence the motion of water in our oceans and produce tides. Tidal torques act to slow the Earth's rotation rate, but only by a tiny amount — a "day" today is about 30 milliseconds longer than it was 2000 years ago. There's nothing out there capable of changing the Earth's rotation rate any more quickly than this.

Q: What about the theory that a black hole in the center of the galaxy will swallow up Earth?
A: Black holes are marvelous and real celestial objects surrounded by such strong gravitational fields that even light cannot escape. Of course, you have to be near enough to one of these monsters to experience those high gravity effects, and black holes are pretty small by celestial standards. Even the super-massive black hole at the center of our galaxy, an enormous beast with a mass at least a million times that of the Sun, produces extreme effects only very locally. That black hole is more than 27,000 light years away, so we're safely out of the danger zone.

Q: Doomsday aside, will Earth one day cease to exist?

A: When you start to consider really long time scales, like millions or billions of years, events that are extremely unlikely to happen anytime soon become almost certain to happen. For example, there's virtually no risk of a large asteroid impacting Earth in the next 100 years, but it's very likely that one will hit us in the next 100 million years. A large one, say 10 miles across or larger, could have devastating effects on our ecosystem, and probably could be called an "extinction event."

If rocks from space don't get us first, then we'll start to have a problem with the Sun in about two billion years. As the Sun ages it will puff up in size and become more luminous, slowly raising the temperatures on Earth. Eventually, our oceans will boil away and our atmosphere will become thick with water vapor and carbon dioxide, creating a runaway greenhouse effect like that on the planet Venus. By then temperatures on our dry, barren planet will be above 1000 degrees, and it's hard to see how we might survive in that environment.

But all of these events will take place in what we sometimes call the "deep future." I suspect there are many more pressing issues, such as climate change, the spread of nuclear materials, and the poisoning of our environment, that should demand our more immediate attention. If we don't survive those challenges, the astrophysical threats millions of years in our future are irrelevant.