The Upland Moa (Megalapteryx didinus) was a species of Moa bird endemic to New Zealand. Ratites are flightless birds with a sternum without a keel. They also have a distinctive palate. It was the last moa species to become extinct, vanishing around 1500. It has been ascertained that this moa resided on the South Island only and in high-altitude beech forest 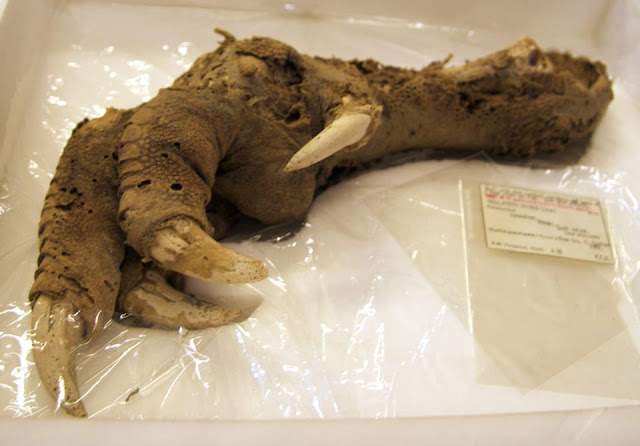 It was the last moa species to become extinct, vanishing around 1500. The Upland Moa was around 1.3 metres tall and weighing perhaps 25 kilos, according to nzbirds.com. It was one of the smallest of the moa species, the upland counterpart to the Little Bush Moa. As its name implies, it lived in the higher, cooler parts of the country, browsing in the high country forests, and in summer on the shrubs and herbs of the subalpine zone. As far as we know, the Upland Moa was unique to the South Island. From a mummified find, a foot, we know that, unlike other Moa, this one had feathers right down to its ankle — probably an adaptation to its cold home.

In 1878, H.L. Squires obtained near Queenstown the remains of a Moa with the skin still attached to the head and feet. Part of this was fowarded to the British Museum a few years afterwards and was the basis of the species Dinornis didinus of Owen. Two nearly complete skeletons are known, one found at Pokororo and now in the British Museum, and the other found near Cromwell and now preserved in the Dominion Museum, Wellington, according to nzbirds.com.