Vortex At South Pole Of Titan, See The Movie

Data from NASA's Cassini spacecraft tie a shift in seasonal sunlight to a wholesale reversal, at unexpected altitudes, in the circulation of the atmosphere of Saturn's moon Titan. At the south pole, the data show definitive evidence for sinking air where it was upwelling earlier in the mission. So the key to circulation in the atmosphere of Saturn's moon Titan turned out to be a certain slant of light. The paper was published today in the journal Nature.

"Cassini's up-close observations are likely the only ones we'll have in our lifetime of a transition like this in action," said Nick Teanby, the study's lead author who is based at the University of Bristol, England, and is a Cassini team associate. "It's extremely exciting to see such rapid changes on a body that usually changes so slowly and has a 'year' that is the equivalent of nearly 30 Earth years."

This artist's impression of Saturn's moon Titan shows the change in observed atmospheric effects before, during and after equinox in 2009.

In our solar system, only Earth, Venus, Mars and Titan have both a solid surface and a substantial atmosphere - providing natural laboratories for exploring climate processes. "Understanding Titan's atmosphere gives us clues for understanding our own complex atmosphere," said Scott Edgington, Cassini deputy project scientist at NASA's Jet Propulsion Laboratory, Pasadena, Calif. "Some of the complexity in both places arises from the interplay of atmospheric circulation and chemistry."

The pole on Titan that is experiencing winter is typically pointed away from Earth due to orbital geometry. Because Cassini has been in orbit around Saturn since 2004, it has been able to study the moon from angles impossible from Earth and watch changes develop over time. Models have predicted circulation changes for nearly 20 years, but Cassini has finally directly observed them happening - marking a major milestone in the mission.

This true color image captured by NASA'S Cassini spacecraft before a distant flyby of Saturn's moon Titan on June 27, 2012, shows a south polar vortex, or a mass of swirling gas around the pole in the atmosphere of the moon. 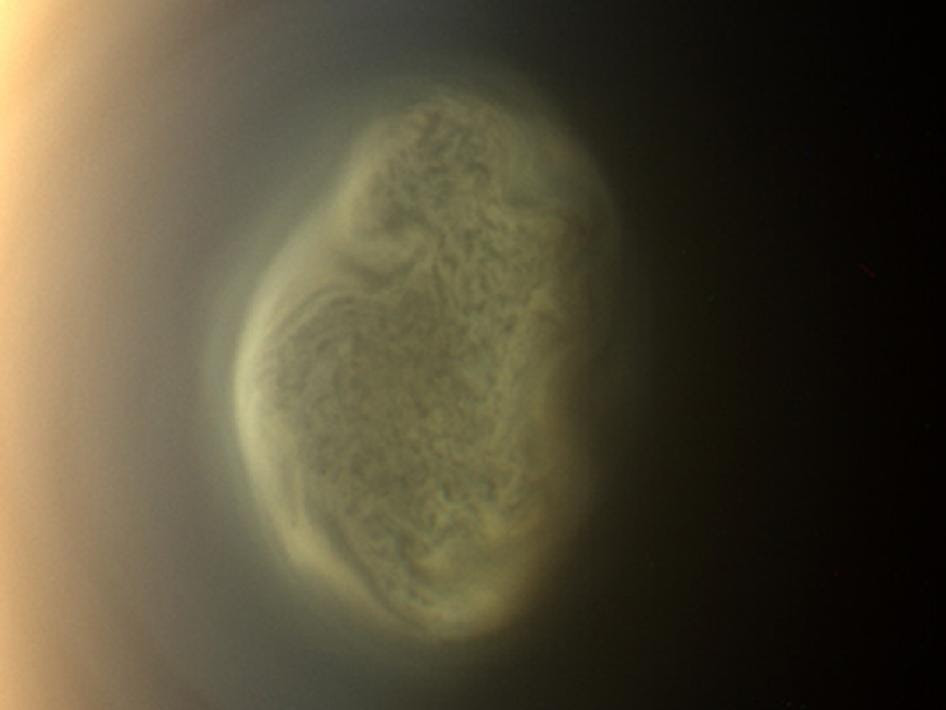 Since Cassini arrived in the Saturn system in 2004, Titan has had a visible "hood" high above the north pole (see PIA08137). It was northern winter at Cassini's arrival, and much of the high northern latitudes were in darkness. But the hood, an area of denser, high altitude haze compared to the rest of the moon's atmosphere, was high enough to be still illuminated by sunlight. The seasons have been changing since Saturn's August 2009 equinox signaled the beginning of spring in the northern hemisphere and fall in the southern hemisphere for the planet and its many moons. Now the high southern latitudes are moving into darkness. The formation of the vortex at Titan's south pole may be related to the coming southern winter and the start of what will be a south polar hood.

Other Cassini instruments recently obtained images of the formation of haze and a vortex over Titan's south pole, but the data from the composite infrared spectrometer (CIRS) is sensitive to much higher altitudes, provides more quantitative information and more directly probes the circulation and chemistry. The CIRS data, which enable scientists to track changes in atmospheric temperature and the distribution of gases like benzene and hydrogen cyanide, also revealed changes in hard-to-detect vertical winds and global circulation.

Besides the evidence for sinking air, Cassini also detected complex chemical production in the atmosphere at up to 400 miles (600 kilometers) above the surface, revealing the atmospheric circulation extends about 60 miles (100 kilometers) higher than previously expected. Compression of this sinking air as it moved to lower altitudes produced a hot spot hovering high above the south pole, the first indication of big changes to come. The scientists were also able to see very rapid changes in the atmosphere and pinpoint the circulation reversal to about six months around the August 2009 equinox, when the sun shone directly over Titan's equator. The circulation change meant that within two years of equinox, some gases had increased in abundance 100-fold - much more extreme than anything seen so far on Titan.

The results also suggest that a detached layer of haze (first detected by NASA's Voyager spacecraft) may not be so detached after all, since complex chemistry and vertical atmospheric movement is occurring above this layer. This layer may instead be the region where small haze particles combine into larger, but more transparent, clumped aggregates that eventually descend deeper into the atmosphere and give Titan its characteristic orange appearance.

"Next, we would expect to see the vortex over the south pole build up," said Mike Flasar, the CIRS principal investigator at NASA's Goddard Space Flight Center in Greenbelt, Md. "As that happens, one question is whether the south winter pole will be the identical twin of the north winter pole, or will it have a distinct personality? The most important thing is to be able to keep watching as these changes happen."

The Cassini-Huygens mission is a cooperative project of NASA, the European Space Agency and the Italian Space Agency. NASA's Jet Propulsion Laboratory manages the mission for NASA's Science Mission Directorate, Washington, D.C. The visual and infrared mapping spectrometer team is based at the University of Arizona, Tucson. The composite infrared spectrometer team is based at NASA's Goddard Space Flight Center in Greenbelt, Md., where the instrument was built. JPL is a division of Caltech.

See PIA14920  movie captured with a similar view and showing the polar vortex in motion.

These new, more detailed images are only possible because of Cassini's newly inclined orbits, which are the next phase of Cassini Solstice Mission. Previously, Cassini was orbiting in the equatorial plane of the planet, and the imaging team's images of the polar vortex between late March and mid-May were taken from over Titan's equator. At that time, images showed a brightening or yellowing of the detached haze layer on the limb, or edge of the visible disk of the moon, over the south polar region.

Scientists think these new images show open cell convection. In open cells, air sinks in the center of the cell and rises at the edge, forming clouds at cell edges. However, because the scientists can't see the layer underneath the layer visible in these new images, they don't know what mechanisms may be at work.