The Earth As Never Seen Before: First-Ever Hyperspectral Images

Hoping to expand our understanding of auroras and other fleeting atmospheric events, a team of space-weather researchers designed and built NORUSCA II, a new camera with unprecedented capabilities that can simultaneously image multiple spectral bands, in essence different wavelengths or colors, of light.

The camera was tested at the Kjell Henriksen Observatory (KHO) in Svalbard, Norway, where it produced the first-ever hyperspectral images of auroras—commonly referred to as "the Northern (or Southern) Lights"—and may already have revealed a previously unknown atmospheric phenomenon.

The aurora as seen as a color composite image from the NORUSCA II camera. Three bands were combined to make the image. Each band was assigned a different color -- red, green, and blue -- to enhance the features of the aurora for analysis. 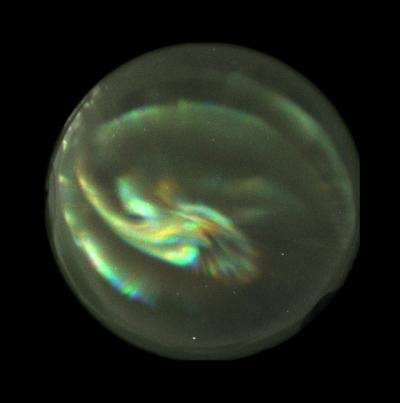 Details on the camera and the results from its first images were published today in the Optical Society's (OSA) open-access journal Optics Express.

Auroras, nature's celestial fireworks, are created when charged particles from the Sun penetrate Earth's magnetic field. These shimmering displays in the night sky reveal important information about the Earth-Sun system and the way our planet responds to powerful solar storms. Current-generation cameras, however, are simply light buckets—meaning they collect all the light together into one image—and lack the ability to separately capture and analyze multiple slivers of the visible spectrum. That means if researchers want to study auroras by looking at specific bands or a small portion of the spectrum they would have to use a series of filters to block out the unwanted wavelengths. 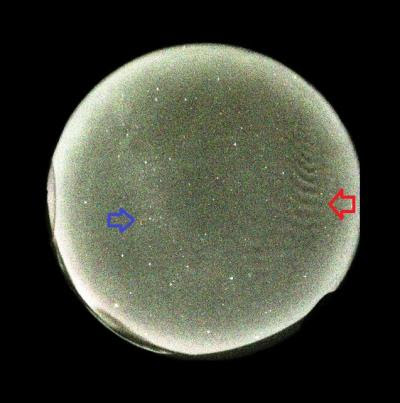 The new NORUSCA II hyperspectral camera achieves the same result without any moving parts, using its advanced optics to switch among all of its 41 separate optical bands in a matter of microseconds, orders of magnitude faster than an ordinary camera. This opens up new possibilities for discovery by combining specific bands of the same ethereal phenomenon into one image, revealing previously hidden details.

"A standard filter wheel camera that typically uses six interference filters will not be able to spin the wheel fast enough compared to the NORUSCA II camera," said Fred Sigernes of the University Centre in Svalbard (UNIS), Norway. "This makes the new hyperspectral capability particularly useful for spectroscopy, because it can detect specific atmospheric constituents by their unique fingerprint, or wavelengths, in the light they emit."

These spectral signatures can then reveal subtle changes in atmospheric behavior, such as the ionization of gases during auroras. This form of multispectral imaging also will enable scientists to better classify auroras from background sky emissions and study the way they cluster in the atmosphere.

On Jan. 24, 2012, during the inaugural research campaign of NORUSCA II, a major solar flare jettisoned a burst of high-energy particles known as a Coronal Mass Ejection (CME). The CME eventually slammed into Earth's magnetic field, producing magnificent auroras and a chance to fully test the new camera.

The researchers were able to image the aurora in unprecedented clarity through a layer of low altitude clouds, which would have thwarted earlier-generation instruments (see Image 1). The camera also revealed something unexpected—a very faint wave pattern of unknown origin in the lower atmosphere (see Image 2). The wave pattern resembles "airglow"—the natural emission of light by Earth's atmosphere. Airglow can be produced by a variety of known sources, including cosmic rays striking the upper atmosphere and chemical reactions. Its concurrent appearance with the aurora suggests that it may also be caused by a previously unrecognized source.

This shows an aurora appearing in the night sky at the Kjell Henriksen Observatory in Svalbard, Norway. Taken November 2010. 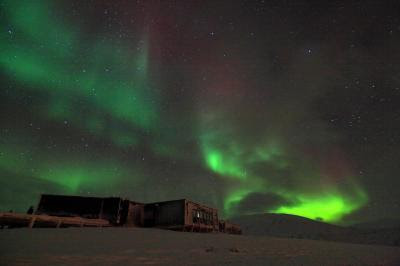 "After the January CME, we think we saw an auroral-generated wave interaction with airglow," said Sigernes. This would be an entirely new phenomenon and if confirmed, would be the first time airglow has been associated with auroras.

"Our new all-sky camera opens up new frontiers of discovery and will help in the detection of auroras and the understanding of how our Sun impacts the atmosphere here on Earth. Additional development and commissioning will also hopefully verify our intriguing first results," concludes Sigernes.