NASA's Cassini spacecraft has been traveling the Saturnian system in a set of inclined, or tilted, orbits that give mission scientists a vertigo-inducing view of Saturn's polar regions. This perspective has yielded images of roiling storm clouds and a swirling vortex at the center of Saturn's famed north polar hexagon.
First seen in 2008, these images from NASA's Cassini spacecraft reveal a giant cyclone at Saturn's north pole, and show that a similarly monstrous cyclone churning at Saturn's south pole is powered by Earth-like storm patterns and is still raging four years later.


In 2008, the cyclone at Saturn's north pole was only visible in the near-infrared wavelengths because the north pole is in winter, thus in darkness to visible-light cameras. At these wavelengths, about seven times greater than light seen by the human eye, the clouds deep inside Saturn's atmosphere are seen in silhouette against the background glow of Saturn's internal heat.

This image from NASA's Cassini mission was taken on Nov. 27, 2012, with Cassini's narrow-angle camera. 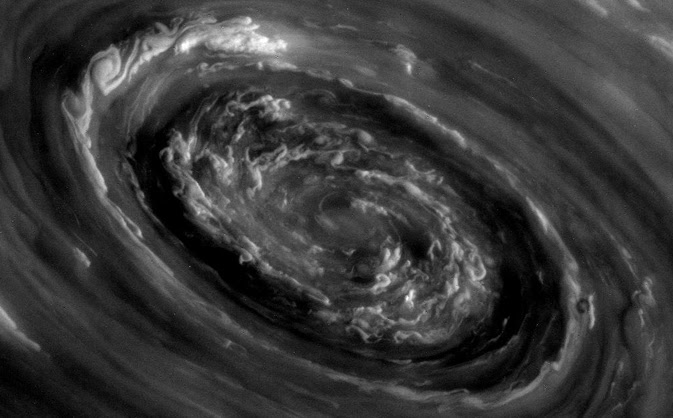 "These are truly massive cyclones, hundreds of times stronger than the most giant hurricanes on Earth," said Kevin Baines, Cassini scientist in 2008 on the visual and infrared mapping spectrometer at NASA's Jet Propulsion Laboratory, Pasadena, Calif. "Dozens of puffy, convectively formed cumulus clouds swirl around both poles, betraying the presence of giant thunderstorms lurking beneath. Thunderstorms are the likely engine for these giant weather systems," said Baines.

The entire north pole of Saturn is now mapped in detail in infrared, with features as small as 120 kilometers (75 miles) visible in the images. Time-lapse movies of the clouds circling the north pole show the whirlpool-like cyclone there is rotating at 530 kilometers per hour (325 miles per hour), more than twice as fast as the highest winds measured in cyclonic features on Earth. This cyclone is surrounded by an odd, honeycombed-shaped hexagon, which itself does not seem to move while the clouds within it whip around at high speeds, also greater than 500 kilometers per hour (300 miles per hour). Oddly, neither the fast-moving clouds inside the hexagon nor this new cyclone seem to disrupt the six-sided hexagon.

New Cassini imagery of Saturn's south pole shows complementary aspects of the region through the eyes of two different instruments. Near-infrared images from the visual and infrared mapping spectrometer instrument show the whole region is pockmarked with storms, while the imaging cameras show close-up details.

The camera was pointing toward Saturn from approximately 233,742 miles (376,171 kilometers) away. 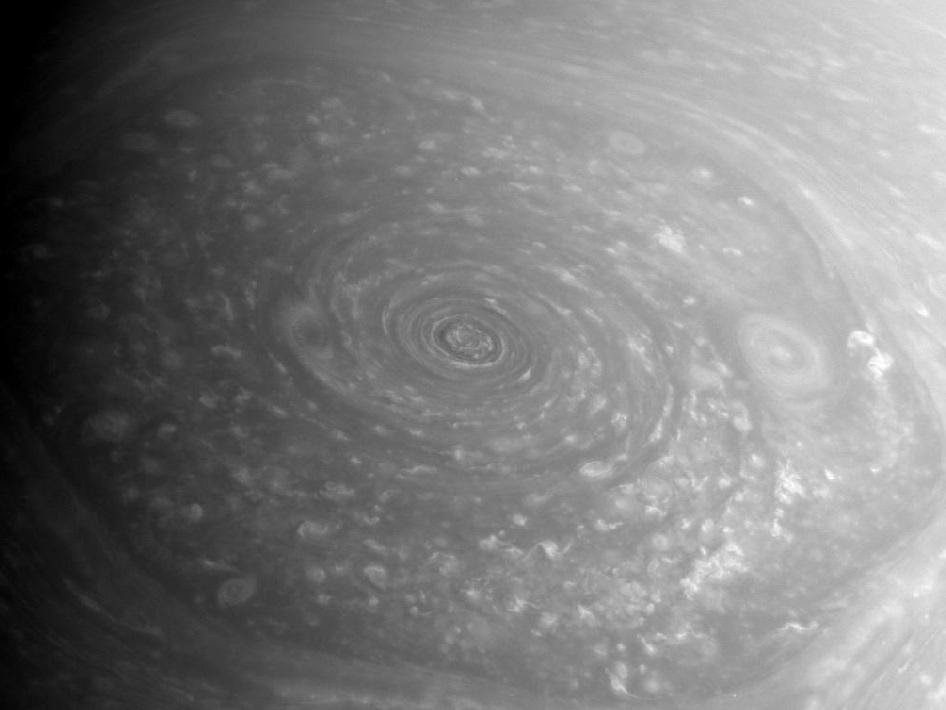 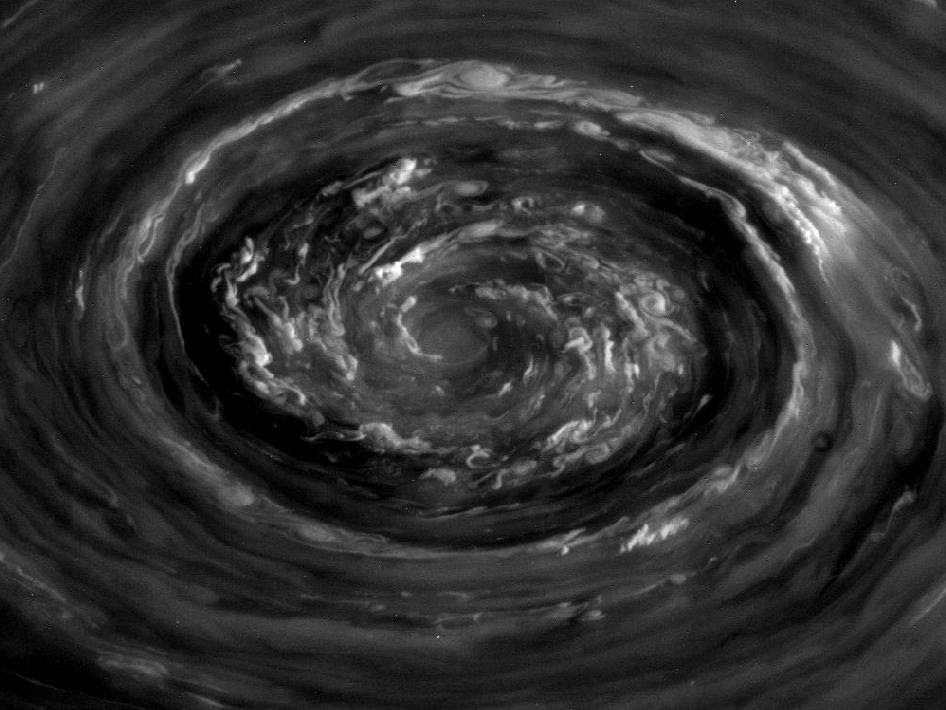 NASA's Cassini spacecraft has been traveling the Saturnian system in a set of inclined, or tilted, orbits that give mission scientists a vertigo-inducing view of Saturn's polar regions. This perspective has yielded images of roiling storm clouds and a swirling vortex at the center of Saturn's famed north polar hexagon.

These phenomena mimic what Cassini found at Saturn's south pole a number of years ago. Cassini has also seen storms circling Saturn's north pole in the past, but only in infrared wavelengths because the north pole was in darkness. (See http://www.jpl.nasa.gov/news/news.php?release=2008-192 .) But, with the change of the Saturnian seasons, the sun has begun to creep over the planet's north pole.

This near-infrared movie of Saturn’s north pole shows a giant cyclone, encircled by a hexagon feature. The movie was created from several images, taken by the visual and infrared mapping spectrometer onboard the Cassini spacecraft.

The hexagon itself is populated by fast-moving clouds which reach speeds of over 530 kilometers per hour (300 miles per hour). The discrete, circular and oblong clouds dotting the image are likely convective upwelling originating deep inside the planet, which help power the cyclones. The movie shows clouds throughout the atmosphere, down to as deep as 125 kilometers (78 miles) below the haze. Many of the features seen are thought to be deep-level clouds of ammonia-hydrosulfide, which rise to higher altitudes in convective updrafts.

More raw images are available at http://saturn.jpl.nasa.gov/photos/raw/index.cfm. The Cassini-Huygens mission is a cooperative project of NASA, the European Space Agency and the Italian Space Agency. JPL, a division of the California Institute of Technology in Pasadena, manages the Cassini-Huygens mission for NASA's Science Mission Directorate, Washington. The Cassini orbiter and its two onboard cameras were designed, developed and assembled at JPL. The imaging team is based at the Space Science Institute in Boulder, Colo.