The picture on the left shows a calm sun from Oct. 2010. The right side, from Oct. 2012, shows a much more active and varied solar atmosphere as the sun moves closer to peak solar activity, a peak known as solar maximum, predicted for 2013. Both images were captured by NASA's Solar Dynamics Observatory (SDO) observing light emitted from the 1 million degree plasma, which is a good temperature for observing the quiet corona. 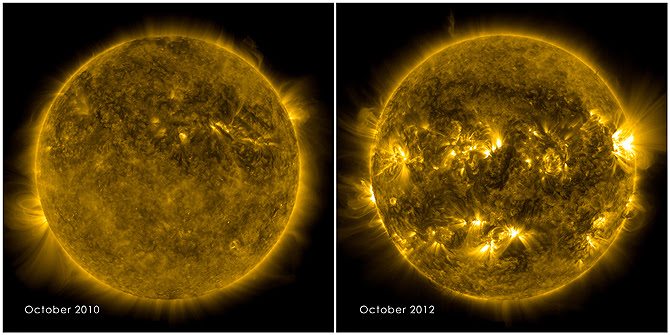 The sun goes through a natural solar cycle approximately every 11 years. The cycle is marked by the increase and decrease of sunspots -- visible as dark blemishes on the sun's surface, or photosphere. The greatest number of sunspots in any given solar cycle is designated as "solar maximum." The lowest number is "solar minimum."

The solar cycle provides more than just increased sunspots, however. In the sun's atmosphere, or corona, bright active regions appear, which are rooted in the lower sunspots. Scientists track the active regions since they are often the origin of eruptions on the sun such as solar flares or coronal mass ejections.

The most recent solar minimum occurred in 2008, and the sun began to ramp up in January 2010, with an M-class flare (a flare that is 10 times less powerful than the largest flares, labeled X-class). The sun has continued to get more active, with the next solar maximum predicted for 2013.

The journey toward solar maximum is evident in current images of the sun, showing a marked difference from those of 2010, with bright active regions dotted around the star.