A team of researchers, including engineers from Los Alamos National Laboratory, has demonstrated a new concept for a reliable nuclear reactor that could be used on space flights.

Heat pipe technology was invented at Los Alamos in 1963. A heat pipe is a sealed tube with an internal fluid that can efficiently transfer heat produced by a reactor with no moving parts. A Stirling engine is a relatively simple closed-loop engine that converts heat energy into electrical power using a pressurized gas to move a piston. Using the two devices in tandem allowed for creation of a simple, reliable electric power supply that can be adapted for space applications.

Researchers configured DUFF on an existing experiment, known as Flattop, to allow for a water-based heat pipe to extract heat from uranium. Heat from the fission reaction was transferred to a pair of free-piston Stirling engines manufactured by Sunpower Inc., based in Athens Ohio. Engineers from NASA Glenn designed and built the heat pipe and Stirling assembly and operated the engines during the experiment. Los Alamos nuclear engineers operated the Flattop assembly under authorization from the National Nuclear Security Administration (NNSA).

DUFF is the first demonstration of a space nuclear reactor system to produce electricity in the United States since 1965, and the experiment confirms basic nuclear reactor physics and heat transfer for a simple, reliable space power system.

“The nuclear characteristics and thermal power level of the experiment are remarkably similar to our space reactor flight concept,” said Los Alamos engineer David Poston. “The biggest difference between DUFF and a possible flight system is that the Stirling input temperature would need to be hotter to attain the required efficiency and power output needed for space missions.”

“The heat pipe and Stirling engine used in this test are meant to represent one module that could be used in a space system,” said Marc Gibson of NASA Glenn. “A flight system might use several modules to produce approximately one kilowatt of electricity.”

Current space missions typically use power supplies that generate about the same amount of electricity as one or two household light bulbs. The availability of more power could potentially boost the speed with which mission data is transmitted back to Earth, or increase the number of instruments that could be operated at the same time aboard a spacecraft.

“A small, simple, lightweight fission power system could lead to a new and enhanced capability for space science and exploration”, said Los Alamos project lead Patrick McClure. “We hope that this proof of concept will soon move us from the old-frontier of Nevada to the new-frontier of outer space”.

John Bounds of Los Alamos National Laboratory's Advanced Nuclear Technology Division makes final adjustments on the DUFF experiment, a demonstration of a simple, robust fission reactor prototype that could be used as a power system for space travel. DUFF is the first demonstration of a space nuclear reactor system to produce electricity in the United States since 1965. 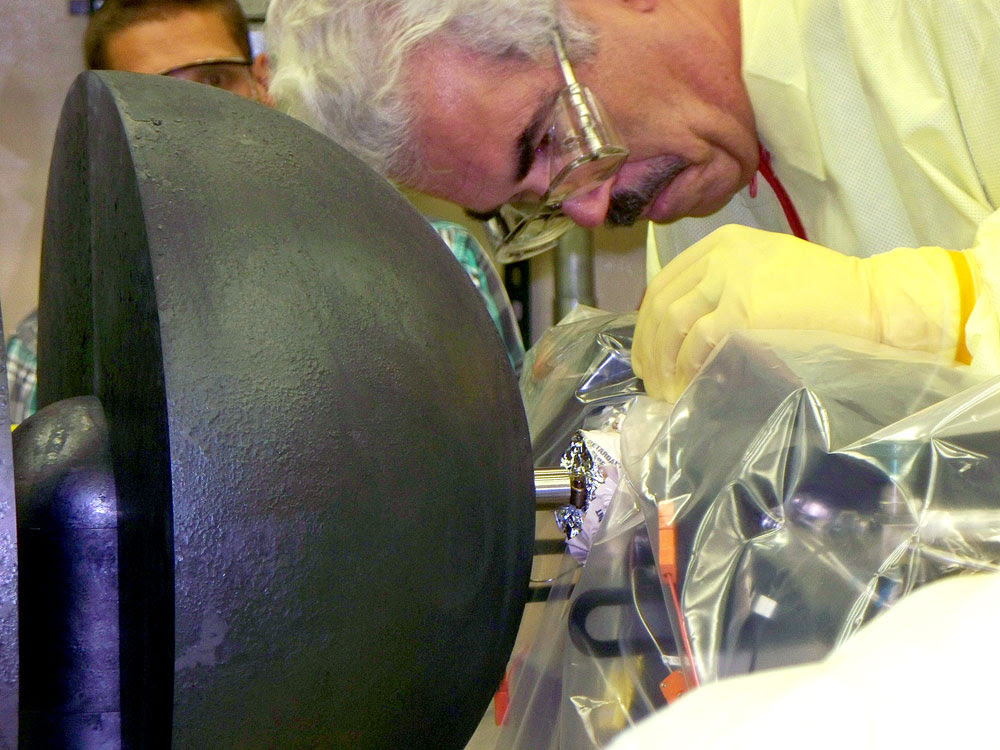 Los Alamos research on the project was made possible through Los Alamos’s Laboratory-Directed Research and Development Program (LDRD), which is funded by a small percentage of the Laboratory’s overall budget to invest in new or cutting-edge research. NASA Glenn and NSTec also used internal support to fund their contributions to the experiment.

“Perhaps one of the more important aspects of this experiment is that it was taken from concept to completion in 6 months for less than a million dollars,” said Los Alamos engineer David Dixon. “We wanted to show that with a tightly-knit and focused team, it is possible to successfully perform practical reactor testing.”

An animation of the new reactor concept. This is the first demonstration of a space nuclear reactor system to produce electricity in the United States since 1965, and an experiment demonstrated the first use of a heat pipe to cool a small nuclear reactor and then harvest the heat to power a Stirling engine at the Nevada National Security Site's Device Assembly Facility confirms basic nuclear reactor physics and heat transfer for a simple, reliable space power system.