A jet of X-rays from a supermassive black hole 12.4 billion light years from Earth has been detected by NASA's Chandra X-ray Observatory. This is the most distant X-ray jet ever observed and gives astronomers a glimpse into the explosive activity associated with the growth of supermassive black holes in the early universe.

The jet was produced by a quasar named GB 1428+4217, or GB 1428 for short. Giant black holes at the centers of galaxies can pull in matter at a rapid rate producing the quasar phenomenon. The energy released as particles fall toward the black hole generates intense radiation and powerful beams of high-energy particles that blast away from the black hole at nearly the speed of light. These particle beams can interact with magnetic fields or ambient photons to produce jets of radiation.

This composite image shows GB 1428+4217, a quasar that contains the most distant X-ray jet ever observed. This view contains X-rays from Chandra (blue), radio data from the Very Large Array (purple), and optical data from Hubble (yellow). The jet, whose shape is very similar in the X-ray and radio data, was produced by a giant black hole, at the center of a galaxy, pulling in matter at a rapid rate. The energy released as particles fall toward the black hole generates intense radiation and powerful beams of high-energy particles that blast away from the black hole at nearly the speed of light. GB 1428+4217 is located about 12.4 billion light years from Earth, surpassing the distance of previously discovered X-ray jets. 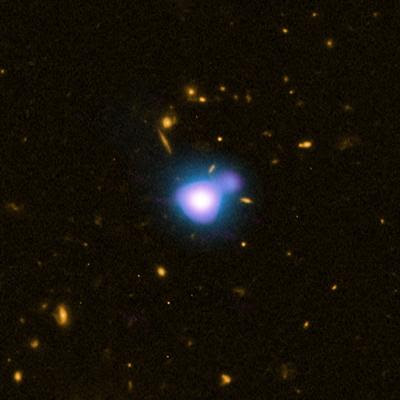 "We're excited about this result not just because it's a record holder, but because very few X-ray jets are known in the early universe," said Teddy Cheung of the National Academy of Sciences, resident at the Naval Research Laboratory in Washington DC, and lead author of the paper describing these results.

As the electrons in the jet fly away from the quasar, they move through a sea of background photons left behind after the Big Bang. When a fast-moving electron collides with one of these so-called cosmic microwave background photons, it can boost the photon's energy into the X-ray band.

"Since the brightness of the jet in X-rays depends, among other things, on how fast the electrons are moving away from the black hole, discoveries like the jet in GB 1428 tell us something about the environment around supermassive black holes and their host galaxies not that long after the Big Bang," said co-author Lukasz Stawarz from the Japan Aerospace Exploration Agency in Kanagawa, Japan.

Because the quasar is seen when the universe is at an age of about 1.3 billion years, less than 10% of its current value, the cosmic background radiation is a thousand times more intense than it is now. This makes the jet much brighter, and compensates in part for the dimming due to distance.

"We're lucky that the universe gives us this natural amplifier and lets us detect this object with relatively short exposures," said co-author Aneta Siemiginowska, of the Harvard-Smithsonian Center for Astrophysics in Cambridge, MA, "Otherwise we might miss important physical processes happening at very large distances from Earth and as far away as GB 1428."

While there is another possible source of X-rays for the jet -- radiation from electrons spiraling around magnetic field lines in the jet -- the authors favor the idea that the cosmic background radiation is being boosted because the jet is so bright.

The particle beams that produce these three extremely distant X-ray jets appear to be moving slightly more slowly than jets from galaxies that are not as far away. This may be because the jets were less energetic when launched from the black hole or because they are slowed down more by their environment.

The researchers think the length of the jet in GB 1428 is at least 230,000 light years, or about twice the diameter of the entire Milky Way galaxy. This jet is only seen on one side of the quasar in the Chandra and VLA data. When combined with previously obtained evidence, this suggests the jet is pointed almost directly toward us. This configuration would boost the X-ray and radio signals for the observed jet and diminish those for a jet presumably pointed in the opposite direction.

Observations were also taken of GB 1428 with a set of radio telescopes at different locations around the Earth that allows details to be resolved on exceptionally small scales. They revealed the presence of a much smaller jet, about 1,900 light years long, which points in a similar direction to the X-ray jet.

This result appeared in the September 1st, 2012 issue of The Astrophysical Journal Letters. Other co-authors of the paper are Doug Gobeille from University of South Florida in Tampa, FL; John Wardle from Brandeis University in Waltham, MA; and Dan Harris and Dan Schwartz from the Harvard-Smithsonian Center for Astrophysics.