Reciprocity Among Chimpanzees and Bonobos: Primate Behavior May Reveal Clues to Evolution of Favor Exchange in Humans

When your neighbor asks to borrow a cup of sugar and you readily comply, is your positive response a function of the give and take that characterize your longstanding relationship? Or does it represent payment –– or prepayment –– for the cup of sugar you borrowed last week, or may need to borrow a month from now?

Adrian Jaeggi, a postdoctoral researcher in anthropology at UC Santa Barbara, and a junior research fellow at the campus's SAGE Center for the Study of the Mind, is studying this question of reciprocity, using chimpanzees and bonobos as his test subjects. His findings appear in the current online issue of the journal Evolution & Human Behavior.

"The article focuses on the question of whether individuals do favors because they expect them to be reciprocated at some other time, and, more specifically, whether such exchanges have to happen immediately, or can take place over longer time spans," Jaeggi explained. "We studied the question in chimpanzees and bonobos –– our two closest living relatives –– and looked at the exchanges of grooming and food sharing, which are two common types of favors among these apes." 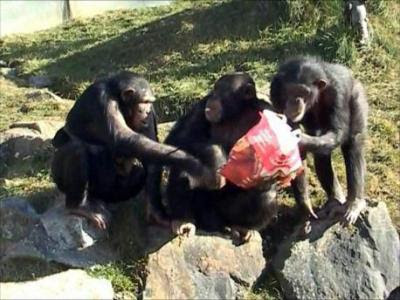 According to Jaeggi, while results of his research provide some evidence for immediate exchanges, they more strongly support the notion that favors are exchanged over long periods of time. Calculated exchanges, in which individuals keep a detailed score of past interactions, are much less common than the more loosely balanced exchanges that take place in stable relationships.

"In the chimp group we studied, we knew there was a lot of this long-term exchange," said Jaeggi. "We didn't find any evidence for a short-term effect." Chimpanzees live in stable social groups, he continued, and have a relatively long life span. They recognize others in the group, form long-term relationships, and associate with individuals who have helped them in the past.

"In the wild, for example, chimps hunt for smaller monkeys, and they commonly share the meat. It's similar to what hunters and gatherers do," Jaeggi said. "Our experiment is meant to mimic the situation in which you have a large monopolized food item." Using grooming as the favor, the researchers studied whether or not a chimp that had just been groomed was more likely to share food with the pal who had groomed him. "That would provide evidence for keeping track of who has done a favor," Jaeggi said. However, grooming releases endorphins, he added, and that general sense of wellbeing on the part of the food owner might lead to more indiscriminate food sharing.

One female bonobo rests her hand on another’s shoulder. 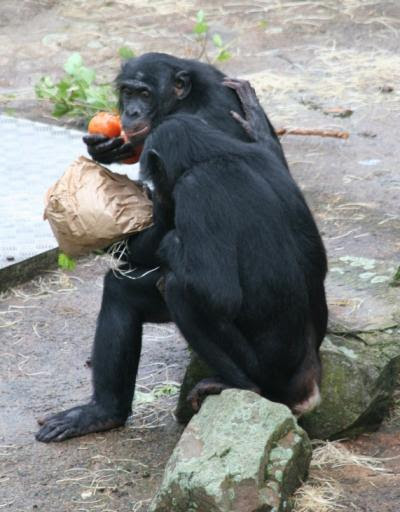 "We found that sharing was predicted by who the chimps' long-term friends and partners were," he said. "Grooming just before didn't play a role. Food owners didn't share specifically with their groomers. Nor did the groomers act in return. They didn't pay for the food, and they didn't reward the food owner's generosity afterward."

Bonobos, on the other hand, presented a different result. While chimpanzees have a formalized dominance hierarchy, food is available to most individuals, no matter what their group status. That is not the case with bonobos. Bonobos don't establish formal hierarchies, so they don't know on an individual basis where they fit within the group. Also, they don't form coalitions as much as chimpanzees do. "The food sharing situation sort of freaked them out," said Jaeggi. "All of a sudden there's all this food that's owned by one individual, and they don't really know what to do about it. They want to get it, but they don't dare, because they don't know what the consequence will be."

Jaeggi added that bonobos did a lot more grooming, most likely because they sought the calming effects of the endorphins. "And there we did see an effect of grooming on sharing," he said. "Chimps would go and take food pretty confidently, but Bonobos were more reticent. They'd reach out and then groom. It seemed to be that they'd groom to release tension, and then there would be these short-term reciprocal exchanges."

But even those exchanges seem to be more a byproduct of the need to reduce tension, he noted, rather than short-term contingencies used to establish reciprocity.

So, what do these findings tell us about ourselves? Jaeggi suggests we should take seriously this evidence of long-term reciprocity in animals. "It's really not qualitatively different from what people do," he said. "They establish these lasting relationships, and within them, services are exchanged without the participants keeping close track of who's doing what for whom."

However, humans also have the capacity for more contingent reciprocity, which raises questions about its purpose, and how it developed. "Maybe that's something that's more culturally learned," said Jaeggi.
on November 20, 2012