New Evidence Of Dinosaurs' Role In The Evolution Of Bird Flight

A new study looking at the structure of feathers in bird-like dinosaurs has shed light on one of nature's most remarkable inventions – how flight might have evolved.

Academics at the University of Bristol , Yale and the University of Calgary have shown that prehistoric birds had a much more primitive version of the wings we see today, with rigid layers of feathers acting as simple airfoils for gliding.

Close examination of the earliest theropod dinosaurs suggests that feathers were initially developed for insulation, arranged in multiple layers to preserve heat, before their shape evolved for display and camouflage.

As evolution changed the configuration of the feathers, their important role in the aerodynamics and mechanics of flight became more apparent.

Natural selection over millions of years ultimately modified dinosaurs' forelimbs into highly-efficient, feathered wings that could rapidly change its span, shape and area – a key innovation that allowed dinosaurs to rule the skies.

This basic wing configuration has remained more or less the same for the past 130 million years, with bird wings having a layer of long, asymmetrical flight feathers with short covert feathers on top. They are able to separate and rotate these flight feathers to gain height, change direction and even hover.

This formation allows birds to move in such a way as to produce both lift and thrust simultaneously – a capability that man, with the help of technology, is still trying to successfully imitate.

The research, published today [21 November] in Current Biology, looked at the dinosaur Anchiornis huxleyi and the Jurassic bird Archaeopteryx lithographica. The latter is 155 million years old and widely considered to be the earliest known bird, presenting a combination of dinosaur and bird characteristics.

The wing of Archaeopteryx lithographica (Berlin specimen), a Jurassic fossil thought to be around 155 million years old 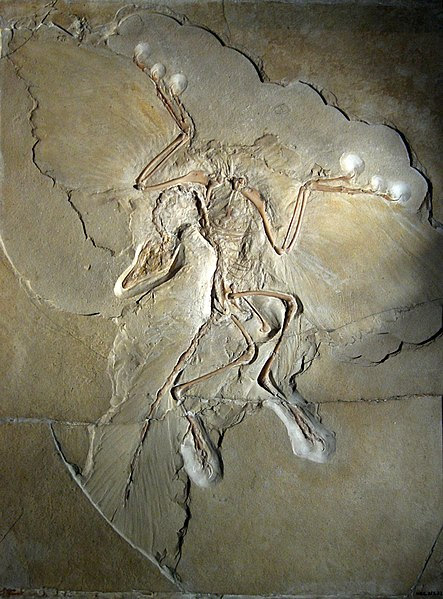 Their wings differed from modern day birds in being composed of multiple layers of long feathers, appearing to represent early experiments in the evolution of the wing.

Although individual feathers were relatively weak due to slender feather shafts, the layering of these wing feathers is likely to have produced a strong airfoil.

The inability to separate feathers suggests that taking off and flying at low speeds may have been limited, meaning that wings were primarily used in high-speed gliding or flapping flight.

Dr Jakob Vinther, from the University of Bristol's Schools of Biological and Earth Sciences, said: "We are starting to get an intricate picture of how feathers and birds evolved from within the dinosaurs. We now seem to see that feathers evolved initially for insulation. Later in evolution, more complex vaned or pinnate feathers evolved for display.

"These display feathers turned out to be excellent membranes that could have been utilized for aerial locomotion, which only very late in bird evolution became what we consider flapping flight. This new research is shedding light not just on how birds came to fly, but more specifically on how feathers came to be the way they are today - one of the most amazing and highly specialized structures in nature."

Dr Nicholas Longrich of Yale University added: "By studying fossils carefully, we are now able to start piecing together how the wing evolved. Before, it seemed that we had more or less modern wings from the Jurassic onwards. Now it's clear that early birds were more primitive and represented transitional forms linking birds to dinosaurs. We can see the wing slowly becoming more advanced as we move from Anchiornis, to Archaeopteryx, to later birds."
on November 21, 2012